Down 10-3 at the half, the Huskies rallied for a 27-17 win over Washington State in the Apple Cup, reaching eight wins for the first time since 2001. 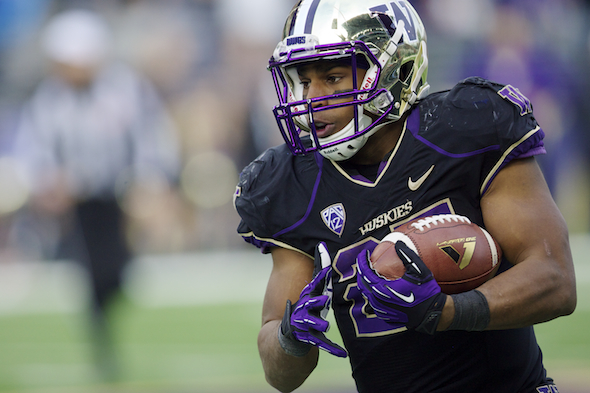 Senior quarterback Keith Price, who had a frustrating first half, threw for a touchdown and ran for another in the second, Bishop Sankey set two significant rushing records and the Washington Huskies reached eight victories for the first time since 2001 with a 27-17 victory over Washington State in the 106th Apple Cup Saturday at Husky Stadium.

The Huskies (8-4) and Cougars (6-6) now await their bowl fates.The Huskies are  projected to play in San Francisco’s Fight Hunger Bowl, but the Cougars’ postseason destination, if any, is more iffy. Washington State is one of nine Pac-12 schools with a requisite six victories, but the conference only has seven guaranteed bowl slots available. Now, WSU will have to rely on an at-large invitation.

Playing his final game in Husky Stadium, Price, who received the start ahead of Cyler Miles, struggled throughout the first half, throwing an interception and coughing up a fumble while throwing for just 72 yards. But in the second half, with Sankey finding his rhythm, Price found a groove too, completing 15 of 20 for 181 yards.

Sankey made the difference. After rushing for 83 yards in the first half, when Washington trailed 10-3, je cranked it up the second half and finished with an even 200 yards and a touchdown. The first of his major moments occurred at 5:16 of the third when he scored on a seven-yard run, giving Washington a 17-10 lead.

That TD, the 35th of Sankey’s career, broke a tie with Napoleon Kaufman for most in Washington history. The seven yards Sankey gained on the play gave Sankey 1,696 for the season, breaking the single-season school record of 1,695 by Corey Dillon in 1996.

But Sankey’s biggest play Saturday occurred early in the third quarter when he caught a short screen from Price and took it 40 yards, setting up a Price pass to Austin Seferian-Jenkins pass for a touchdown that tied the game at 10. From that moment, Washington was in control.

“I thank our coaches for allowing me to carry the rock this far,” said Sankey, who posted his third 200-yard rushing game of the season, tying another Kaufman record.

“Our seniors are walking out of here today knowing they left the program better than what they found it. It wasn’t easy for (Keith) Price but it was a matter of allowing the game to come to him and let him go make his plays.”

“They got a win last year,” said Price, who threw a key interception late in Washington’s 2012 loss, “and we could not let that happen again.”

WSU quarterback Connor Halliday threw for 282 yards and two touchdowns and set a Pac-12 record for single-season completions, but finished nearly 100 yards under his per-game average (355.0) and tossed two picks. The Huskies hounded him relentlessly, sacking him five times.

A 32-yard completion from Price to Seferian-Jenkins set up a Travis Coons 48-yard field goal, his longest of the season, for a 3-0 Washington lead 2:47 into the game. Neither the Huskies nor the Cougars could mount a scoring drive until early in the second quarter when, following a Price fumble, Andrew Furney booted a 49-yard field goal, his longest, to tie the score 3-3.

Price and Seferian-Jenkins had a miscommunication breakdown on a long pass attempt, and Nolan Richardson intercepted for the Cougars, who went on the first sustained drive of the game. Teondray Caldwell had a 20-yard run and collaborated with Halliday on a 13-yard completion before Halliday threw a 14-yard TD pass to Ricky Galvin for a 10-3 lead.

The Cougars dominated the first half, running up 16 first downs and 182 yards to Washington’s seven and 144, and controlling the clock for 19:05 to UW’s 10:55. Washington’s biggest edge: Three sacks of Halliday. Offensively, the Huskies did little, converting only one of six third downs.

But on their first drive of the second half, the Huskies marched 85 yards in eight plays with Price throwing 18 yards to Seferian-Jenkins for the tying touchdown. Price’s 40-yard screen to Sankey and Sankey’s 18-yard run set up the score.

Sankey gave the Huskies a 17-10 at 5:16 of the third quarter when he scored on a seven-yard run, breaking two records on the same play.

Coons hit his second field goal, from 39 yards, at 1:03 of the third, but Washington State completed a 10-play, 83-yard drive when Halliday threw a five-yard TD to Dom Williams, bringing the Cougars to within 20-17. Halliday converted a fourth-and 15 to Williams to keep alive the drive, which the Huskies extended when linebacker John Timu was flagged for a personal foul.

The Huskies, who entered averaging 525 yards in total offense, finished with 405, including 224 rushing.