Cougars ask ‘what if’ after Apple Cup loss

The Cougars lamented a series of what-ifs that might have earned another Apple Cup upset. But the 10-3 halftime lead withered in a nine-minute Huskies’ blitz. 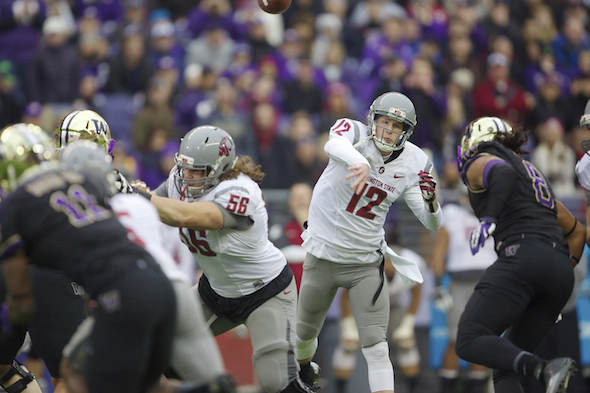 WSU (6-6, 4-5 Pac-12) was a few plays from taking the Apple Cup for a second year in a row, a botch or two from guaranteeing itself a bowl berth. The snafus resonated in the moments after their 27-17 loss in the 106th version of the cross-state rivalry.

What if, leading 10-3 with seven seconds remaining in the first half, holding one timeout, WSU coach Mike Leach let stud kicker Andrew Furney try a 52-yard field goal rather than call for a quick pass?

UW’s Hau’oli Kikaha busted through the line and sacked Halliday for a 10-yard loss. The half ended, and with it the chance to take a two-score lead.

“We were trying to throw a five-yard out to the right to get Furney in distance to kick a field goal,” Halliday said after going 32 of 59 for 282 yards, two touchdowns and two interceptions. “They dropped underneath that. We had 10 guys on the field. Rickey Galvin ran off the field so we were only playing with 10.”

What if, still up 10-3 after the offense sputtered near midfield on their opening drive of the second half, the Cougars, defending a third-and-five, snuffed out Bishop Sankey’s 40-yard screen pass?

WSU to that point was stout against UW’s run, and flummoxed Huskies senior quarterback Keith Price.

Cornerback Nolan Washington intercepted him early in the second quarter inside the WSU 10. Price fumbled near the end of the first quarter when WSU defensive end Xavier Cooper clobbered him in the backfield.

WSU responded with a 49-yard strike from Furney to knot it at three.

The Cougars zapped the energy from Husky Stadium with 4:25 left in the first half with a 13-play, 91-yard drive, highlighted when Halliday lobbed a perfect pass to Galvin for a 14-yard touchdown. The Cougars led 10-3.

The 71,753 in attendance didn’t regain the mojo until the screen to Sankey.

“I thought that was pretty big,” Leach said of UW’s conversion on their first drive of the third quarter. “If we had kept them pinned back it was going to increase the pressure on them and certainly the tempo of the second half.”
They didn’t. The Huskies scored five plays later when Price found tight end Austin Seferian-Jenkins for an 18-yard touchdown pass, tying it at 10.

WSU followed with a three-and-out, and the Huskies countered with an eight-play, 60-yard drive, capped with 5:16 left in the third quarter when Sankey took it through the right side from seven yards out.

The Huskies forced another punt, then added a 39-yard Travis Coons field goal late in the third to take a 20-10 lead.

“Their playmakers stepped up, to be honest,” WSU safety Deone Bucannon said afterward. “Bishop Sankey and Keith Price either made a decision going into the halftime that they were going to carry the team, or I don’t know what happened.”

A miscommunication between Halliday and Bosch was the meltdown’s apex. At the beginning of the fourth quarter, WSU marched inside the UW 40. On third-and-two, Halliday kept the ball in a read-option play and went down for a one-yard loss.

He came up screaming at Bosch, his college roommate, hands gesturing wildly. Attempting to make it up on fourth down, Halliday was flustered. The ball slipped out of his hands when he tried to hit a crossing route, and fell incomplete.

“It was just a miscommunication on snap count,” Bosch said. “It happens at times. It was noisy and everyone was excited. There were some emotions, which is fine.”

But the Cougars weren’t done.

After forcing a UW punt, WSU again moved inside the Huskies 40, then faced a 4th and 15.

Halliday floated a 22-yard completion to Dom Williams, who took the brunt of a helmet-first hit from UW linebacker John Timu. The conversion and a 15-yard targeting penalty took WSU down to the UW eight. Halliday struck two plays later by finding Williams again, this time from five yards out.

Trailing 20-17, the Cougars had one more chance with a bit more than five minutes left, but UW cornerback Gregory Ducre picked Halliday at the WSU 28. Halliday intended to throw it at WR Isiah Myers’ back shoulder, but the pair didn’t make eye contact, and Myers didn’t look back.

Another miscommunication. Another “what if.”

Leach was not in a mood to reflect.

“I don’t have any retrospect,” Leach said.

He is most likely alone.