Sarkisian’s Loss: A Blow Or An Opportunity?

The Huskies made it official late Monday that Steve Sarkisian has accepted the job as head coach at USC. UW is already seeking a replacement. 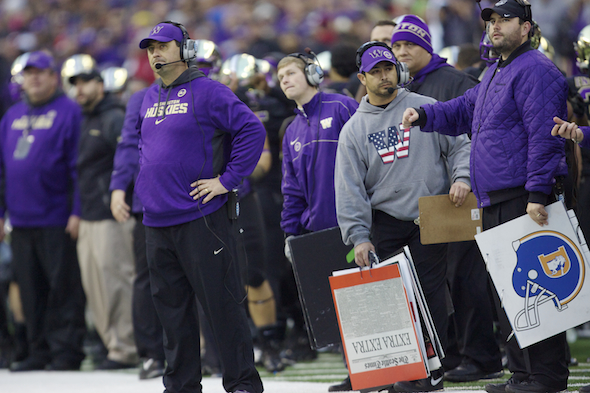 Steve Sarkisian, far left, is shown on the sidelines in his final game as Washington’s head coach, last Friday against Washington State in the Apple Cup. / Drew Sellers, Sportspress Northwest

From the feedback we’ve received, it seems that the University of Washington football fan base is less upset that former head coach Steve Sarkisian has decided to bolt to USC than it is excited — in some cases, agog — about a possible upgrade. News of Sarkisian’s jump to the Southland broke early Monday morning and the Huskies belatedly confirmed it late in the afternoon.

“I want to thank Steve Sarkisian for the past five years of service to our institution,” UW athletic director Scott Woodward said in a statement. “Steve has led the rebuilding of our program to new heights and we are in a much better position than when he arrived. I am happy for Steve and his family as they can return home and I wish them the best of luck in the future.

“The search for Steve’s successor has already begun,” Woodward wrote. “I will work hard in the coming days to find the absolute best fit for the University of Washington but I will not comment on or speculate about the process. We have tremendous tradition, fan base and a world-class institution, and I am confident we will find the right man.

“We will compete for Pac-12 and national championships and we will do so with class, integrity, sportsmanship and a commitment to our student-athletes. That promise is at the forefront of my mind as I embark on finding our next football coach.”

Sarkisian, the first UW coach since Darrell Royal in 1957 to voluntarily leave the position in order to take the head job at another institution (Texas), arrived in Seattle five years ago in the wake of an 0-12 calamity carried out by Tyrone Willingham. Sarkisian was part of — as an assistant, offensive coordinator and assistant head coach — one of the greatest periods in USC history, the Trojans compiling a 74-14 record under Pete Carroll during Sarkisian’s time there.

Although he came to Seattle with no head coaching experience, Sarkisian transformed the woebegone Huskies into a bowl team within two years, one of the highlight moments of his UW career occurring following the 2010 season when the Huskies upset Nebraska 19-7 in the Holiday Bowl.

That same season, Sarkisian’s Huskies traveled to Los Angeles and shocked No. 3 USC in the Coliseum in what proved to be the biggest regular win of Sarkisian’s time at Washington. But for Sarkisian, results did not improve significantly.

The Huskies allowed a school-record 467 points in 2011, including 67 to Baylor and 65 to Stanford, embarrassments that prompted Sarkisian to fire a pack of assistant coaches, including defensive coordinator Nick Holt. The switch to new defensive coordinator Justin Wilcox enabled the Huskies to allow more than 100 fewer points in 2012, but Washington’s record never improved beyond a wheel-spinning seven wins per year.

This year was supposed to be different. The 4-0 start made it look good — Washington was ranked an Associated Press top-15 team for the first time in 11 years. But when it came time to measure the Huskies against the conference’s elite programs, Sarkisian’s Huskies fell short despite Sarkisian’s switch to an up-tempo offense.

Washington lost a winnable game at Stanford (31-28), suffered the annual loss to Oregon (45-24), was blown out by Arizona State (53-24) and lost at UCLA (41-31). Some fans demanded Sarkisian’s scalp after the loss to the Bruins, but most in the media counseled patience, arguing that Sarkisian deserved more time and that a change in head coaches would create too much of a disruption.

The USC job is not one Sarkisian actively pursued, or ever said he wanted, but one he never denied coveting. Fact is, Sarkisian, who began his athletic career not as the BYU quarterback he would become, but as a Trojans baseball player, has been a candidate for the USC job since the day he arrived at Washington to giddy cries of “Bark For Sark!”

It naturally aggrieves Husky fans, especially those with memories of the Don James era, to view the Washington program as a stepping stone. But that’s what it has become, and that’s what it is likely to remain for the forseeable. The other inarguable: the USC job is, has always been, and will always be, better than the Washington job. At least Sarkisian elevated Washington’s status from doormat to stepping stone.

With recruiting season at hand, Washington must act ASAP is naming Sarkisian’s replacement. Every day that goes by without one compromises future seasons. Recruits are making decisions as we write. In addition, Sarkisian’s bolt to USC will certainly factor into, say, Bishop Sankey’s decision to play — or not play — his senior season in 2014.

The easy fix would be Jim L. Mora, head coach at UCLA, who has always considered Washington his dream job, and once was fired by the Atlanta Falcons because he said so on the radio in Seattle.

Washington is no doubt now trying to determine Mora’s interest and availability. Boise State’s Chris Petersen, once a candidate at USC, is also a possibility, but Mora is the more intriguing option. He’s coached successfully in the NFL and demonstrated this year he can do it at the collegiate level.

But speculation on Sarkisian’s replacement is for another day. And before we get too deeply into that, let’s address this: