QB Russell Wilson’s smooth, decisive game on national TV is beginning to create some MVP talk. With a quarter of the season left, what if he’s just warming up? 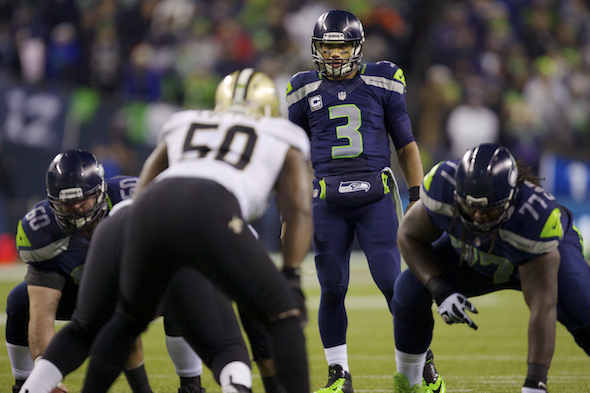 The NFL regular season is three-quarters done. Who is the most valuable player on the best team? The Seahawks crowd Monday night, chanting at ESPN’s post-game interview set on the Clink field, cast its vote, loudly: Russell Wilson. With more games like Monday’s — 310 yards passing, 47 yards rushing, 3 TDs, no turnovers — the chanters may have to be taken seriously.

The nationally televised 34-7 shattering of the the New Orleans Saints had much to recommend to Seahawks fans, not the least of which was the suggestion of another late-season run of domination as a year ago, led by Wilson, whose 108.5 rating is second among regular QBs to the 115.8 of Denver’s Peyton Manning.

Manning remains a clear favorite, but Wilson’s uncanny ability to deliver passes or runs at critical moments is winning him fans on multiple levels.

Imagine if every football coach in America, from pee-wees to pros, had a star player who did this:

“I texted Coach Carroll (Sunday) and I said the way we practiced this week was the best week we’ve ever had,” Wilson said post-game. “That preparation was big. I really think it showed up tonight.”

Guy likes to practice.  He’s winning on the other six days too.

Carroll was amused by the MVP conversation, and predictably dismissive.

“I think what usually happens is the teams that have the most success really kind of attract that kind of attention,” he said on his weekly radio show on ESPN 710. “There’s no question he’s playing that kind of football, and if we can continue to go, then he’ll be in the discussion.

“Really, it’s fun and that’s cool, but that don’t matter. It really doesn’t, and I think Russell would tell you the same thing. If it comes, it comes. But right now he’s just trying to have fun playing football and keep leading this team.”

WR Percy Harvin was held out of Sunday’s game when his hip didn’t respond well enough in practice after 19 plays in the Minnesota game 12 days earlier. That was his first game of the season, and sitting out Monday fueled speculation the remainder of Harvin’s season was in jeopardy.

“There’s no issues, nothing is re-injured or anything like that, just the load just took him a couple weeks to get back from it,” Carroll said. “So he’s feeling really good today and we’ll just take it as we go, one day at a time. He’ll have an easy day (Wednesday) and then we’ll be all the way to Thursday before we really get him going.”

Carroll reiterated the Harvin wants to get back to action.

“There’s nobody that wants to get out there more, and he’ll do everything he can possibly do. He’s done that,” Carroll said. “He’s done a marvelous job of rehabbing to get to this point. It’s been frustrating, but he’s going to pop out now.

“He’s going to pop out of this thing. He’s going to be ready here pretty quick, and we’ll welcome him back when he gets in.”