When the season began, it looked like Sunday’s Seahawks-49ers contest would be for the NFC West ivision title. It still can be, but not in the way most imagined. 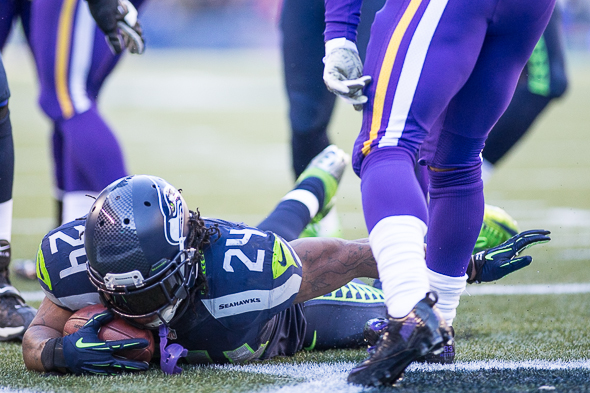 Marshawn Lynch ran for 98 yards and two touchdowns in Seattle’s first meeting with the 49ers this season, a 29-3 victory  at CenturyLink Field. / Drew McKenzie, Sportspress Northwest

When the 2013 NFL schedule came out in April, most thought Sunday’s matchup between the Seahawks and 49ers at Candlestick Park would decide the NFC West championship. It still can — the Seahawks will wrap up the division if they win — but not in the manner originally anticipated. The Seahawks are 11-1, San Francisco 8-4, and the 49ers need a win more than Seattle because they are clinging to the conference’s sixth and final playoff spot by a game.

Part of the perception of San Francisco — not quite as good as last year when the 49ers reached the Super Bowl (lost to Baltimore) — stems from two early-season blowout losses to the Seahawks and Indianapolis Colts and narrow mid-season losses to Carolina and New Orleans by a total of four points. Then there is the fact that San Francisco is 2-4 against teams with winning records.

But the 49ers have won seven games by double digits (Seattle has five), tied with Denver for most in the league, and also have a score to settle with the Seahawks — in fact, two scores. In the past two meetings, the Seahawks have beaten the 49ers by a combined 71-16 (42-13 and 29-3, both wins at CenturyLink Field). On the other hand, the Seahawks have lost four consecutive games at Candlestick by a combined 109-54, although their last defeat, Oct. 18, 2012, was close, 13-6.

Another perception about the 49ers is that quarterback Colin Kaepernick, phenomenal in seven starts late last season, hasn’t improved much in his second year, that he is a one-read quarterback who struggles if forced to stay in the pocket.

Kaepernick has thrown 15 touchdowns against seven interceptions for a passer rating of 88.9 (98.3 last year). But he hasn’t operated with all of his weapons, especially WR Michael Crabtree, out until last week when he made his long-awaited return following Achilles tendon surgery. He had two receptions, one for 60 yards.

“He’s competing like we all are,” San Francisco head coach Jim Harbaugh said of Kaepernick. “I think he’s played very well, and he’s done everything that you want out of a competitor. He’s playing A-plus and competing A-plus, and his strong leadership has been A-plus. Everything has been really good. He’s got a wonderful competitive heart. I just love that about him.”

The key to successfully defending Kaepernick, who makes a ton of plays when things break down and defensive backs have to cover receivers longer than they normally might, is to keep him in the pocket so he can’t slip away and extend plays. When he does, he has formidable weapons in Crabtree, TE Vernon Davis and WR Anquan Boldin, held to one catch for seven yards by Richard Sherman the last time the teams met.

The Seahawks were hoping WR Percy Harvin, still bothered by a hip, go Sunday, but that won’t be the case. Brandon Browner, who returned to practice this week, won’t play, either (the NFL has yet to take action on Browner’s possible one-year suspension). But head coach Pete Carroll liked what he saw in practice out of the rest of his players and does not anticipate any letdown following the 34-7 blowout over the Saints six days ago.

“We had a great week,” Carroll said. “These guys have really put together the kind of week that makes us feel really good about the process. This is an enormous opportunity for us and we’re going to do everything we can to play a great football game. We practiced the way we needed to.

“Even though the week was was short, we made the most of Wednesday and then we came back Thursday and Friday and put together great days — the kind of days we were hoping to put together. You could tell, not just from the spirit of it, but the attention to the details and the guys really on their game plan.”

SERIES: Dates to Sept. 26, 1976, when the 49ers won 37-21 in the Kingdome. Jim Plunkett threw three touchdowns, two to Gene Washington, for the 49ers. Hugh McKinnis scored on two short runs for the Seahawks.The Seahawks have won the past two in the series. Marshawn Lynch ran for two touchdowns and Seattle intercepted Colin Kaepernick three times.

SEAHAWKS HEAD COACH: Pete Carroll (69-55 career, 36-24 Seattle) is in his fourth season. In 2010, he directed Seattle to the NFC West title, the Seahawks becoming the first team in NFL history to win a division with a losing (7-9) record. Prior to joining the Seahawks, Carroll served as head coach at Southern California, where his Trojans won seven Pac-10 titles.

49ERS QUARTERBACKS: Colin Kaepernick has completed 175 of 303 passes (57.8 percent) for 2,312 yards, 15 touchdowns and seven interceptions for a passer rating of 88.9. Kaepernick had his best statistical game in San Francisco’s opener with 412 yards and three touchdowns. In the first meeting with Seattle, he completed 13 of 28 for 127 yards, no TDs and three interceptions.