The University of Washington is expected to announce the hiring of Chris Petersen, who has spent the last eight years at Boise State, as Steve Sarkisian’s replacement. 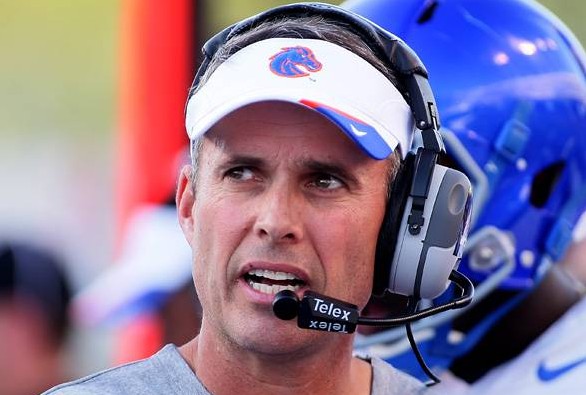 The arrival of Chris Petersen as the University of Washington’s 26th head football coach, confirmed by the school Friday, means the Huskies are replacing Steve Sarkisian with the most experienced and successful individual ever tasked with the assignment. Petersen captured five conference championships and two BCS bowl games at Boise State, where he won 89 percent of his games (92-12) over the past eight years.

The 49-year-old Petersen, winningest active coach in the Football Bowl Subdivision, interviewed with UW athletic director Scott Woodward Thursday in Boise for roughly two hours and agreed to take the UW job, feeling the timing is right for him for professional and family reasons.

“On behalf of the University of Washington and the entire Husky Nation, I am proud to welcome Chris Petersen as our new head football coach,” Woodward said, making the announcement. “Coach Petersen’s success and record are extraordinary, but even more impressive is the man himself. His integrity, work ethic and character make him an outstanding fit and leader of our student-athletes at UW. We are thrilled and proud to call Coach Petersen a Husky.”

According to the Idaho Statesman, Petersen believes Washington is the right fit. Petersen was recently a candidate at USC (withdrew from consideration), where Sarkisian landed, and in previous years was linked to job openings at UCLA and Stanford.

A finalist for the Washington job in 2009 when Sarkisian was hired, Petersen was scheduled to make $2.3 million at Boise State next season, so Washington’s offer of a reported $3.6 million over five years will make him the top-paid coach in the Pac-12 Conference.

Sarkisian was paid $2.9 million 2013, of which $1.5 million must be forfeited for breaching his contract. Petersen is obliged to pay Boise State $750,000, which presumably will be paid by UW.

In the context of UW football history, Petersen’s hiring is unusual in the sense that never have the Huskies hired a head coach with such an extensive record of success. Among post-World War II coaches, Jim Owens (1957-74), Jim Lambright (1993-98) and Sarkisian (2009-12) all became head coaches for the first time when they accepted the Washington job.

A native of Yuba City, CA., Petersen played quarterback at Sacramento City College and UC Davis, where he was named Division II player of the year. He earned a bachelor’s degree in psychology and a master’s in education. He launched his coaching career in 1987 as freshman head coach at UC Davis and in 1989 moved to the University of Pittsburgh as a receivers/quarterbacks coach.

Petersen coached quarterbacks at Portland State from 1993-94, wide receivers at Oregon from 1995-2000 and then moved to Boise State in 2001, becoming offensive coordinator. Petersen was promoted to head coach Dec. 16, 2005.

In 2007, Petersen’s first year as the Broncos’ head coach, he led them to an undefeated (13-0) regular-season record and the school’s first appearance in a BCS bowl game. Boise State upset Big 12 champion Oklahoma in the Fiesta Bowl, 43-42 in overtime.

Petersen distinguished himself for dramatic play-calling at the end of the game, including a 50-yard hook-and-ladder on 4th-and-18 for a tying TD with seven seconds left in regulation; an option pass (off a direct snap to a wide receiver) on 4th-and-2 in OT, and a “Statue of Liberty” misdirection for the two-point conversion to win in overtime.

Boise State went to bowl games every year thereafter until 2013, when the Broncos slipped to 8-4, including a loss to Washington in the season-opening game for both teams. The Broncos also played in the Fiesta Bowl following the 2009 season and three consecutive Las Vegas bowls from 2010-12.

Under Petersen, the Broncos became a consistent presence in the national rankings, in fact the only school ranked in the final poll for the seven consecutive years ending in 2012. In five of those years the Broncos were ranked among the top 10 (2006, 2008, 2009, 2010 and 2011) in the final BCS standings. Boise State ended the 2012 season ranked No. 14 in the USA Today coaches poll and No. 18 in the Associated Press poll.

Petersen is the first and only two-time winner of the Paul “Bear” Bryant Award (2006, 2009) as the nation’s top coach. He also won the Bobby Dodd National Coach of the Year Award in 2010.

It is believed that Washington initially offered the head coaching position to UCLA head coach Jim Mora, a UW graduate who turned down the offer and leveraged it into a new six-year deal with the Bruins.

Three days after Mora rejected Washington, Gary Pinkel, a former UW assistant under James, said he was not interested in leaving nationally ranked Missouri after 13 years.

Alabama offensive coordinator Doug Nussmeier, a quarterbacks coach under Sarkisian from 2009-11, had been scheduled to interview with Washington, but it is not yet clear whether that interview took place.