Most miserable sports city in America? That was then, and the hires of Chris Petersen and Robinson Cano create a new now. 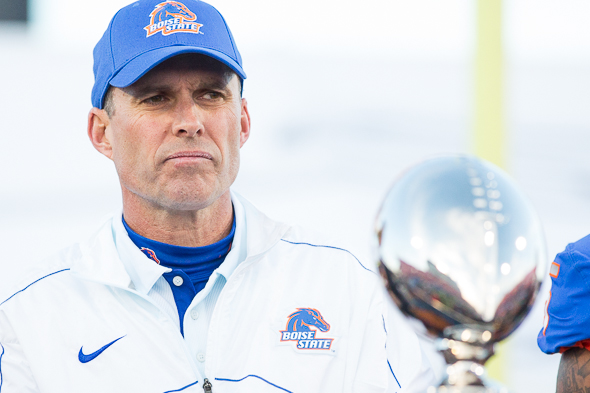 Chris Petersen, with the trophy after beating Washington in the Las Vegas Bowl a year ago, became the trophy for the Huskies Friday. / Drew McKenzie, Sportspress Northwest

To the good people at Forbes magazine who annually rank Seattle as the most miserable sports city in America, here’s a message from the left corner — please insert your rankings in a place where the sun never ventures. Then hide there yourselves.

Should the Seahawks beat the 49ers Sunday in San Francisco, giddiness is forecasted to go from tropical storm to Category 3 hurricane.

Nearly simultaneous news Friday morning of the signing of football coach Chris Petersen by the University of Washington and the presumptive acquisition of free agent Robinson Cano by the Mariners made for one of the most astonishing days in the history of Seattle sports — certainly in the Non-Game Outcome division.

If you’re a Seattle sports fan, you’ve have already been chastened by your non-sports friends to calm down, take a deep breath and chill because nothing has been won yet. To whom you undoubtedly retorted, “You putrid pile of compost! I know that. It’s about what can happen. I know what was — we always suck. These day is about what could be.”

Anticipation is the lifeblood of a sports fan. Event outcomes can turn good or bad, but anticipation, when created, is what sustains from season to season, and from generation to generation. By their annual natures, sports teams are accorded at least modest degrees of optimism by some fans every year.

And as longtime fans know, there is historically no place more anticipation-free in sports than Seattle, where championships come along as frequently as ice ages. The arrivals of major talents such as Petersen and Cano signal that moribund franchises — the Huskies have not been to the Rose Bowl since 2001, the same year the Mariners last made the playoffs — understand clearly that moves must be busted.

The timing is, of course, coincidental. But there is a connection between the moves — TV revenue. Boxcars of it.

Since the 2012 advent of the Pac-12 Networks, the demon spawn of the marriage among ESPN, Fox Sports revenue-starved colleges, each conference school is guaranteed at least $23 million annually, which is a decent upgrade from the $4 million to $10 million the various schools pulled before they conspired to become their own broadcast outlet.

That means funding for entire athletic departments can be removed from the universities’ operating budgets to become self-sustaining, and thus even more independent from the schools than they already were. So the ability of Washington AD Scott Woodward to offer Petersen substantially more than either the $2.3 million annually Petersen was receiving at Boise State, or the $2.9 million that Steve Sarkisian made before decamping to USC, should not be in question. A report Friday afternoon attached an average annual value of $3.6 million.

On top of the TV money, the athletics department is now pulling much greater cash from the gate at renovated Husky Stadium. So, Petersen, make sure to tip your purple cap on game days to the students, who were forced to give up their seats on the 50-yard line and accept the end zone to help pay you.

With the Mariners, the same TV asset prevails. In April, the Mariners purchased from DirecTV the majority interest in Root Sports, the marketplace’s lone regional sports network. The deal put a near-monopoly media operation in the hands of the monopoly MLB operator in a five-state region plus western Canada.

The Mariners and Root steadfastly refuse to disclose the value of the 17-year deal, but Forbes put the total sum at $2 billion. Even if it is half that, the Mariners will generate more than enough money to cover Cano’s reported 10-year, $240 million deal, the third-largest contract in baseball history.

Now on to the key question: Are these deals worth the cost?

Mariners: Yes. In the minds of most of the region’s sports fans, the Mariners have been dead so long that carbon-dating must be used to discover the last time a September game meant something another than another night of garlic fries.

CEO Howard Lincoln had little choice not just to overpay, but over-overpay, Cano. Lincoln’s stewardship has been rife with so many mistakes that he was forced to discard his industrial-strength caution and play the business game of baseball the way the rest of  MLB has to play it — not how a corporate lawyer would play it.

Of course it is ridiculous to commit to paying 10 years from now a 41-year-old second baseman $24 million. But this isn’t about 2024, this is about 2014. Which means that Lincoln cannot stop with Cano. If the Mariners fail to continue to invest in payroll to support Cano in the lineup and on the mound, they truly will be squandering $240 million.

Does this move smack of desperation? Panic? Insanity? Yes. But what else could they have done? The great fear among Mariners fans was that Lincoln was so disconnected from reality, he wouldn’t recognize that recklessness was the absolute minimum requirement.

As Otter said to his frat-house faithful in “Animal House”: “I think that this situation absolutely requires a really futile and stupid gesture be done on somebody’s part!”

Think of Lincoln in a new way: A twin, separated at birth from John Belushi.

Huskies: Yes. The Pac-12 Conference is so big and so wealthy that it will soon be given a seat at the United Nations, a forum used to debating the arms race. Meanwhile, the fight goes on.

The university already mortgaged itself for 30 years to remodel decrepit Husky Stadium, so now is not the time to back off investment in the football program. Jumping off a fast-moving train rarely has a happy end.

Petersen has been asked to dance more than a drunken Kate Upton. Everyone wants him. His record at Boise State, 92-12, looks like a Harlem Globetrotters score. Yes, the caliber of the Broncos’ opponents was weaker. Tell that to Oklahoma in the 2007 Fiesta Bowl, when the plucky Spuds slipped a figurative stiletto into the Sooners, who had to see the blood on their jerseys before they knew they had been stabbed.

A veteran of eight years as a head coach, Petersen, 49, has the maturity and cool that Sarkisian lacked. His national cred figures to hold any wavering UW recruits, and perhaps induce a change of mind in a few others.

Huskies fans need to give a shout-out to Lane Kiffin, the former USC coach whose midseason firing set up the Sarkisian departure, and a second one to Woodward, who was at the right place and right time with the right school, right stadium and right pitch to draw away a coach happy where he was, to something better.

Now all Seattle sports fans need is an agonizing grimace Sunday afternoon from 49ers coach Jim Harbaugh after the “What’s Your Deal? Bowl,” and the storm surge of giddiness figures to fill all the bars in Pioneer Square.