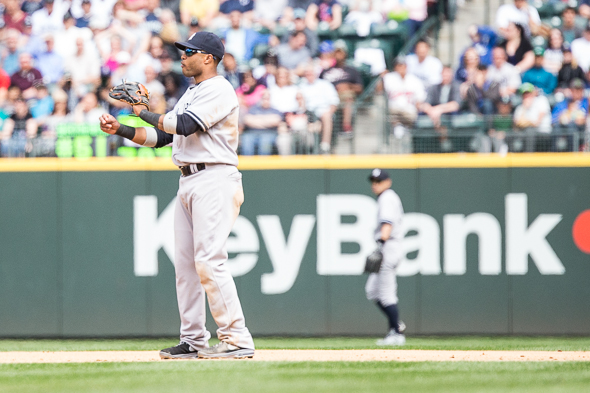 Robinson Cano, ex-Mariner Ichiro in the background, agreed to a 10-year, $240 million contract with the Mariners Friday not long after Chris Petersen agreed to move from Boise State to Washington. / Drew McKenzie, Sportspress Northwest

It’s hard to recall a day in Seattle sports history when two bigger headlines crashed into each other with a bang louder than Friday: “Mariners Agree With Cano For $240 Million,” and “Done Deal: Chris Petersen To Coach Huskies.” What an unprecedented double wow, probably the biggest this market has witnessed.

Irrelevant for so long, the Mariners were essentially forced to award Cano the third-largest contract in baseball history (tied with Albert Pujols) in order to get him to relocate to the Pacific Northwest. The deal speaks to the club’s profound desperation, must have made Howard Lincoln gag on the 10-year commitment, and represents a shift in emphasis.

For two years the Mariners have preached patience as they developed their young ball club. The Cano move says patience has gone the way of Eric Wedge, as it must be. Time to make a splash now.

Ten years and $240 million for Cano is a magnum overpay. The second half of the contract, when Cano plays his age 36-40 seasons, could become a haunt job of the first order. But the Mariners had to do it because they had run out of options: Attendance at Safeco Field sagged to 1.7 million last season (from a high of 3.5 million in 2002) and the Mariners are now the No. 3 ticket in their own neighborhood behind the Seahawks and Sounders. No wonder they don’t want the competition from pro basketball and hockey.

Cano can’t carry a club himself any more than Ichiro could in his prime, so the Mariners are not likely done spending. In fact, if the Mariners do not make the most of the front end of Cano’s contract by substantially spending on more talent, especially offensive talent, signing Cano will become a huge mistake.

The hot talk is that the Mariners might trade promising pitching prospect Taijuan Walker as part of a package to import free agent pitcher David Price from Tampa to a rotation anchored by Felix Hernandez and Hisashi Iwakuma. Part of that package could include second baseman Nick Franklin, who just lost his job. Dustin Ackley is also in play, and everyone else should be. Even with Cano, the Mariners are a long way from competing with the Athletics, Rangers and Angels.

The Cano signing should not be viewed as adding a piece as much as it should be seen as sending all the dominoes on the board tumbling. That’s why his acquisition is going to be among the most significant in franchise history.

Chris Petersen, perhaps the most notable man to walk the streets of Yuba City, CA., provides the Huskies the opportunity to finally get it right after five years of Steve Sarkisian, always an interim head coach until the USC job opened up; four years of Tyrone Willingham, a hire worthy of Lincoln and Chuck Armstrong; two-year stop-gap Keith Gilbertson; and four years of Rick Neuheisel, a victory of telegenics over substance.

Petersen gives the Huskies their first opportunity to become a BCS-caliber team since Don James departed in 1992. He won big at Boise State, twice produced BCS teams, and should not have difficulty taking the program to a higher level than Sarkisian, a good recruiter who too often messed up while wearing the headsets on game days.

So, to the point: