Yankees tried to deal Robinson Cano three times before he reached the major leagues. Now he’s one of the best in the game. 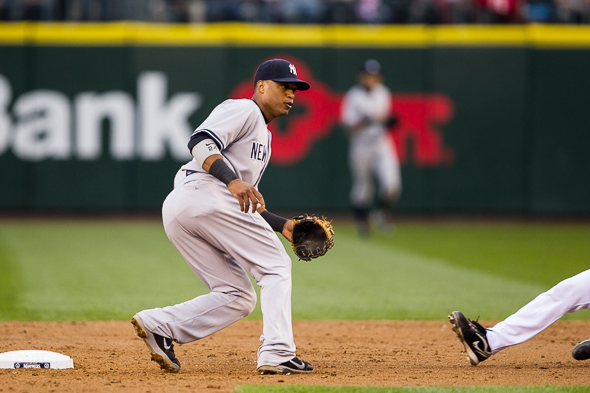 Robinson Cano has a close relationship with his father. The pair train together in the off-season. / Drew McKenzie, Sportspress Northwest

Growing up in San Pedro De Macoris in the Dominican Republic, Robinson Cano was never dubbed a “five-tool” player, never offered million-dollar signing bonuses by an MLB scout. Cano’s father, Jose, negotiated his son’s first contract with the Yankees in 2001 for $150,000.

Cano was a .278 career hitter in the minor leagues. Never considered an elite talent, he was too slow, scouts said, and lollygagged on the basepaths. His plate discipline was shoddy. At best, Cano looked an adequate — nothing more — complementary piece down the road in the Yankees’ stacked lineup.

New York tried and failed to trade him on three occasions while he gradually worked his way through its farm system.

Tom Verducci lays out the career arc in a 2010 Sports Illustrated profile chronicling Cano’s rise to an MLB All-Star, to the game’s premier second baseman who next season will be a 10-year veteran.

In the field, Cano is so relaxed it looks as though he might doze off while taking a ground ball. Rather than throwing overhand, as Abner Doubleday surely intended, Cano typically opts for a submarine style toss to first base. Everything about his game is smooth until his bat hits ball.

Named after Jackie Robinson, Cano, 31, is a five-time winner of the Silver Slugger, the award given to the league’s best offensive player at each position.

Verducci described Cano as a free swinger in the minor leagues. He regularly went after  “pitcher’s pitches” — fastballs high and away, curveballs down and in — but still drove them into gaps, sometimes out of the yard.

That changed in 2010, Verducci wrote, after Cano went to the Dominican Republic to work on plate discipline. In spring training, Yankees hitting coach Kevin Long didn’t allow Cano to swing at the first pitch. Cano responded by posting a .381 OBP, a career-best.

Despite playing his career in New York, a city where media scrutiny sent Randy Johnson to YouTube infamy within a few hours of his arrival after a trade, Cano is in some ways still a mystery away from the field.

He remains close with his father. The elder Cano started three games as a pitcher for the Houston Astros in 1989 but never stuck around in the big leagues. In 2011, the duo breathed a little sentimentality into the All-Star Game home run contest by teaming up as a pitcher-hitter combination.

“The best thing wasn’t my swing,” Cano said afterward. “It was the kind of man who was throwing — my dad. He knows me really well.”

During off-seasons, the pair train together at a rocky, discolored field in the Dominican Republic. Players are as likely to encounter goats as field ground balls. The setting provides a getaway from the big city.

Cano’s career hasn’t been without controversy.

He is embroiled in an ugly child support dispute with a former girlfriend in the Dominican Republic.

Cano likes to have a good time, which may partly explain his decision to choose to represent him rapper Jay-Z and his firm, Roc Nation, alongside Creative Artists Agency. Jay-Z gave Cano a $34,000 watch in October as a birthday gift, which led to a subsequent investigation from Major League Baseball after Cano switched from super-agent Scott Boras to the entertainment mogul.

It got real in Jay-Z’s latest album when Mr. Beyonce Knowles called out Boras.

When the report from ESPN leaked Monday that Cano was negotiating with Seattle for 10 years and $240 million, it boosted Jay-Z’s cred as an agent. Cano was already one of baseball’s best.