The transition to MLS and a new team, plus national-team demands, wore him down, Dempsey said. He hasn’t decided whether to go on loan to the EPL. 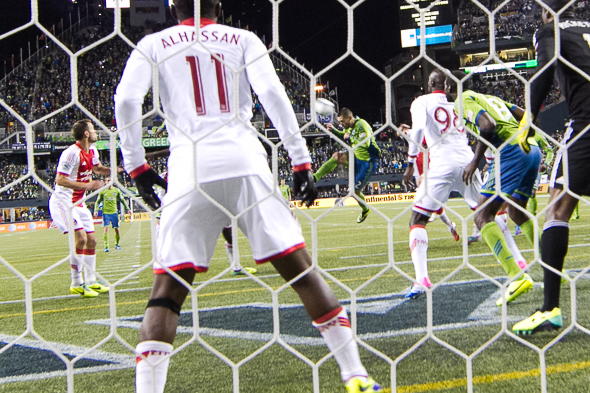 Clint Dempsey admitted he was worn down by the time the Sounders season ended against Portland. / Drew Sellers, Sportspress Northwest

Clint Dempsey admitted Friday he wore down upon his return to MLS with the Sounders, a problem that was by compounded by U.S. Men’s National Team demands. Talking to ESPN and reporters at the World Cup draw party at Kansas City’s Sporting Park, he said he was working on conditioning and has yet to make a decision about playing in the EPL.

“I’m working in the gym trying to make sure that my body is right, so that I’m not going to be breaking down,” he said. “I’ve just to do a better job of being smart about not pushing myself too hard.

“I think that’s kind of been happening, because I got a late start coming into the league, not having a preseason, trying to play catch-up with everybody else and getting used to all the travel, getting used to playing on turf. I think just kind of took a toll on me, kind of wore me out. I kind of felt I was always playing catch-up, and just couldn’t get a good run of games.”

Responding to reports that he was being pursued by at least four English teams, he told ESPN that he may have news in a week about his offseason and whether he will offer himself for a short-term loan.

But since next season also includes World Cup play in Brazil, Dempsey’s report on his physical condition suggests he might skip the EPL to focus on the MLS season and his responsibilities as USMNT captain.

“I feel good,” he said. “It’s been frustrating having some of the injuries I’ve had.”

He listed his injuries: A hamstring pull, a shoulder sprain, and a calf strain. A target of physical defense, he was not nearly the force the Sounders hoped when he was signed at midseason to much fanfare. The Sounders lost nine of their final 10 games, including two to Portland in the Western Conference semifinals.

He played 12 games for Seattle, registering only one goal and one assist.

Some think that playing in the EPL will sharpen his edge against better competition, but Demspey has to decide if rest is better. He wouldn’t say whether hewould play in the annual USMNT January camp, but wants to be ready for Sounders workouts in February, then start looking ahead to Brazil, although his spot is not guaranteed.

“I’ll make sure I’ll be more settled next season,” he said. “The season starts up in March and then I think I’m meeting up with the national team in May, so hopefully I’m fit, hopefully I’m playing well get selected and part of that team that’s going to the World Cup.”