Thiel: Is there a bottom to Mariners’ free-fall?

Disclosures of Mariners’ management dysfunctions are the newest, not the first. Baseball knows; Wedge probably felt emboldened to be honest. 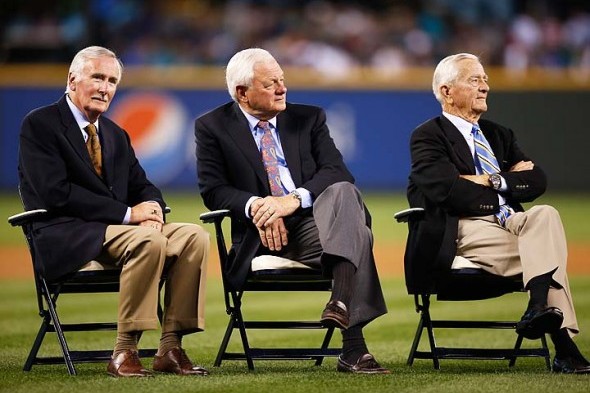 Howard Lincoln, left, Chuck Armstrong and John Ellis, at the Aug. 10 induction of Ken Griffey Jr. into the Hall of Fame. / Wiki Commons

“Somebody has got to stand up to them.”

Wedge was so upset with his treatment, and the dysfunctional operations of the club, that he potentially risked much of his MLB future by doing something few ex-employees do: He went on the record with his version of the truth.

In baseball, as with most industries with few job openings and many applicants, people with knowledge of in-house controversy usually stay mum, or go off the record, for the obvious reason: Public candor can make them radioactive to future employers.

But off-the-record sources are often greeted with skepticism, and can be deflected away by the subjects of the accusations.

The quotes and anecdotes they recounted paint the Mariners execs as fools and bullies unqualified for their positions. The easy counter-argument is that these whistle-blowers are bitter, disgruntled ex-employees filled with sour grapes. But the counter to that is what was written above: They also want to remain a part of MLB, so are taking risks with their livelihoods in order to tell their version of the truth.

Why would they be so blunt in their condemnations?

Having spoken to none of them about the story, nor Baker, I can’t say exactly. But I am going to hazard a guess:

They are not saying anything the rest of baseball doesn’t already know.

Lincoln has been in charge of the Mariners since 1999, and Armstrong’s tenure goes back to the grim days of the George Argyros ownership in the 1980s. The Mariners love to brag about how well-connected is Armstrong. But that also means baseball people know most everything about the club’s business, because frankly, Armstrong can’t keep his mouth shut, especially when he feels compelled to defend his tenure.

And defend he must, because the Mariners are one of two MLB teams never to have made the World Series in an era of institutionalized parity. Further, they have had eight losing seasons in the past 10 and have lost about 50 percent of the club’s fan base in the past decade.

The Mariners are one of the great messes in sports, for which the latest evidence is the free agent offer of $240 million for 10 years for second baseman Robinson Cano. As much as it is welcomed for its break from the Mariners’ woebegone past and is at least some kind of commitment to winning, the gesture is like giving an eight-year-old the keys to a Maserati.

Armstrong, who retires Jan. 31, perpetually assumes the “not my fault” posture when called upon over the years to explain the Mariners’ blunderings. But pointing the finger up to Lincoln isn’t exclusive to Armstrong. The gesture comes  from scouts, executives, players and others who have had long-term dealings with Lincoln.

The laments are heard regularly by many members of the media as well as longtime season-ticket holders. But anytime the disputes are not about game outcomes and involve personnel and decision-making, the pursuit of truth devolves into a did-too, did-not argument that, unless it goes to court, rarely produces heat to go with the light.

The employer-employee fight is seen poorly through keyholes.

Until someone is willing to put a name to public criticisms, the value is lessened. What Wedge, Blengino, Fusco and Guerrero did was to say the Mariners executives’ conduct can no longer go on without account. The ex-employees too, had to be accountable, and now are.

But they weren’t the first. For my 2003 book, “Out of Left Field,” Lou Piniella talked to me after he left the Mariners to manage in his hometown of Tampa. At his request, the Mariners traded Piniella, as it turned out, for an outfielder, Randy Wynn, something Piniella noted with wry irony, was a position he was trying to get the club to fill for him for a long while.

But in his final season, he ended up in a shouting match with Lincoln in his office over remarks Piniella made in the media about the type of players the Mariners needed to contend. It violated a one-voice rule Lincoln implemented, seeking to have then-GM Pat Gillick speak for the club. Because he was the boss, Lincoln won the argument. But it helped lose Piniella.

“I like Howard personally,” said Piniella. “I enjoyed working with him. He’s a bright guy, a charming guy. But I’ll tell you this — he’s bottom-line. Howard likes total, total control.

That was 11 years ago. Remarkably, nothing has changed. When you read Baker’s story, keep in mind Piniella’s words — Lincoln wants total control, and he doesn’t know how to win.

Now, with Armstrong’s departure, it falls to Zduriencik to defend Lincoln when everyone in baseball knows more of the truth. Presumably, he must also explain to applicants to succeed Armstrong these complaints are from vengeful ex-employees. Good luck with that.

Sadly, the criticisms are not new, only the latest. They are shared by numerous current and former employees. Few have the clout of former managers.

One remark in Baker’s story resonated with me.

“Howard would run things through Chuck and Jack all the time,” Wedge said, referring to orders from Lincoln, who has no baseball background, on how to stop the losing. “If I did what they wanted, it would be a joke of an organization.”

Too late, Wedge. Too late.

Despite the latest revelations of this beleaguered franchise, the joke apparently will go on. Whenever Lincoln is criticized, he digs in harder, so convinced is he of his righteousness. But just last week he threw out all of his business principles to make the Cano deal. Who knows what may come?

Lincoln could stubbornly carry on in this climate — baseball has had many misbegotten ownerships, including the Yankees and Dodgers. The minority owners, led by John Stanton, could ask for change. The three-person board of directors of Nintendo of America that owns 55 percent of the club  — Lincoln is one of the three — could vote to sell.

I have no idea. Never would I have imagined all the parties with a stake in the Mariners would allow the franchise this get this bad. Just please don’t try to convince me this is the bottom, because I thought that three bottoms ago.