Nine penalties cost the Seahawks 85 yards, and perhaps the chance to wrap up the NFC West in Sunday’s 19-17 loss to the Niners. 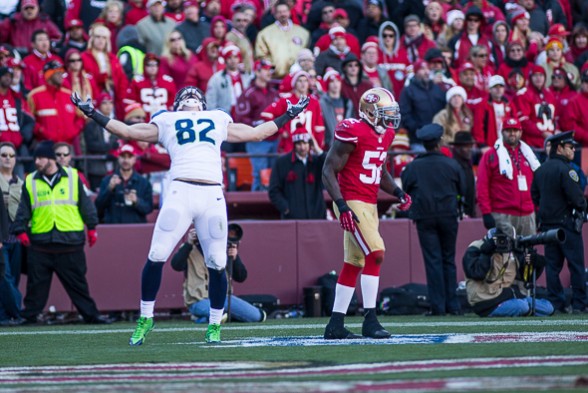 With three catches for 70 yards, including a 39-yard TD, TE Luke Willson had his best game as a Seahawk. / Drew McKenzie, Sportspress Northwest

The Seahawks should throw a parade when Candlestick Park is demolished in 2014.

Seattle hasn’t won in San Francisco since Oct. 26 2008, a losing streak that reached five Sunday when the Seahawks fell 19-17 to the rival 49ers. The loss halted the Seahawks’ five-game road winning streak, delayed the NFC West title clinch, a first-round bye and kept them from closing in on home-field advantage in the playoffs.

Seattle mustered only 264 yards of total offense and 13 first downs. Per ESPN Stats and Information, QB Russell Wilson completed just two of the eight passes he aimed more than 10 yards downfield, finishing a pedestrian 15 of 25 for 199 yards, one touchdown and one interception. His longest pass came near the end of the first half when he found backup TE Luke Willson across the middle for a 39-yard score. 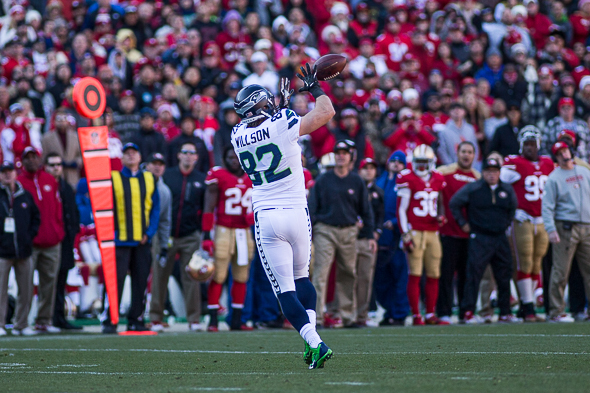 Willson alleviated preseason concerns that the Seahawks were thin at TE by having a solid rookie campaign. / Drew McKenzie

Wilson lamented the penalties afterward, telling reporters, “We should have won it. The penalties really hurt us offensively and got us off schedule. We play so physical that sometimes those calls are going to go against us. But we have to eliminate that.” Officials flagged the Seahawks nine times for 85 yards. 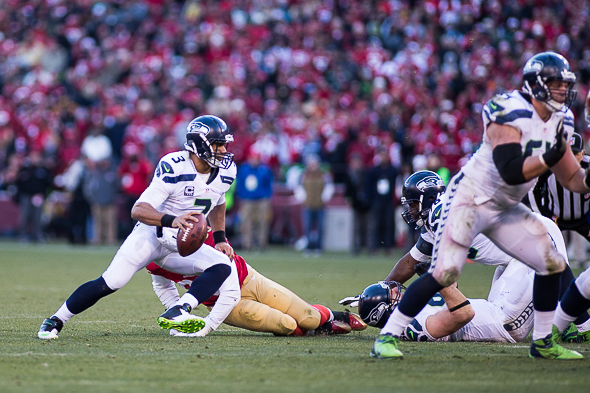 With the loss, Wilson’s MVP chances took a hit, but he still is completing 64.5 percent of his passes and has 23 TDs and 7 INTs. / Drew McKenzie

Rarely in the return to his Bay Area home did Seahawks RB Marshawn Lynch get far before contact against the Niners. Lynch was steady but unspectacular Sunday, rushing 20 times for 72 yards and a score. Per custom, he didn’t speak with reporters in the locker room, though “Mama Lynch” had a few things to say in the week leading up to the game. 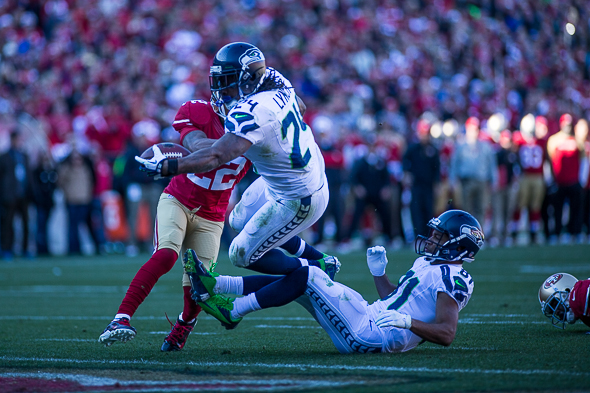 Afterward, Niners coach Jim Harbaugh compared the win to going to the dentist for a root canal (He must not floss). Chippy and physical, even for NFL standards, the win pushed San Francisco to 9-4 and a game closer to securing a spot in the wild card round of the playoffs. The win also confirmed that Seattle is going to have to rip the NFC West from the Niners clenched, cold hands. 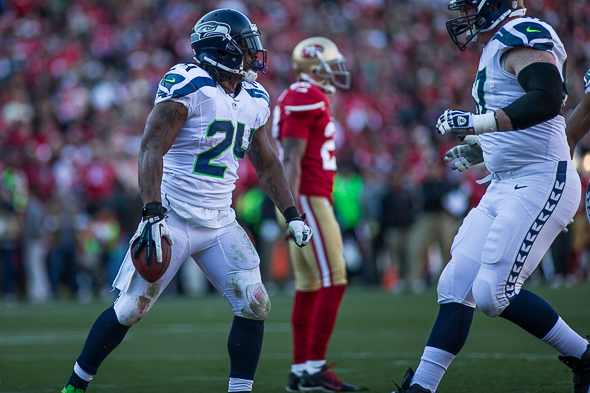