The late gash by 49ers Frank Gore was an example of small things in a close game that become difference-makers. Seahawks should have stopped it, Carroll said. 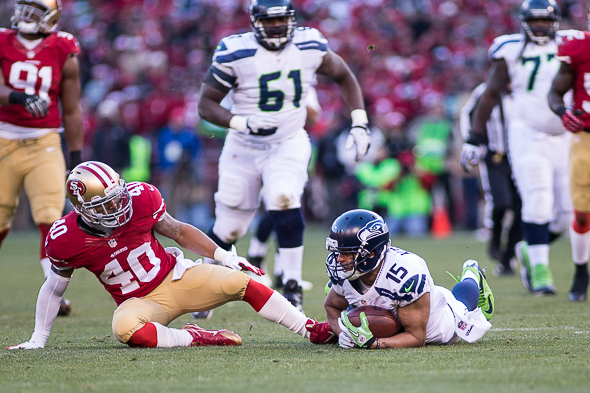 The Seahawks didn’t take much advantage of wide receivers such as Jermaine Kearse going deep; Russell Wilson was 0-for-3 on deep throws, and Kearse had two catches for 15 yards. / Drew McKenzie, Sportspress Northwest

Ever in pursuit of the silver lining, coach Pete Carroll Monday was ready to embrace the notion that the Seahawks’ loss in San Francisco Sunday was useful, at least in terms of dope-slapping any smugness from the Seahawks that may have developed in the 11-1 start.

“I don’t think there’s any question — it can help if you utilize it,” he said Monday. “It’s a learning opportunity again, a reality check — how the littlest of things can determine the outcome of a game.

“I like (other teams) to learn the hard way, as always, but that’s not the case.”

One of the little things turned large — a sweep left by the 49ers RB Frank Gore late in the game that Carroll said the Seahawks stopped earlier. Behind a pulling guard, Gore broke through the line and cut right, past several defenders with a shot at him.

It went for 51 yards, longest run of the season against Seattle by 19 yards. Noteworthy was Earl Thomas, perhaps the Seahawks best defender, getting caught flat-footed as Gore whooshed past.

“We just over-ran it,” Carroll said. “A number of guys had a chance. Kam (Chancellor) had a real shot at it, just floated over the top of the run. Earl had a shot at it as it came back underneath. It got back all the way to (Richard Sherman). He got nicked by a blocker and just didn’t get off of it cleanly and (Gore) took off and hit it. We were going this way and he was going that way.

“They blocked it well up front. But we had plenty of shots to keep it to being an eight-to-nine yard gain. They took full advantage of it.”

Any improvement on the defensive front seven will have to happen without starting WLB K.J. Wright, who is scheduled to have surgery Tuesday to repair a bone broken his right foot. He’s likely to be out six weeks.

His place will be taken by Malcolm Smith, a third-year pro who had 55 snaps Sunday and made three tackles.

“He understands the (weakside linebacker) position really well — it’s his natural position,” he said. “He’s a fantastic athlete, really good coverage/speed guy on the field. He’s played quite a bit for us this year. We’re comfortable with him playing and he should do a good job for us.”

Carroll seemed to think the other significant injury from San Francisco, a pectoral strain by C Max Unger, may heal in time for the Giants game in New York Sunday: “He’ll be in limited fashion during the week. We think we’ll get him for the ball game.”

Carroll continued to lament penalties — the nine Sunday (for 85 yards) brought the season total to 104, two less than NFL leader Tampa, which also has a slim lead in yardage, 1,000 to 976.

“In terms of where I would be criticizing the officials, I don’t see it as that, but penalties really were a big factor in the game,” he said, noting that on three of nine possessions, the Seahawks had three first downs called back by major penalties. “Those drives got wasted. We didn’t overcome them.

“I don’t think they were necessarily poor calls; we’re just looking for consistency at all times.”

On San Francisco’s final possession, Carroll gave some serious consideration to letting the 49ers score shortly after Gore’s run in order to give the Seahawks offense a chance with the ball. They didn’t, the Niners kicked the game-winning field goal and the ball back to the Seahawks, out of time outs, with 20 seconds left.

“We don’t have examples in our (coaches’) history or in our backgrounds” to claim the rare strategy was worth trying, he said.  “But we do know that’s an alternative. I remember it’s happened before. I was clear about it, (but) decided to go see if we can knock the (field goal attempt) down. Just stay with the principles of doing it on defense.

“But when we have a guy like Russell (Wilson) and our offense, they can hit it in two minutes. We’re really good at it; it does give us that option.”