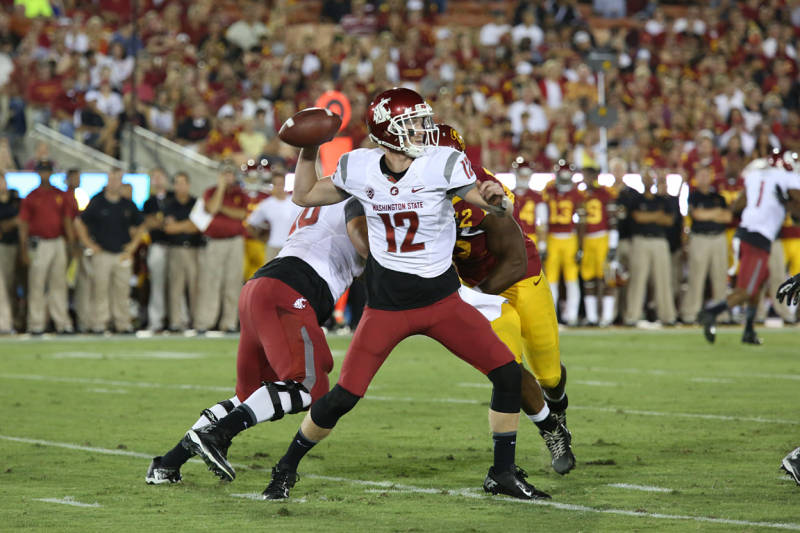 ALBUQUERQUE, N.M. – Joe Theismann is 64 years old and long removed from his football glory days, but the former Notre Dame and Washington Redskins star sounded like he was ready to put on pads when he delivered a stirring speech Friday afternoon at the New Mexico Bowl luncheon.

A sold-out crowd of 700 accorded Theismann a standing ovation when he finished a stirring speech that mixed humorous anecdotes with inspirational tales aimed at the Washington State and Colorado State players in attendance.

“The Gildan New Mexico Bowl is the first bowl (of the season),” Theismann said. “It’s like your first kiss. I know you’re laughing, because some of you remember it.

“It’s that first moment you have when you experience something very new. That’s what’s in store for you.

“Cherish the moment,” Theismann told the players. “I still have my Cotton Bowl watch when I played in 1970. I still remember sitting on the bus and driving up to the monastery, where they stuck us in the middle of nowhere, to prepare us for the game.”

Theismann, a standout quarterback, said he “started to believe all the headlines” about himself before his life changed when he suffered a career-ending broken leg in 1985. The gruesome injury drew national attention when it was replayed over and over again – with a bone sticking out of his lower right leg – on “Monday Night Football.”

Theismann said he was humbled when his playing career came to an end. He said his ego was checked again a few years ago when he asked a young server to do him a favor at a banquet where he served as the keynote speaker.

“I asked for an extra tab of butter,” Theismann recalled. “He says, ‘No.’ I said, ‘Whoa. Time out. I am Joe Theismann. Do you know how many people remember me? I would like another tab of butter.’

“It brought me down to earth.”

Theismann told the story to emphasize the need for players to appreciate teammates and others who contribute to a team’s success. Theismann has long worked as an NFL television broadcaster, but he still cherishes his college days.

“I can reel off the players that I shared the experience of college with more than I can the men I won a world championship with,” Theismann said.

Theismann, still fiercely loyal to the Redskins, could not resist getting in a dig at the arch-rival Dallas Cowboys when he mentioned the Redskins logo.

“Not some cute shiny little star that some people wear on their helmets,” Theismann said sarcastically.

He then went in for the kill.

‘I feel obliged to ask this question at this point: Are there any Cowboys fans here?”

SERIES: The New Mexico Bowl marks the first meeting between Washington State and Colorado State (7-6) of the Mountain West Conference.

WSU HEAD COACH Mike Leach (92-56 overall, 9-15 WSU): Hired Nov. 30, 2011 to replace Paul Wulff, who went 9-40 in four seasons, Leach’s 2012 Cougars led the Pac-12 in passing at 330.4 yards per game and finished the season by beating Washington in the Apple Cup. In 10 seasons at Texas Tech (2000-09), Leach earned 10 bowl bids. The Susanville, CA., native, who was raised in Cody, WY., recorded a school-record 84 victories. Leach’s offenses led the nation in passing six times and three times accumulated the most total yards. In 2009, the Red Raiders finished second in passing offense and fourth in total offense, both marks tops among BCS conference schools. Prior to Texas Tech, Leach spent one season as the offensive coordinator at Oklahoma (1999). That year, the Sooners set six Big 12 and 17 school records.