Forced into two linebacker spots because of injuries and suspensions, Malcolm Smith, a USC grad, has impressed Pete Carroll. 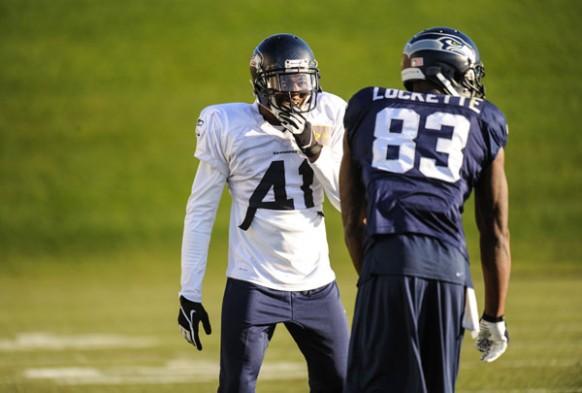 In his third year out of Clemson, Seahawks CB Byron Maxwell has 24 tackles, a forced fumble and an interception. / Seahawks.com

RENTON — With LB K.J. Wright missing the next six weeks following surgery Wednesday to repair a fractured foot bone, the Seahawks could finish the regular season with at least three starters missing from their defense.

Wednesday Carroll evenly spread the praise for Maxwell and Lane.

“I really have loved the way they’ve played. I thought they’ve done great for us,” Carroll said. “Our expectations were that they could play and that they’d hold up their end of it. They were both very productive. The ball is going away from (Richard Sherman) a little bit, so they’re getting some extra turns.”

If the San Francisco game provides the Giants offense a blueprint, it might avoid testing Sherman and S Earl Thomas Sunday in MetLife Stadium (10 a.m., FOX). New York QB Eli Manning is tied with Geno Smith for a league-worst 20 interceptions, and Seattle leads the league in pass defense (175.6 yards per game).

Wednesday Thomas said the Niners stayed out of “Area 29” so that QB Colin Kaepernick could attempt to exploit Maxwell and Lane.

Kaepernick went 15 of 29 for 175 yards and a touchdown. Midway through the third quarter, leading 16-14, he tried to find WR Michael Crabtree for a deep, back-shoulder completion as Crabtree approached the end zone. Maxwell jumped the route and made his first interception of the year at Seattle’s one-yard line.

“Everybody saw they played great,” Thomas said of Maxwell and Lane. “They had a great impact on the game. Maxwell had a great interception that changed the momentum. (Jeremy Lane) did a great job at the nickel.”

Thurmond has served half of his four-game suspension after testing positive for a small amount of marijuana in late November. Browner is out with a groin injury for at least another week, Carroll said, and the league hasn’t provided him an update on Browner’s appeal of a year-long ban after he allegedly tested positive for marijuana.

In other words, get used to seeing a lot of Maxwell and Lane.

“I think it’s really part of the system that these guys have been with us long enough that they’re really our guys and play with the style and the mentality that we want. It’s a really good sign of the depth in our program,” Carroll said.

Maxwell’s explanation for making a seamless transition into Browner’s role?

“It says we have great coaches. It’s just one of those things where we have great chemistry with teammates so it helps when you’re in there,” he said. “It’s been three years so that’s going to happen. We have a mindset.

“At the end of the day we focus on us, basically.”

After Wright came out of the game Sunday, versatile linebacker Malcolm Smith took over and provided run support and blitzes at his natural “Will,” or weakside spot. Smith finished with four tackles in limited action, including one for a loss.

A seventh-round pick in the 2011 NFL draft after playing for Carroll at USC, Smith said he’s been running the same scheme for the past seven years, which lessened the learning curve when he filled in for a suspended Bruce Irvin earlier in the year, and for Wright last week.

“I don’t know if he’s exceeded the expectations of a seventh-round pick but we certainly have seen him rise up and be a crucial member of our football team for quite a while now,” Carroll said. “When he steps in, it doesn’t affect our thinking in any way. He can do everything we want him to do.”

Still no Harvin; Unger on the mend

Seattle’s priciest off-season acquisition ran and rehabbed but didn’t practice and might not play against the Giants. Harvin caught one pass for 17 yards in his only appearance Nov. 17 against the Vikings before re-aggravating his surgically repaired hip. He hasn’t appeared in a game since.

“It’s week-to-week and we’re trying to figure this thing out. When he gets on the practice field it’s truly day-to-day and we’ll see how he responds,” Carroll said. “We have to see if he can tolerate, and come on back, and give us a couple days of work.

“We’ll have to make sure that he’s right, so we’re going to take our time. It seems like: ‘How can you take your time this close to the end of the season?’ But we still have to do that to take care of him.”

C Max Unger participated a walk-through but didn’t practice while he recovers from a strained pectoral muscle that knocked him out of the Niners game. Carroll said he expects Unger to play Sunday against the Giants.