Once a designated player for the Seattle Sounders, midfielder Mauro Rosales went to Chivas USA in a trade Wednesday due in part to the salary cap. 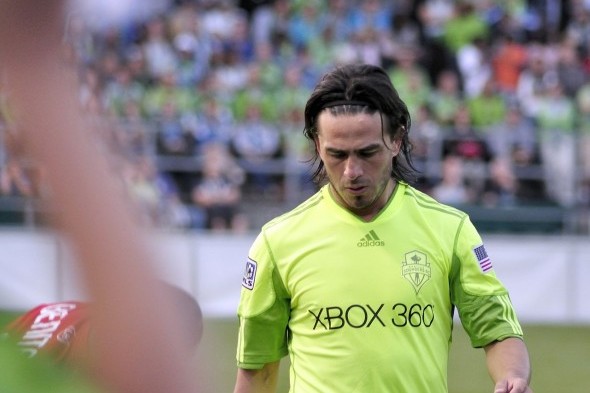 The Sounders Wednesday continued their off-season remake by trading popular midfielder Mauro Rosales to Chivas USA in exchange for the rights to forward Tristan Bowen and Chivas’ No. 2 allocation ranking. Chivas will receive Seattle’s No. 13 allocation ranking. The trade of ther 32-year-old Rosales, who had 34 assists during his three-year Seattle career, was a salary-cap move.

“Mauro has been an important part of our organization, both on and off the field, for the past three years,” said part-owner and general manager Adrian Hanauer. “It will be difficult to see him leave, but our salary-cap situation made this decision necessary. We wish Mauro the very best at Chivas.”

Rosales holds the club record with 17 game-winning assists across all competitions.

Rosales led the Sounders with eight assists and 33 appearances in 2013, adding four goals. He finished tied for first in MLS with five game-winning assists, matching his club record from 2011 and 2012. The Sounders posted a 24-2-8 all-time record when Rosales registered a goal (12) or an assist (34).

Rosales was signed March 18, 2011, and re-signed as a designated player Dec. 13, 2011. In each of his first two seasons, Rosales set the club record with 13 assists, scoring a career-high five goals in 2011 while earning MLS Newcomer of the Year honors. He has made the seventh-most league appearances (86) in club history and, overall, has scored 12 goals with 37 assists in 101 appearances across all competitions.

A native of Los Angeles, Bowen was the first player to come out of the LA Galaxy youth academy system to sign with the first team Nov. 12, 2008. Bowen also played for the U.S. under-18 and under-20 national teams.