The Giants area great example of the rise and fall of NFL teams. Over the past seven years, they have won the Super Bowl twice and missed the playoffs four times. 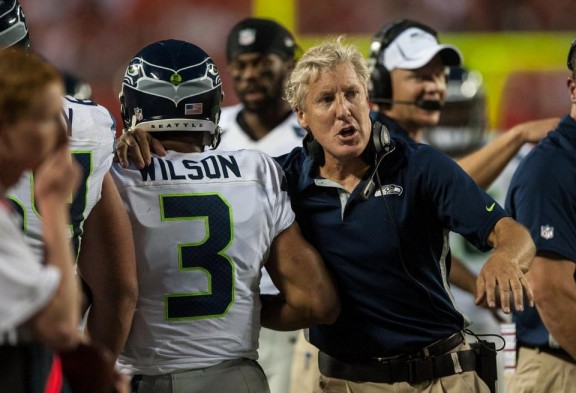 A good coach and a good quarterback, and the relationship between them, is the biggest asset in sustaining NFL success. / Drew McKenzie, Sportspress Northwest

As orderly and militaristic as the NFL prefers to be, seasonal outcomes tend to be as random as puppies in a pillowcase. No better example exists than the New York Schizo-Giants, who host the Seahawks Sunday in ice-encrusted New Jersey.

Forecast by some in the preseason as a wild-card playoff team, the Giants started the season 0-6, won four in a row, then Sunday were down 24-0 at the half in San Diego and fell 37-14, falling to 5-8 and out of the playoff race.

But the bigger picture is more startling: Counting 2013, the Giants over the past seven years have won the Super Bowl twice and missed the playoffs four times.

Giants fans are faced regularly with a choice: Embrace or strangle, often in the same season.

The narrative arc is a worthy study for Seahawks fans who are enjoying the best season in club history. The delirium can obscure the view that cliff’s edge is near every footfall. Just one tackle of Frank Gore Sunday in San Francisco, and the Seahawks were in plain view of an upset of the 49ers.

“The thing of it is, our league is such that it’s set up that way — whoever is first is last,” Tom Coughlin, Giants coach in his 10th season, said Wednesday by teleconference. “In our business, you do have to understand that, and also the fact that anyone is capable of beating the other team on any given weekend.

“The team that gets on the roll, right at the end of the year, has the capability of winning out and winning the Super Bowl. With free agency and cap room and solid drafting, a team can move forward in a relatively short amount of time. Teams that can get hot at the right time end up being the champion.”

No better example is available than Coughlin’s 2007 Giants, who lost two of their last three regular season games to drop to 10-6 and eke into the playoffs as a wild card. From there, the Giants beat Tampa, Dallas and Green Bay, all on the road, then triumphed 14-6 over New England in the Super Bowl. The run remains one of the great feats in NFL playoff history.

Seasonal success, and sustained success year after year, is more precarious in pro football than in any sport. So few games, so many injuries, so little difference between good and bad.

“It doesn’t take much,” said Eli Manning, who came to the Giants with Coughin in 2004 and have made resilient tandem. “A few injuries here and there, or just not catching some breaks, and things can definitely turn on you quickly in this league.

“You have to be playing at a high level and find ways to win those close games. That can be the difference. Making plays at crucial times in games that can lead to victories, or if you don’t make them and make mistakes, they can lead to losses. Some years, you find a way to make all the right plays at the right time. Then some years it kind of works against you.”

The New England Patriots have come closest to sustaining excellence in the NFL. Coach Bill Belichick is 169-57 and 17-7 in playoffs during his 13 years in Boston, also coinciding with Tom Brady’s tenure at quarterback. His three Super Bowl wins are one more than Coughlin and three more than Carroll, whose team is still the betting favorite to return to MetLife Stadium in seven weeks.

Just as it has been with the Giants and Patriots, maintaining the relationship between Carroll and quarterback Russell Wilson will be the axis upon which the Seahawks world turns.

“It’s very difficult to play at that high level, and then come back and do it again,” Carroll said. “To continue the sense that it takes, the urgency, and all the factors that make you a championship team — it’s hard to do that again. There’s issues of the hype and the buildup, getting patted on the back . . . There’s also (a player personnel and coaching staff) attrition that always happen too.

“There is a fine line. I think it’s rare that teams come back. That’s why New England has had such a fantastic run. They continue to stay on top all of the time. It makes them pretty special.”

Speaking of attrition, just this week the Giants put on injured reserve RB Brandon Jacobs, 31, a big part of the Giants’ two Super Bowl teams who in 2012 left for San Francisco and a disastrous season. He returned to New York this season, but a knee injury limited Jacobs to 238 yards rushing.

It goes quickly in the NFL.  A couple missteps, and the canyon bottom comes up rapidly. That blue speck down there is the Giants.