A second base prospect, Russell Wilson played two seasons in the minor leagues while also playing quarterback at North Carolina State and Wisconsin. 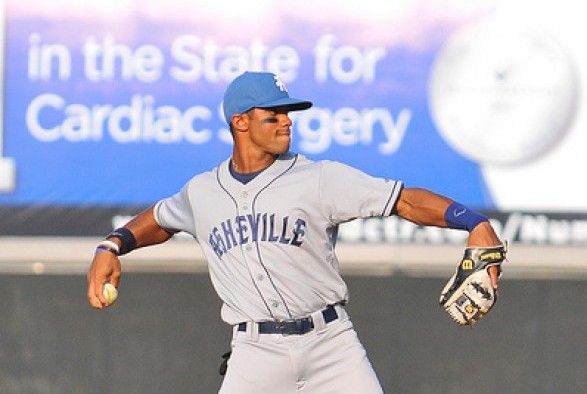 Although he has never provided any indication that he intends to switch sports, Seahawks quarterback Russell Wilson was selected by the Texas Rangers Thursday during MLB’s Rule V draft. The Rangers plucked Wilson, a second baseman, off the minor league roster of the Colorado Rockies, which drafted Wilson in the fourth round of the 2010 amateur draft.

Wilson was originally selected by the Baltimore Orioles in 41st round of the 2007 draft, but opted to attend college at North Carolina State. After the Rockies selected him, he played two years in their minor league system, including one with the short-season Tri City Dust Devils (2010) and another (2011) with the Class A Asheville Tourists. In his last season at North Carolina State, Wilson hit .306 with a .439 on-base percentage.

“(Daniels) asked me if I’m trying to go Bo Jackson. I thought about it before, I’m not going to lie,” Wilson said. “But no, I’m just focused on football.”

He batted a combined .229 with five home runs and 19 stolen bases while also playing quarterback at N.C. State and Wisconsin. In 2012, after leading Wisconsin to the Rose Bowl, he told the Rockies he would give up his baseball career in order to pursue football exclusively.

In one of Wilson’s final games as a pro baseball player, Wilson and the Tourists visited the Augusta Greenjackets. Batting eighth, Wilson went 1-for-3 with an RBI triple, a walk and two stolen bases in a 6-5 loss. He went 0-for-5 a couple weeks later in his final game, capping the day by grounding into a double play, but that came 24 hours after he hit his last home run, a three-run blast, June 24, 2011.

Jay Miller, scouting director for the Rockies, said this about Wilson: “He had some tools. Defensively, he was solid. He was learning his way around second base. At NC State, he was more of an outfielder, and he was a shortstop in high school. What drew us to him was the athleticism and plus-speed and his arm. We felt like, if we could develop the offensive side of it, we’d have a big league guy.”

Wilson didn’t know he was eligible to play professional baseball.

“I’m sure I’ll go down there for spring training and just talk to some of their players and hangout with some of them,” he said. “It’d be kind of a cool experience, but that’s down the road. I’m trying to win a game this week, and we’ll see what happens from there.”