Gonzaga’s Coleman gets to show off in Seattle

Gerald Coleman, a junior transfer from Providence, comes off the Zags’ bench and and goes straight to rim, including those at KeyArena Saturday. 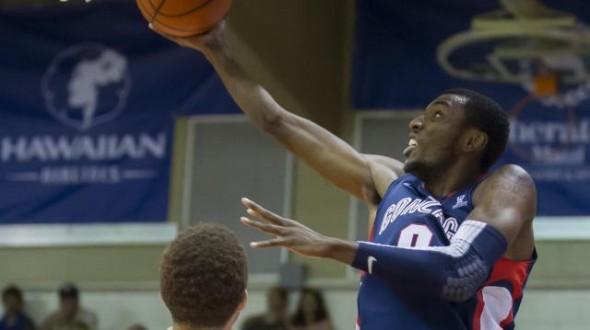 Junior transfer Gerard Coleman offers an offensive jolt for Gonzaga — when he isn’t turning over the ball. / Gonzaga University

Gerard Coleman? He leads the Bulldogs in gasps per minute among spectators.

“He’s an unbelievable player,” teammate Drew Barham said. “He really brings a dynamic and a piece of the game that we don’t have (otherwise).”

Barham was referring to Coleman’s electrifying slashes to the basket in transition. A 6-foot-4, 180-pound wing with tremendous quickness and leaping ability, Coleman looks like an NBA player waiting to happen —  on his good nights.

Last Saturday was one of those nights, when Coleman scored a season-high 21 points in 21 minutes off the bench in a win over New Mexico State.

Three nights later, Coleman played just six minutes and had almost as many turnovers (three) as points (four). He never left the bench in the second half of a comeback win at West Virginia.

“We’re too efficient of an offensive team to just be giving the ball away,” coach Mark Few said.

Two years ago, in his most recent visit to West Virginia, Coleman scored a career-high 30 points for Providence. However, the junior transfer seemed to take his benching in stride.

Coleman has already done that, helping 20th-ranked Gonzaga get off to a 9-1 start. The Bulldogs play their 11th annual Seattle “home” game Saturday night at KeyArena against South Alabama (5-4).

Coleman said all the winning with Gonzaga is one reason he’s “very happy” he left Providence’s struggling program, even though he’s not starting regularly for the first time since “maybe sixth grade.”

“I just felt I needed a change of scenery,” Coleman said. “I wanted a chance to be on a team that had a chance of winning a (conference) championship year in and year out and playing in the (NCAA) tournament, even if that meant sacrificing my stats.”

Coleman ranks fourth on the high-scoring Bulldogs with 10.4 points per game, but he’s just eighth in minutes played at 14.4. At Providence, he averaged 10.3 points as a freshman and 13.2 as a sophomore. The Boston native redshirted last season to satisfy NCAA transfer rules.

One of the most highly recruited high school players to wind up at Gonzaga (Scout.com ranked him 33rd in the nation), Coleman played on a national prep school champion  before turning down a gaggle of scholarship offers to attend Providence. Still, his outside shot is inconsistent, and Few said he’s “a work in progress” as a defender.

“I’ve come a long way in that department,” Coleman said. “I’ve still got a long ways to go.”