The Seahawks intercepted five Eli Manning passes and, despite not having their best offense, smothered the Giants at MetLife Stadium to improve to 12-2. 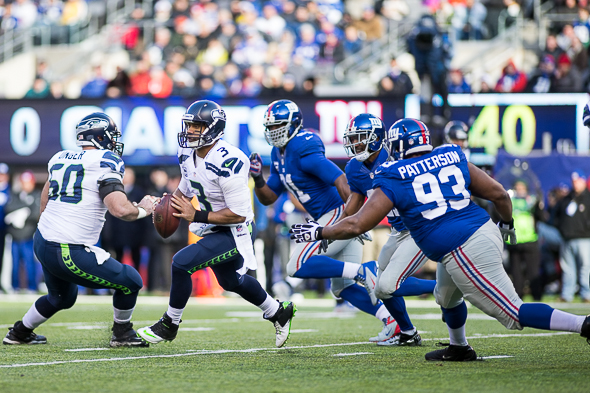 Russell Wilson didn’t have a great statistical game, but made enough plays to direct a 23-0 victory over the New York Giants Sunday at MetLife Stadium. / Drew McKenzie, Sportspress Northwest

The Seahawks didn’t have their best stuff offensively, but overwhelmed the New York Giants defensively, torturing Eli Manning into five interceptions and sacking him three times in a 23-0 victory at MetLife Stadium Sunday. Because of San Francisco’s 33-14 win at Tampa Bay, clinching the NFC West title and a first-round playoff bye awaits a win in either of the next two home games.

The Seahawks hit the 12-win mark for only the third time in franchise history (also 1984 and 2005), set a club record with their sixth road win and won for the 19th time in their past 22 games. The Seahawks scored touchdowns on a Marshawn Lynch 2-yard run and a 12-yard TD pass from Russell Wilson to Doug Baldwin, plus three Steven Hauschka field goals.

Wilson didn’t have an eye-popping stat game, throwing for 206 yards, one TD and one interception on an ill-advised deep throw into coverage (86.3 rating), but he improved to 6-1 following a loss and set an NFL record with his 23rd victory (breaking a tie with Ben Roethlisberger) for most by a quarterback in his first two seasons. He joined Dan Marino (68) and Peyton Manning (52) as the only quarterbacks to throw for 50 or more touchdowns in their first two seasons.

“These are marks this guy (Wilson) is going to continue to knock off,” said head coach Pete Carroll. “It’s really cool that he’s been able to do that, and he still has a couple of games left.”

Wilson’s 50th, a 12-yarder to Baldwin, bumped the lead to 23-0 lead and led to Wilson’s departure with nine minutes left in favor of Tarvaris Jackson. Wilson also exited with a team-high 50 rushing yards.

By that time, the only suspense was whether the Seahawks could record their first road shutout since Dec. 5, 2005 at Philadelphia (42-0). They locked it up with Earl Thomas’s end zone interception with 4:17 to play, Seattle’s fifth, all at Manning’s expense.

The picks — two by Richard Sherman, two by Byron Maxwell and one by Thomas — are the most since purloining five vs. Arizona Dec. 9, 2007 (record is 7 vs. San Diego in 1998). The pick party was only part of it. Seattle held the Giants to 181 total yards, many of them late, while sacking Manning three times (1.5 sacks by LB Bobby Wagner), hitting him seven times and forcing him into seven hurries.

It added up to the first shutout suffered by the Giants at home since Sept. 4, 1995.

“It was very exciting day for us and we’re very happy we had all those turnovers,” Carroll said. “The win was more important than the shutout, but in that locker room the shutout was very important. It’s very unique when you get that. I thought it was as complete a game we’ve had all year, in all phases. It’s just really cool to come to New York and play well.”

In prior years, the Seahawks almost always lost when they played at 10 a.m. PT in the Eastern time zone starts. This year, they went 4-1 in such games.

“That’s hard to do that historically,” Carroll added, “but now that we’ve done it, it doesn’t matter anymore.”

The Seahawks, who entered the game having allowed a league-low 15 punt return yards, ceded four to Rueben Randle, the first such yards against Seattle since Oct. 28. But the Seahawks extended to nine the number of weeks they have gone without allowing a rushing touchdown (at Arizona).

The Seahawks settled for a field goal on their second drive, a 49-yarder from Hauschka, after Golden Tate dropped a first-down throw from Wilson, whose 12-yard completion to Lynch put Seattle in position to score.

Hauschka’s 44-yard field goal gave Seattle a 13-0 halftime lead that could have been 17-0 if Tate hadn’t had a touchdown catch disallowed for stepping out of bounds.

The Seahawks intercepted Manning three times in the first half, twice by Sherman, once by Maxwell, and held the Giants to 54 total yards while racking up 209. New York’s deficit would have been greater if the Giants hadn’t taken Seattle out of several scoring opportunities with three sacks against Wilson.

Hauschka nailed a 24-yard field goal, extending Seattle’s lead to 16-0 at the 8:50 mark of the third quarter. The score was set up by Tate’s 17-yard punt return, a Wilson scramble of 15 yards and two completions to Jermaine Kearse for 13 and eight yards. The Seahawks twice had cracks from the two-yard line, but the Giants thwarted Lynch both times.

Maxwell’s second pick, and the fourth off Manning, set up the Seahawks at the New York 21-yard line to open the fourth quarter. A Wilson scramble to the six gave Seattle a first down. Facing third and goal, Wilson threw a 12-yard TD to Baldwin.

NEXT: The Seahawks return to CenturyLink Field Sunday to face the Arizona Cardinals in a 1:05 kickoff. They conclude the regular season a week later with a rematch with the St. Louis Rams.