The Seahawks will never get official credit for the feat, but their 19 yards allowed on opponent punt returns is the best in NFL history through 14 games. 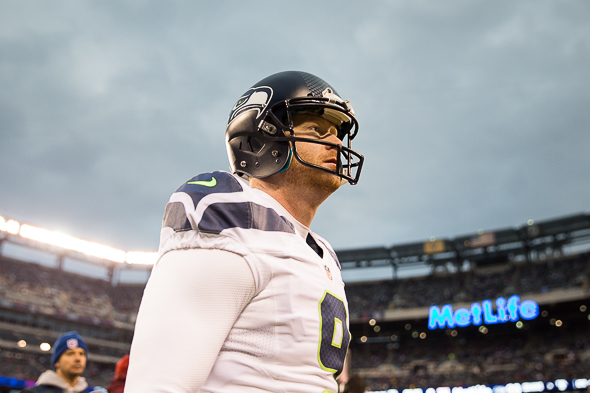 While the New York tabloids seized upon — and predictably beat to a pulp — Tom Coughlin’s use of the word “pathetic,” to describe the performance of his Giants Sunday, the Seahawks had numerous positives to ponder: A 12-2 record, five interceptions, a road shutout (23-0), and two more achievements by Russell Wilson, whose feats placed him among the most successful young quarterbacks of the Super Bowl era.

Seattle punter Jon Ryan did not induce much lip-flapping, although he was primarily responsible for the Seahawks establishing an NFL record that will officially never exist: Fewest single-season yards allowed on opponent punt returns.

Ryan booted seven times for 289 yards, a 41.3 yard average, with a long of 53. One of his kicks went for a touchback, three were downed inside the 20, two more were fair catches and one was returned. That occurred early in the second quarter when Ryan punted on fourth-and-12 from his 17.

Ryan’s kick sailed 53 yards to the Giants’ 30-yard line, where Rueben Randle returned it four yards before Jeremy Lane tackled him. The play ultimately had no bearing on anything relating to the game’s final result, but it represented a remarkable oddity.

The four punt return yards by Randle marked the first such gain against Ryan and the Seahawks since Oct. 28 against the St. Louis Rams, when Tavon Austin returned three punts for a combined seven yards.

In five subsequent games against Tampa Bay, Atlanta, Minnesota, New Orleans and San Francisco, Ryan and the Seahawks punted 15 times. Only three were brought back – for zero yards.

Now, through 14 games, the Seahawks have permitted a total of 19 punt return yards. This bring us to the story of Donny Anderson and the 1967 Green Bay Packers. Coached by Vince Lombardi, those Packers went 9-4-1 and won the Super Bowl with seven future Hall of Famers. Donny Anderson wasn’t among the seven.

He also did all of Green Bay’s punting and never had a better year than 1967. A left-footed kicker out of Texas Tech, Anderson punted 65 times for a 36.6-yard net. Opponents returned 13 of those punts for 22 yards. That’s the NFL record for fewest punt return yards allowed in a season.

Or was. Having played the same number of games as the 1967 Packers, the 2013 Seahawks have allowed 19 punt return yards.

This is really a team record vs. an individual one, as is Wilson’s 14-0 mark at CenturyLink, and is more reflective of his ability to manage a game than his individual skills. More impressive about Wilson individually is that Sunday he became the third quarterback to reach 50 touchdown passes in the first two seasons of a career. Wilson’s 50 (with two games remaining) trails Dan Marino (68) and Peyton Manning (52).

The TDs have come — not the case with either Marino or Manning — with a team oriented to the run more than the pass.

Manning has become one of the greatest (if not the greatest) quarterback of the Super Bowl era. But consider his early learning curve compared to Wilson’s. To go with his 52 TD passes in 1998-99, Manning threw 43 interceptions, a plus 9 in TDs. Offsetting Wilson’s 50 are 18 picks, a plus 32.

Wilson isn’t dinking, either. After 14 weeks, he leads the NFL in deep passing (throws targeted 20 or more yards downfield) completion percentage at 51.9 compared to Manning’s 47.2, according to Pro Football Focus — and this despite the fact that on throws traveling 10 or more yards Sunday, Wilson was mediocre, going 4-for-12 for 68 yards, no TDs and one interception.