Interim coach Marques Tuiasosopo is still directing the quarterbacks at practice. That was one of the few parts of his job that didn’t change after Steve Sarkisian left for USC. 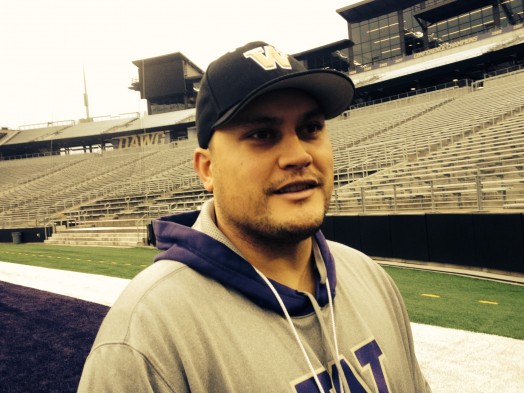 A lot of this is new to Marques Tuiasosopo.

Leading practice. Scheduling team meals. Planning meetings. Deciding what uniform combination the Huskies wear. All are duties Tuiasosopo never had to worry about when he served as Washington’s quarterbacks coach under Steve Sarkisian.

“There’s just things administratively that you have to be on top of, and things that as a position coach, you don’t need to worry about,” he said. “Usually I’m just worried about what our quarterback is going to do when (defenses) blitz.”

The latter won’t change when the Huskies face BYU in the Fight Hunger Bowl Dec. 27. As with the regular season, Tuiasosopo’s primary game duty will be relaying advice through his headset microphone into quarterback Keith Price’s helmet.

Working under Tuiasosopo’s guidance, Price completed 65.5 percent of his passes. The senior had 2,843 passing yards, 20 touchdowns and five interceptions.

“He’s a real player’s coach,” Price said of Tuiasosopo. “He’s a great friend, a great leader, and we’re going to play hard for him. He’s still our QB coach. We’re still watching film, we’re still preparing as if Sark was here. He’s spending the same amount of hours with me (like) when Sark was here. Nothing’s changed.”

Tuiasosopo, 34, set the school’s career mark for all-purpose yards from 1997-2000 as a dual-threat quarterback. He spent eight years in the NFL with the Raiders and Jets as a backup before retiring in 2008. Tuiasosopo worked under Sarkisian as the Huskies’ assistant strength coach from 2009-10, then as a graduate assistant and tight ends coach at UCLA from 2011-12, before returning to UW in December of 2012 to tutor Price.

UW coach Chris Petersen attended practice Monday but has mostly stayed out of the limelight while he recruits and forms his coaching staff. Price said he speaks to Petersen daily but doesn’t think the Huskies will deviate much from the spread, uptempo offense that ranked third in the Pac-12 in scoring (38.5 points per game).

UW defensive coordinator Justin Wilcox and defensive line coach Tosh Lupoi have been at practice, but various outlets reported they may join Sarkisian at USC if the schools can settle buyout clauses in their contracts.

“For these guys to stay around not knowing what happens next year means a lot,” said defensive lineman Danny Shelton. “It makes us want to play harder.”

“I can only speak for myself. For me, it doesn’t change anything,” Kikaha said. “For (Tuiasosopo), he told us and showed us that he’s going to finish the year strong and see what happens after that. We don’t have to worry about where he’s going to end up.”

Tuiasosopo didn’t sound concerned about where he might end up, either.

“I love being with the staff that’s still here and these kids,” Tuiasosopo said. “We’ve got a few days left, so we’re going to take advantage of all the days that we have.”