At 33, Cardinals QB Carson Palmer is enjoying a bounce-back season under the careful direction of first-year Arizona coach Bruce Arians. 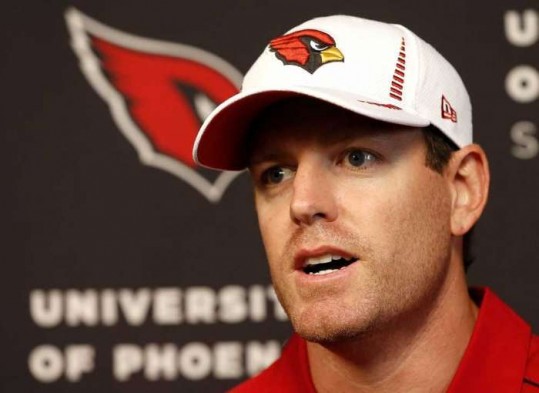 RENTON — After the Seahawks beat the Cardinals 34-22 in Week 7, Carson Palmer’s first season with new coach Bruce Arians took a U-turn. In that whipping at University of Phoenix Stadium, Seattle’s defensive front had seven sacks and two interceptions and held Palmer, who went 30 of 45, to 258 passing yards.

The Cardinals’ record was 3-4, and the 33-year-old Palmer was playing like a confused rookie in Arians’ pass-heavy, go-deep offense. Through seven games, Palmer had eight touchdown passes to 13 interceptions and was sacked 20 times. He was averaging 249 passing yards per game, but waning was his ability to avoid pass rushers in collapsing pockets.

Two months later, the Cardinals are 9-5. They’ve won six of  the past seven and enter Sunday’s game in Seattle (1:05 p.m., FOX) needing wins in their final two regular-season games to have a chance at sneaking into the NFC playoffs.

“I’ve been in the (offensive) style where you just run the same plays over and over again, but just out of different formations, and that’s not what this is,” Palmer said. “There are a lot of different concepts, new concepts every week, plays that we installed today that we haven’t run in a long time. He doesn’t care if it was unsuccessful six weeks ago, if it works against the scheme he puts it in.”

The success of the Palmer-Arians tandem is among the biggest surprises of the 2013 NFL season. A season that turned for the Cardinals after the Seahawks beat them on Thursday Night Football.

“When you put it all together for the first year, it takes a little time, especially offensively,” Arians said. “You could see after that week us continue to start getting better offensively.”

“They’re just cleaner, sharper, better at everything,” he said.

Palmer was an All-America selection and Heisman Trophy winner under Carroll at USC in 2002. That Trojans team went 11-2, shared the Pac-10 Championship with Washington State, then walloped Iowa 38-17 in the Orange Bowl. The Trojans finished No. 4 in the country and Palmer was the Bengals’ No. 1 pick in the 2003 NFL draft.

“I think he’s playing the way you could always imagine him to play. He’s had a lot of good stretches,” Carroll said. “He’s put up a lot of yards over the years in his different situations. It looks to be kind of the culmination of his career.”

Early in last week’s 37-34 overtime win against the Titans, Palmer sustained a high ankle sprain when Tennessee defensive end Kamerion Wimbley hit him low. Wimbley earned a roughing the passer penalty, but Palmer stayed in the game. Palmer practiced Wednesday and is expected to start against Seattle’s No. 1-ranked secondary.

“He’s really sharp. He’s making good choices. He’s got pretty good protection,” Carroll said. “He’s got good receivers to go to. All of that is fitting together really well. Bruce has always had good quarterback play, and he’s getting it again.”

Seeing a fully healthy Percy Harvin before the end of the regular season is becoming less likely. Harvin didn’t practice Wednesday and Carroll provided no update on the wide receiver’s injured hip.

“We’re just trying to see if we can get back out to work and get him on the field,” Carroll said.