Tui: Lupoi will coach bowl game ‘as of now’

UW interim coach Marques Tuiasosopo said he hasn’t been contacted by the UW compliance department in the wake of allegations that Tosh Lupoi paid a former recruit. 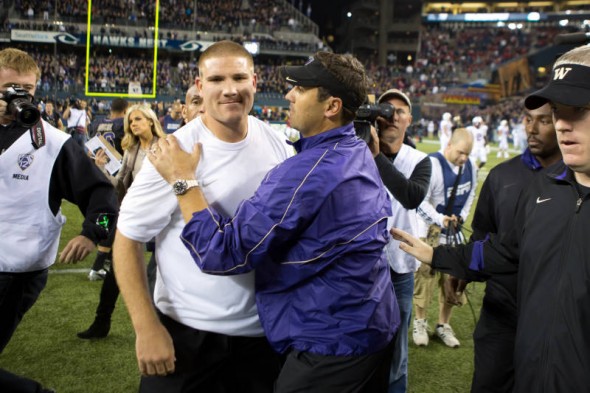 Tosh Lupoi still has his job coaching Washington in its bowl game as the school investigates allegations of recruiting improprieties. / Gohuskies.com

Since being named Washington’s interim football coach, Marques Tuiasosopo has stressed how important it is for players to cope with Steve Sarkisian’s hasty departure to USC.

Asked Thursday if Lupoi will join the Huskies in their bowl game, Tuiasosopo was quick to answer, but far from definite.

“As of right now he’s still coaching with us,” he said. “A lot of things happen. You got to take it in stride. It’ll all come out. Right now my responsibility is to prepare this team on the football field and make sure they’re acting well off the field, and that’s what I’m doing.”

Per the Times, Lupoi, in his second year, is under investigation by USC and UW for allegedly making two separate payments totaling $4,500 so former defensive line recruit Andrew Basham (Lynnwood High School) could take online classes and receive personal tutoring. Paying a recruit directly or indirectly is a violation of NCAA bylaws.

The Times story described Lupoi making two separate Hollywood-esque cash handoffs to Mike Davis, Basham’s throwing coach for Lynnwood High’s track team. The first payment came Feb. 25 at the Ram Restaurant in Northgate Mall. Davis agreed to meet Lupoi for dinner. When Davis went to the bathroom mid-meal, Lupoi followed and said there was a bag waiting at the table when he returned, Davis told the Times.

The second handoff came May 18, the story explained, shortly after Davis and his wife met with Lupoi at his office inside Husky Stadium to discuss Basham’s recruitment. An excerpt provided greater detail of how the meeting ended:

“When I picked it up he kind of smiles,” Davis said.

The men returned to Lupoi’s office, Davis said, and then the group went downstairs to a weight room where Lupoi weighed Basham, measured his hands and continued talking. When the group went to their car to leave, Davis said he opened the cup and found $1,500. He got in the driver’s seat and Andrew sat in the front passenger seat. Davis’ wife sat in the back and Davis handed her the coffee cup. Heidi Monroe-Davis said she opened the lid and saw the money.

They then drove to Basham’s father’s auto repair shop and gave him the cup with the money inside. “He looked in the cup and said, ‘Oh, that’s a good cup of coffee,'” Davis said.

According to the Times, Davis and his wife, Heidi, are scheduled to meet with officials from USC and the UW in Seattle Friday. Davis said he reported to the NCAA Lupoi’s alleged violation last week.

Earlier reports indicated Lupoi would join Sarkisan’s new staff, but that seems unlikely after an unnamed USC official told the Times the 29-year-old had “a less than zero” chance of getting hired.

Tuiasosopo said Thursday he hasn’t been contacted by the UW’s compliance department, but gave no indication if he expected to take part in the school’s investigation.

Lupoi, meanwhile, still has one season remaining on a three-year, $350,000 annual contract he signed in 2012 after jumping from Cal to Washington. At the time, the move was perceived as controversial because it came a few weeks before signing day, and Cal recruit Shaq Thompson switched his commitment to Washington after Lupoi left Berkeley. A few months later, Lupoi was taken off the recruiting road during the spring evaluation period after he self-reported a secondary NCAA recruiting violation.