Cougs’ fans not buying in for 1st bowl in decade

The New Mexico Bowl is not on anyone’s bucket list, but it is Washington State’s first bowl in 10 years, yet the ticket allotment of 5,000 didn’t sell out. 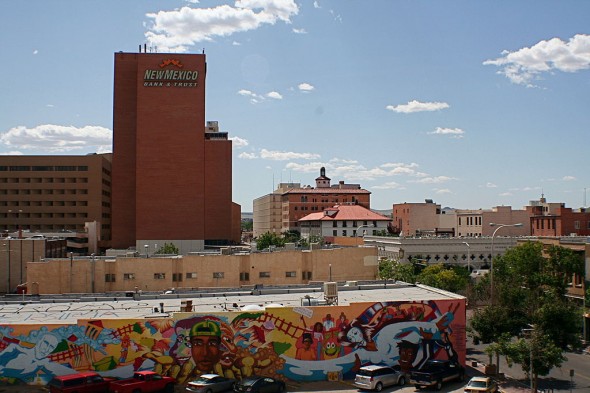 Albuquerque has the Rio Grande and Route 66 flowing through it, but not too many Cougars fans. / Wiki Commons

ALBUQUERQUE, N.M. – Oh, what a demanding lot we are, the sports lovers of America.

We want our sultans of sweat to excel not only on the field, but off it as well. We prefer that our heroes be colorful, but not go overboard. We expect our teams to succeed not just consistently, but constantly.

Which brings us to the unique fan base of the Washington State Cougars.

Most Wazzu alums are so proud of their school, one presumes they carry photos of Martin Stadium in their wallets in lieu of photos of their children. You only have to witness the thousands of WSU license plates on our state’s roadways – outnumbering U-Dub plates by a gazillion – to surmise that Cougs are loud and proud when all matters crimson are the subject.

It is puzzling, then, that WSU fans so rarely fill the Pac-12’s teeniest (by far) football stadium. Or donate enough money to satisfy the long-stated goal of paying for all athletic scholarships. Or fail to purchase even 5,000 tickets for Saturday’s New Mexico Bowl. The updated count Friday afternoon was 4,605.

A WSU official said that, contrary to an Albuquerque TV report, no extra tickets were requested by the school.

True, this bowl game is not one steeped in tradition. Last year’s game – a wildly entertaining event that resulted in a 49-48 triumph for Arizona over Nevada – drew less than 25,000 eyewitnesses. A similar turnout seems likely for Saturday’s showdown between Washington State and Colorado State (11 a.m., ESPN).

Indeed, a common response local residents make upon learning a visitor is in town for the bowl game has been, “Who’s playing?” Mind you, the good people of Albuquerque rarely pay undue attention to their own University of New Mexico football team.

Perhaps it should not be surprising that Washington State supporters also seem somewhat muted in their fervor over the bowl game. True, WSU is a mere 6-6, the Rams 7-6. The Cougars gave up 52 or more points in four out of five games at one point, and they flamed out late in a regular season-ending loss at Washington. The Rams own no victories over teams that have winning records.

Still, it is WSU’s first bowl game in 10 years, and for that there should be at least a small celebration among Cougars everywhere. WSU survived a hellish schedule and often held its own and then some in a conference loaded with quality teams. Playing in a bowl game – any bowl game – is a notable sign of progress for a WSU football program that has so often sloshed its way through the murky depths of gridiron hell.

Remember the start of the Paul Wulff tenure in 2008? The 66-3 home loss to California? Followed shortly thereafter by the 63-14 home loss to Oregon? Followed shortly thereafter by the 69-0 home loss to USC? The latter game was the one in which Pete Carroll, then coaching the Trojans, mercifully let the clock run out deep in WSU territory at the end of the first half. He cleared the bench after intermission and ran virtually no plays but runs up the middle, or the Trojans would have scored 100 points.

Even a year ago, the start of the Mike Leach era was marred by unsightly late-season defeats at Utah (49-6) and Arizona State (46-7). Not to mention the Marquess Wilson fiasco. You know, when the oh-so-talented but oh-so-sensitive wide receiver quit the team and accused Leach and his staff of everything short of waterboarding, then pulled a hamstring racing to distance himself from his (mis)statements.

The Cougars have come so far since finishing 3-9 a year ago. Players are bigger, faster, stronger. Perhaps most importantly, they are so much tougher mentally.

“This staff has done a good job of really changing the culture and changing the standards that we hold ourselves to, and each other,” senior kicker Andrew Furney said.

A poor performance on national television Saturday against a capable but hardly overpowering Colorado State squad would represent a significant setback for the Cougars. It is hardly unheard of for teams unaccustomed to success to relax once they finally reach a bowl game. Leach said the issue “does cross your mind,” but he expressed confidence it won’t impact the Cougars.

“We don’t want to go down there just to have fun,” junior running back Marcus Mason stressed. “We want to have fun while winning the game.”

Little-known fact: If the Cougars win Saturday, their all-time bowl record will improve to 7-4. Only USC (32-18) and Utah (13-4) have better bowl records among Pac-12 teams, and the Utes did not join the conference until 2011.

It should be noted that only Arizona (7-9-1) has as few bowl wins as WSU among the Pac-12 brethren. Mind you, the Wildcats’ bowl history includes such memorable events – not! – as the Salad Bowl, the John Hancock Bowl and the San Diego East-West Christmas Classic.

The college football landscape has changed dramatically in recent years, of course. Seventy of the 123 Football Bowl Subdivision teams now play in bowl games each and every year, so the Cougars no longer will go 50 years between bowl games, as they did from 1931 to 1981.

The rebuilding project at Washington State is still in the formative stages, but a bowl victory would provide a booster shot for current and future Cougars players. And, one hopes, Cougars fans.

“Once we go to this bowl,” Furney said, “and we go out and experience it and hopefully get a ‘W’ and play our best game and enjoy the whole atmosphere of the bowl, I think these young guys are going to say, ‘Hey, let’s get back and let’s do that again. That was fun.’”