The Seahawks had a chance to win the NFC West title and wrap up home-field advantage throughout the playoffs, but couldn’t overcome Arizona’s defense and lost 17-10 Sunday. 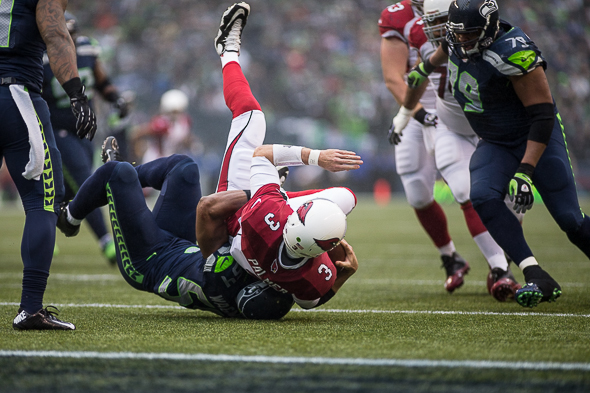 The Arizona Cardinals defense vexed and perplexed Russell Wilson Sunday as no NFL team has done. Then the Cardinals offense stunned Seattle with a 31-yard Carson Palmer-to-Michael Floyd touchdown pass with 2:20 remaining to defeat the Seahawks 17-10 at CenturyLink Field, delaying Seattle’s coronation as NFC West champion and the conference’s No. 1 seed in the playoffs.

The loss (12-3) means Seattle will have to wait at least until Monday night, when San Francisco hosts 4-10 Atlanta, to see if the 49ers lose. Or wait a week, when the Seahawks host St. Louis, to do what they could have done Sunday, but didn’t.

The Seahawks were nearly helpless against a relentless Arizona defense that bottled up Wilson until his 11-yard TD pass to TE Zach Miller with 7:32 remaining lifted Seattle to a 10-9 lead.

But after that, the Cardinals chewed the clock until 2:20 when Palmer, intercepted four times and sacked twice, found Floyd in the left corner of the end zone on a play that victimized Byron Maxwell for what proved to be the winning points.

The Seahawks had a final gasp, but a controversial interception by Karlos Dansby — a Wilson throw intended for Doug Baldwin that appeared to bounce off the turf as well as Baldwin’s arm — was ruled valid and Arizona ran out the clock.

Two notable streaks ended, the concurrent 14-game home winning run of the Seahawks and Wilson at CenturyLink. Pressured constantly, Wilson never did find rhythm, Arizona effectively keeping him in the pocket all game and preventing edge plays where he often creates havoc.

Wilson looked nothing like the usual Wilson, completing 11 of 27 for 108 yards, a passer rating of just 49.6, He was sacked four times and never really had a chance to do anything against the best defense the Seahawks have seen all season. The Cardinals overwhelmed Seattle’s offensive line for most of 60 minutes, calling into question Seattle’s viability as a Super Bowl contender.

Even the fact that Seattle recorded four interceptions of Palmer, two by Richard Sherman, didn’t have much effect. It only made the final score closer. The Seattle offense just couldn’t cope with Arizona. Even when the Seahawks were in great position to score, just before halftime, things went wrong.

The Seahawks had a first down at the Arizona three-yard line. But they couldn’t punch it in with two Marshawn Lynch runs, then an incompletion. The usually reliable Steven Hauschka clanked a chip-shot field goal — his first miss of the season — that would have given Seattle the halftime lead at 6-3.

The Seahawks nearly gave up a touchdown on Arizona’s first drive, but Kam Chancellor intercepted Palmer’s tipped pass in the end zone. A 63-yard pass from Palmer to Brittan Golden set up Arizona for a chance for six or three. Chancellor’s interception, his third of the season and Seattle’s 23rd, nixed it.

The Seahawks started with a pair of 3-and-outs as Wilson missed his first four throws, but following a Sherman interception, his league-leading seventh, the Seahawks mounted a scoring drive that culminated in Hauschka’s 27-yard field goal. Wilson threw 18 yards to Jermaine Kearse and Lynch ran for 19.

Jay Feely capped a 75-yard, eight-play drive with 2:15 remaining before halftime with a 39-yard field goal to tie the game 3-3. But with 40 seconds to play, Malcolm Smith intercepted Palmer (first of Smith’s career), off a tipped pass by Chris Clemons, returning the ball to the Arizona three, where the possession fizzled.

Wilson went an uncharacteristic 6-for-16 for 47 yards in the first half. Despite three interceptions of Palmer, the Seahawks mounted virtually no offense, just 112 yards to Arizona’s 182.

To start the second half, the Seahawks set themselves up with good field position twice.  Wilson’s 27-yard scramble gave Seattle a first down in Arizona territory, but turned into a punt. So did the next possession, started with a 29-yard punt return by Golden Tate.

Arizona, took advantage of a face-mask penalty on Michael Bennett with 27 seconds left  in the third quarter, getting a 46-yard field goal from Feely for a 6-3 lead. On the enusing kickoff, Robert Turbin coughed up the ball (his second return bobble of the game), giving Arizona a first down on the Seattle 15. But Sherman picked off his second pass (Seattle’s fourth) as the Seahawks averted another calamity.

Two major penalties on Seattle, a 15-yard roughing penalty on Tony McDaniel and a 15-yard interference call on Sherman, set up the Cardinals at the Seahawks 16. Feeley kicked his third field goal for a 9-3 lead.

Baldwin, replacing Turbin, then returned the kickoff 37 yards. A 36-yard pass from Wilson to Tate, plus a positive fumble forwardto Kearse for an additional seven yards, gave the Seahawks a first down at the Arizona 18. Two plays later, including a 13-yard Wilson to Kearse pass, Wilson threw the TD pass to Miller for a 10-9 lead with 7:29 to play.

Arizona methodically worked the clock. With 2:13 to play, Palmer looped a fade pass to Floyd down the far sideline for the decider. RB Rashard Mendenhall’s two-point conversion gave Arizona a 17-10 lead.

The loss was Seattle’s first at CenturyLink since a 19-17 setback to San Francisco on Christmas Eve, 2011.