If the Seahawks lose to the Rams, they will be the first team since the 16-game schedule to win 12 of the 14 games and blow the final two contests at home. 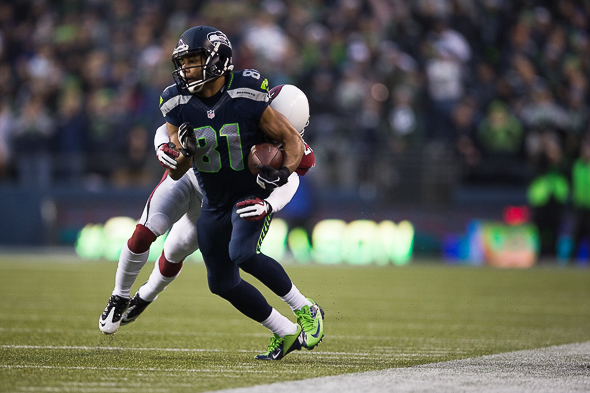 The Seahawks (12-3) botched an opportunity to claim the NFC West, snatch the conference’s No. 1 seed and secure a first-round bye and home-field advantage throughout the playoffs when they lost to the Arizona Cardinals 17-10 at CenturyLink Field Sunday. They also squandered the game in historic, if obscure, fashion, although it was not immediately obvious.

When Carson Palmer threw a 31-yard touchdown pass to WR Michael Floyd over CB Byron Maxwell with 2:13 remaining for the winning points, he became the first quarterback in 60 years to toss a game-winning TD in the last three minutes of the fourth quarter after hurling four or more interceptions without a TD prior to that.

The Seahawks can still nail down conference and division spoils, but only if San Francisco miraculously loses at home to Atlanta Monday night, or if Seattle closes out the regular season with a home victory over St. Louis Sunday, or, failing that, the 49ers, who finish at Arizona, also lose on the final weekend.

If the Seahawks and 49ers tie at 12-4, San Francisco wins the NFC West and Seattle’s chances of reaching the Super Bowl drop dramatically,  if regular-season records are any indication.

If the Seahawks could have finished 14-2, they would have been the 25th team since 1978 to win 14 or more. Of the previous 24, only five failed to win a playoff game and 14 reached the Super Bowl, nine winning it. The breakdown:

If the Seahawks lose Sunday, the question: How many teams have won 12 of their first 14 and dropped their final two, and what happened to them? The answer isn’t pretty. Only three teams since 1978, including one we’re familiar with, have done that:

If the Seahawks lose to the Rams (7-8), whom they barely defeated 14-9 at the Edward Jones Dome Oct. 28, they become the first team since the adoption of the 16-game schedule to win 12 of 14 and blow the final two at home. Which is not far-fetched, based on what happened in St. Louis two months ago and the matchup problems the Rams present.

SEAHAWKS VS. RAMS REWIND: Seattle won, but did so only after overcoming the following:

WILSON AND LYNCH: Wilson rarely had time to throw Sunday, and when he did he sometimes missed open receivers. He finished with an 11.5 Total QBR, the worst of his 31 career starts. His passer rating of 49.6 was also his worst, surpassing his previous nadir of 49.7 at Houston Sept. 29.

Lynch rushed for 71 yards, but only 11 in the second half, behind an offensive line that’s average at best. Lynch averaged fewer than 4.0 yards per rush for the fifth consecutive week. How his production has fallen off, according to Pro Football Focus:

THE UPSIDE: The Seahawks plucked four interceptions off Palmer, two by Richard Sherman, one week after stealing five from Eli Manning of the Giants. On only three other occasions in their 38-year history have the Seahawks had as many as nine interceptions in a two-game span: In consecutive games against Houston (5) and Washington (4) in 1980; vs. Kansas City (6) and the Raiders (3) in 1984; vs. Arizona (5) and Philadelphia (4) in 2007.

PALMER’S GAME-WINNING TD: Arnie Galiffa played quarterback at Army and made only one NFL start, for the 1953 New York Giants against the Philadelphia Eagles Nov. 8. A week earlier, Galiffa came off the bench against the Cardinals, tossed four interceptions, and then threw the only touchdown of his pro career, a 75-yard strike to Kyle Rote inside of three minutes to play, to give New York a 23-20 win. According to Elias, the next player to throw four INTs before winning a game with a touchdown pass inside of three minutes: Carson Palmer at Seattle Sunday.