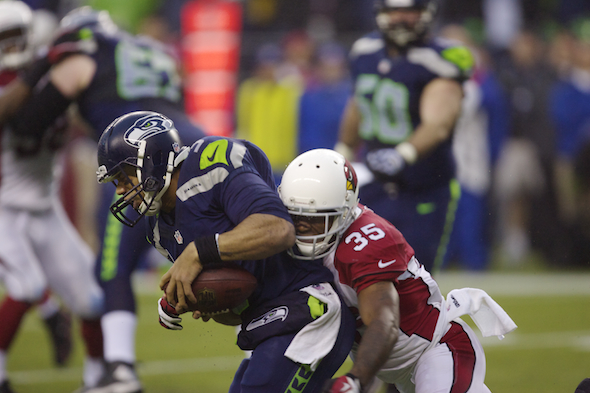 Whether it was blitzes or in coverage, the Arizona defensive backs, including backup Javier Arenas, bottled up the Seahawks offense. / Drew Sellers, Sportspress Northwest

Regarding the Seahawks offense, the ooga horn sounded. QB Russell Wilson reported for work at 4:30 a.m. Monday, ahead of coach Pete Carroll. They met in the film room to re-watch a game that neither saw coming, but exposed an offensive vulnerability for the world to see.

“We’re struggling – there’s no doubt about that,” Carroll said on his weekly radio show Monday on ESPN 710. “We’ve not been as good as we’ve been.”

Carroll cited a symptom – the Seahawks converted two of 13 third downs. Over the the past three games, he said the rate was 26 percent, after a five-game average of 54 percent.

That’s the problem,” he said. “We were great for awhile – 10th or 11th in the NFL. We struggled through the last few weeks.”

More specifically, the Seahawks have been slowed by those who know them best — the NFC West opponents.

The Seahawks had 192 yards of offense against Arizona, only 71 on the ground from RB Marshawn Lynch (11 in the second half). In the first game against Sunday’s opponent in the final regular-season game, the Rams, in St. Louis Oct. 28, the Seahawks finished with 135 yards after Wilson lost 54 yards on seven sacks. Marshawn Lynch had 44 yards rushing.

And in the 19-17 loss in San Francisco two weeks ago, the Seahawks had 264 yards, with Lynch gaining 72. See a pattern here?

All were close, tough contests against three of the NFL’s best defenses. The Seahawks lost two of three, and only because the Rams broke down on a single play, an 80-yard pass-and-run touchdown from Wilson to WR Golden Tate in the third quarter, did the Seahawks avoid being swept in the division matchups.

The NFC West defenses have figured out the Seahawks offense – stack the box to stop Lynch, confine Wilson to the pocket and take the chance that cornerbacks can stay with the Seahawks’ middling group of receivers.

It’s exactly why the Seahawks spent so much treasure in the off-season to acquire WR Percy Harvin, whose absence this season after hip surgery can now be called a serious blow.

After reviewing the game film, Carroll acknowledged that the ability of Arizona’s  cornerbacks, Patrick Patterson and Jerraud Powers, to stay with Seattle’s receivers was decisive in thwarting third downs.

“We pass-protected pretty well – he had time to throw,” Carroll said. “We got covered up quite a bit. We tried to get down the field on them (because) they played quite a bit without a safety (defending against Lynch). So we had some shots at them. We took them, and (the cornerbacks) played really well. They won the one-on-ones.

“The ball was there on time, and they knocked it away. We didn’t drop the passes; they defended them better than we thought they would. They kinda had us on that, unfortunately.”

Wilson completed 11 of 27 passes, with a long of 18 yards, and was nearly bereft of explosive plays. Meanwhile, the Cardinals, to the surprise of no one – they came into the game leading the NFL in run defense – stuffed Lynch.

“Dominate the line of scrimmage,” said Arizona DT Darnell Dockett after the game. “You have to beat the guys up front and give him no lanes, no full-speed ahead so he can cut out of the gaps.”

That’s what happened on the decisive sequence at the end of the first half. Set up at the Cardinals 3-yard line after an interception by Malcom Smith that he returned 32 yards, the Seahawks came away with no points after Lynch was twice denied, Wilson threw incomplete on a naked bootleg pass, and Steven Hauschka missed a chip-shot field goal.

“That was a walk-in play for us,” he said. “We had a good play called, we blocked it well, we just didn’t read it properly, and bounced (to the right for no gain).

“On third down, they knocked us around pretty good and couldn’t get the ball cleanly to (targeted FB Michael Robinson). We blocked well on the naked bootleg.”

What should have been a 10-3 lead at halftime remained 3-3 and gave the Cardinals belief that they had a shot at the big upset that would rock the Seahawks and NFL.

Carroll was terse about WR Percy Harvin, saying he won’t practice this week as he continues to rehab from hip surgery. Asked if he was ready to declare Harvin done for the season, he said, “We’ll figure that out.”

CB Walter Thurmond returns to practice this week after serving a four-game suspension for violating the NFL’s substance-abuse policy, reportedly for marijuana.

“We’ll see how it goes this week,” Carroll said. “No big statement; he jumps back in. It’s a real boost to get Walter back.”

“He was real physical, he seemed very comfortable,” he said. “There were a couple of plays he could have done better, but he did well.”