Thiel: Wilson admits to ‘bad day,’ but was it?

QB Wilson puts the burden of Seahawks’ offensive falloff on himself, but it’s also true that defenses, led by the Rams, have figured out how to limit him. 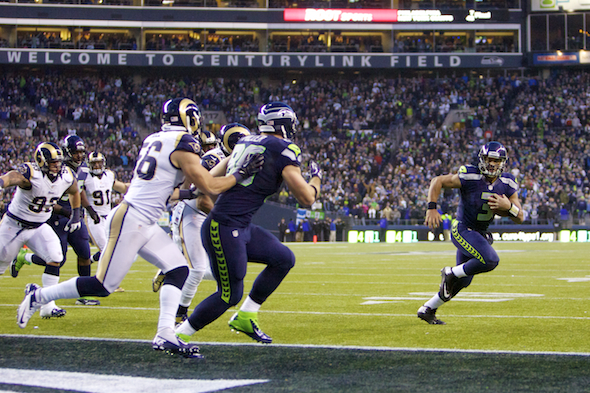 The rushing of Russell Wilson has become less effective as defenders gear up to stop him. / Drew McKenzie, Sportspress Northwest

One for the books: A highly regarded professional athlete who didn’t perform well said simply, “Sometimes, you just have a bad day.”

Is it legal to say that? I mean, I know it’s Washington state, where most everything is legal, but still, isn’t candor a violation of some law, or public policy, or code, or manners? And especially when Russell Wilson says it about himself, that can’t be allowed — can it?

In his short, spectacular sports career in Seattle, Wilson never had a bad day on the field, until Sunday. When the Seahawks quarterback completed only 11 of 27 passes in an entirely unexpected home loss to Arizona, fans and analysts blamed the offensive line, the receivers, Marshawn Lynch, Pete Carroll, offensive coordinator Darrell Bevell, even the defense after playing 59, but not 60, minutes of stellar ball.

The Mariners were blamed, which is what happens after becoming the civic punching bag.

But to blame Wilson, the precocious 100-year-old quarterback in a 25-year-old’s body . . . the idea was so unfamiliar as to border on the inconceivable.

Apparently, Wilson decided Thursday to walk reporters through their temporary incomprehension by admitting his shortcomings. No pun intended.

“Sometimes you just have a bad day,” he said. “Sometimes, your days are great, sometimes they’re good, and sometimes you have one or two bad days in there. Hopefully, you can get rid of those days.”

Well, gee. Guess so. It’s just that . . . you know, he’s been on this upward arc, unfazed by behemoth meanies, blindside blitzes, blundering teammates, injuries, distractions and silly media questions. After 23 wins, more than any quarterback in his first two NFL years, it seemed as if he would just, you know, keep going.

Which is exactly what he said his intentions were for Sunday’s regular season finale at home against St. Louis, a game that swings the NFC’s entire playoff lineup.

“The biggest thing for me,” Wilson said, “is just continue to do what I’ve done all year — be consistent and be clutch when we need it. Be the calm in the storm. I’m not going to waver, I never will. Never have, never will.”

Wilson is so convincing, he has persuaded his immediate boss, offensive coordinator Darrell Bevell. Asked Tuesday if he was concerned about Wilson’s recent play, Bevell said, “Not at all. He plays well all of the time, he puts forth great effort, he works hard, he communicates with our guys really well. There is no doubt that he’ll get it done.”

Then again, if something were wrong with him physically, or within the offense, it’s unlikely Wilson or Bevell would say so publicly. Not that it would be much help to Rams coach Jeff Fisher.

He already had his team so dialed into to the Seahawks offense that in the Oct. 28 meeting in St. Louis, Seattle had season lows in yards (135), first downs (seven), third-down conversions (two) and a season-high seven sacks. The Seahawks won 14-9 only because the Rams defense broke down one time when Wilson found Golden Tate for an 80-yard touchdown. Otherwise, they gained 55 yards.

Wilson was quick to point out that in the first game, the Seahawks were missing starting linemen Russell Okung, Max Unger and Breno Giacomini. Chaos was inevitable.

While that’s true, it was also true that all three were healthy for the past two games against the Giants and Cardinals. Combined in those games, the Seahawks converted five of 26 third downs.

Something is definitely going on. Again, Wilson puts the responsibility on himself, as opposed to crediting a defense for solving Seattle’s offense.

“What it really comes down to is being little bit more accurate,” he said. “That’s  just making the plays. I’m normally pretty high, percentage-wise, in terms of that. You just move on.”

It’s true that Wilson’s accuracy is off some, which is erasing Seattle’s room for error. The best example was the final offensive play of the Arizona game. It will be remembered by Seahawks fans as a poor call by officials who somehow did not see on replay what others did: That a pass intended for a diving Baldwin hit his arm and the ground simultaneously, creating an incompletion instead of the high-bounce interception that ended the Seahawks’ chances.

But if Wilson had thrown the ball to Baldwin instead of near Baldwin, there would have been no debate, and the drive would have continued.

The game was not lost on that play. The roots of the defeat go back to Fisher’s game plan in St. Louis that created a template that gets copied, with varying degrees of success, by every opposing defense.

Robert Quinn, the maniacal Rams defensive end who leads the NFL in sacks with 18 and will draw votes for defensive player of the year, sacked Wilson three times that Monday night. He explained how some of the plan works.

“You definitely want to keep him in the pocket,” Quinn said of Wilson. “Force him to become a pocket quarterback, because he’s definitely dangerous if he gets out the pocket. He can make all of the throws when he’s outside the pocket, or take off running.

“So we definitely want to keep him in the pocket. He’s a shorter guy, so knocking the offensive linemen back makes it hard for him to see who to throw to.”

Wilson knows the strategy, and isn’t buying its effectiveness.

“Not really, to be honest with you,” he said. “That’s usually always the case, always has been. Ever since I started playing football, most people try to keep me inside the pocket.  They don’t want me to get outside. But they haven’t really done anything in particular that has really stopped us, or stopped me, from running.

“I try to look down field and try to throw it to the right guy at the right time. If it’s not there, try to run it and get the first down.”

Yet, if third-down conversion numbers are added from the most recent games against the three division foes, plus the Giants, who have a good defense, the Seahawks are 13 for 49, a ghastly 26.5 percent. Third down had been where Wilson did his best work, since teams were having a hard time guessing his options.

Now, however, they simply deny him the run and dare him to beat the defense over the top. Lately, he hasn’t been so good. Nor has he had the services of either Sidney Rice or Percy Harvin, receivers who could erase a few of Wilson’s inaccuracies with either length or speed.

Wilson also could be helped by improvement in an area that only fullback Michael Robinson is honest enough to offer up.

“We’re not blocking well enough as a group up front to have the success we’re accustomed to having,” he said. “That’s what’s gotta happen this week.

“I don’t worry about Russell, he’s fine. He’s a vet now. To be good in this league in general, he has to be his own biggest critic. If somebody says he did great, he’ll point to not carrying out a fake, or throwing too low. That’s the biggest thing in his success so far.”

So if Robinson reputation for honesty is well-earned, Wilson probably didn’t have a bad day. He’s just part of an offense that needs to get smarter and more clever Sunday, now that the league has caught up.