Thiel: End and beginning for Huskies in bowl win

The bowl game itself mattered less than usual. It was the statement the Huskies players made about perseverance that will linger from the Fight Hunger Bowl. 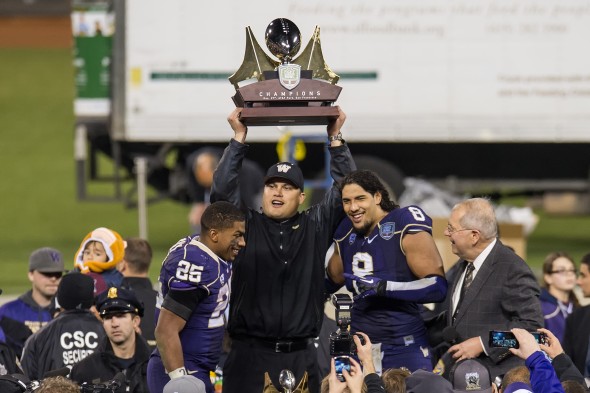 In the numbing pantheon of minor bowl games, the 2013 Fight Hunger Bowl will not figure for gold plating. Which doesn’t mean that the University of Washington players shouldn’t be intensely proud of the 31-16 shutdown of Brigham Young Friday night in San Francisco’s AT&T Park.

Shaken by coach Steve Sarkisian’s departure and rattled by a potential rules-violation scandal, the Huskies nevertheless rolled. Under interim coach Marques Tuiasosopo, who may not have a job Saturday morning, the Huskies scored touchdowns on the opening drive of each half, then shut out BYU in the second half to reach a nine-win season for the first time since Tuiasosopo’s senior-year Rose Bowl team of 2000.

At the end of the game, Tuiasosopo and defensive coordinator Justin Wilcox were doused with buckets of Gatorade, and smiles and hugs went around. Appreciation for the coaches who remained through the bowl was apparent.

Wilcox was reported by cbssports.com Friday morning to be leaving Saturday to join Sarkisian at USC. But Friday night he helped shut down a BYU offense that accumulated 297 yards in 52 plays in a wild first half. The Huskies’ ability to pull together a tight second half was another tribute to the resolve of this group of players in their last game together.

“It wasn’t difficult at all,” Hau’oli Kikaha, the defensive player of the game, told KJR radio of keeping the team together. “Anyone who doesn’t want to be here doesn’t have to be here.”

Of the coaches who stayed, he said, “They were great guys to stick with coaching in the fashion that they have. Coaches are able to leave to do what they want. They could have shut down, but they persevered with us.”

Tuiasosopo will turn over the team Saturday to new head coach Chris Petersen, who deliberately stayed away from game week and San Francisco to minimize confusion and concentrate on salvaging recruiting. But Tuiasosopo managed to keep heads and hearts of his players on the game and not the tumult, no small feat.

“The season we had helped them get through the last couple of weeks,” Tuiasosopo told KJR, referring to the ups and downs. “They joined forces with the staff that stayed. I can’t say enough about the leaders on this team. They said nothing that happened would affect what they wanted to do. Everyone had to buy in, even though it wasn’t going to be perfect for everyone.”

After some miserable tackling in the first half allowed BYU 297 yards and four scores, Wilcox, in what amounted to his farewell moment, got after his soon-to-be former team.

“In the first half, we put our defense in poor situations,” Tuiasosopo said. “I can’t say enough about Wilcox. At halftime, he challenged them and they responded.

“I knew we would come out fired up, ready to play. It was fun to watch the guys fight for it.”

Asked whether the moment also had some melancholy, Tuiasosopo said, “I don’t feel that. It was a great closure to the the season, regardless of what happens. The fact that we could end it the way we wanted to, makes you feel really good about the work we put in.”

Linebacker John Timu, who led Washington with 14 tackles, including a sack, a tackle for loss and an interception, was especially pleased.

“Talk about adversity,” he said. “We went through the worst scenario a college team can go through. But it was, ‘man down, man up,’ whether it was injuries or whatever. Doesn’t matter what the scenario, you gotta step up.

“Doesn’t matter who our coach is. We can do it.”

By the fourth quarter, two key men were down. QB Keith Price may have had a broken rib, and RB Bishop Sankey, after gaining 95 yards that included two TDs, injured his right hand. Up stepped Cyler Miles for Price and Jesse Callier for Sankey.

They didn’t work up a scoring drive, but they and the defense held the 15-point lead late, something Washington State failed to do six days earlier against Colorado State in losing the New Mexico Bowl.

Describing the month since the Apple Cup win and Sarkisian’s departure, Price said, “It was tough.I was a leader, but I had to step up to another level to keep the guys together. But it was good experience.

“Guys were hungry. We had a goal. We were going to find a way to stay together.”

In the order of power in college sports, players are dead last in importance. The Huskies in the last month were made shockingly aware of that truth. Then the did a good thing: They persevered.

The final score carried little meaning, but what the players achieved Friday should always be considered a benchmark achievement in the history of UW sports.

And Chris Petersen gets to inherit all the benefits.