Seattle secured home field advantage throughout the playoffs Sunday by winning the NFC West. Two home wins will send them to the Super Bowl at MetLife Stadium. 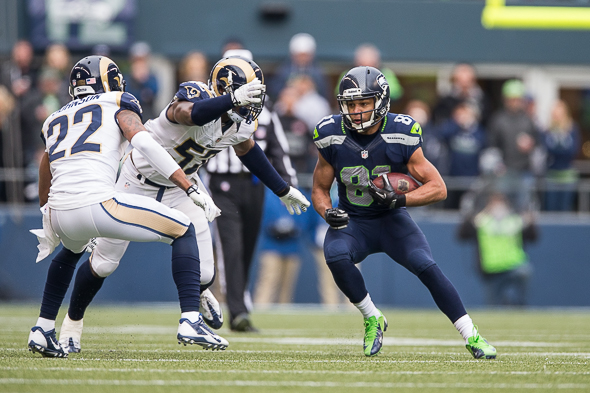 WR Golden Tate caught a career-high eight passes for 129 yards and a touchdown Sunday as the Seahawks clinched the No. 1 seed in the NFC with a 27-9 victory over the St. Louis Rams. / Drew McKenzie, Sportspress Northwest

The Seahawks are on a fast track to the Super Bowl after stuffing the St. Louis Rams 27-9 in a contentious flag-fest Sunday at CenturyLink Field. In winning its eighth division title in franchise history and second in four years, Seattle secured the NFC’s No. 1 seed and home-field advantage throughout the playoffs. The Seahawks have a bye next week and can make a return trip to MetLife Stadium Feb. 2 by winning two more home games.

The Seahawks face one among Green Bay, San Francisco or New Orleans in their first playoff game, depending on Sunday night results.

The Seahawks finished 13-3, matching a franchise best by the 2005 team, won for the 20th time in 24 games, and triumphed in overwhelming fashion, reversing the events of Oct. 28 in St. Louis when the Rams stymied the Seahawks offensively.

In that game, the Seahawks totaled 135 yards and managed seven first downs. They had 20 first downs Sunday and 269 yards while also delivering another superlative defensive performance.

The Seahawks intercepted two more passes — 11 in the past three games — and held the Rams to 158 yards, just 13 rushing on 18 carries. The Rams also went 2-for-13 on third downs and didn’t run an offensive play in Seattle territory until midway through the third quarter.

“I think we played a special game on defense,” safety Earl Thomas told FOX Sports. “We got a couple of more games left at home and now we have a special opportunity. We did a great job of closing out the season right. As we go forward, home field means a lot. Magic happens at CenturyLink.”

“It was a fabulous day,” coach Pete Carroll added. “We’re really pumped. We took care of the football, stuck it to them defensively and we’re really excited about what’s coming up. I thought Marshawn Lynch was really aggressive, just the way we like. Russell Wilson made a lot of great decisions and, defensively, we played the running game as good as you could play it.”

“We played a great football game,” Wilson said. “Golden Tate had a great game and Marshawn Lynch is something special. This gives us some momentum going into the playoffs.”

The game featured 19 penalties, including five unsportsmanlike conduct flags on the Rams. Four penalties were called on one play in the first half — three on St. Louis, one on Seattle — and three more were whistled against St. Louis on one play in the second half, including two on Kendall Langford that resulted in his ejection.

Lynch finished with 97 rushing yards. Although failing to hit the 100-yard mark for the sixth consecutive week, his 14th rushing touchdown of the season in the third quarter pushed Seattle to a 20-3 lead, effectively determining the outcome.

Wilson completed 15 of 23 for 172 yards and a touchdown. More important, he did not throw an interception and finished with a rating of 102.1 after posting a 47.6 last week against Arizona.

The Seahawks went 3-and-out on their first series when Wilson overthrew Doug Baldwin on third down, but LB Smith intercepted a Kellen Clemens panic throw and returned it 37 yards for a touchdown to give Seattle a 7-0 lead. The interception was the league-leading 27th for the Seahawks.

“It glanced off the running back’s fingertips and I was able to get it,” said Smith. “It worked in our favor.”

The Seahawks extended the lead to 10-0 at 6:14 of the second quarter on Hauschka’s 28-yard field goal following Seattle’s first sustained drive of the game, most of it featuring Lynch, who ran for 24 yards. St. Louis DE Robert Quinn ruined Seattle’s chance for a touchdown by sacking Wilson (Quinn’s 19th) at the 10-yard line on second down.

Byron Maxwell snagged his fourth interception of the season at the 5:28 mark, setting up the Seahawks up at the St. Louis 48. Wilson threw a spot-on pass to Luke Willson, who dropped it in field-goal territory, and the Seahawks failed to convert on third down for their fifth consecutive time, spoiling a chance to enhance their lead.

Seattle had another touchdown opportunity just before halftime, but a Russell Okung holding penalty — Okung’s third of the game — on Quinn nullified what could have been seven points, forcing the Seahawks to settle for a 35-yard field goal from Hauschka. Seattle converted two third-down plays during the drive after starting the game 0-for-5.

Austin Pettis returned a punt 32 yards to the Seattle 31 early in the third quarter and the Rams capitalized, getting a 36-yard field goal from Greg Zuerlein to cut Seattle’s lead to 13-3. The field goal would not have happened if three Seahawks, including Richard Sherman, hadn’t collided in the end zone, jarring the ball loose while attempting to intercept Clemens.

Lynch scored his touchdown at 2:21 of the third on a one-yard run to give the Seahawks a 20-3 lead. That culminated a drive during which the Rams were called for three unsportsmanlike conduct penalties on one play and Langford was ejected for making contact with an official and for throwing his helmet.

A Wilson-to-Tate 47-yard TD at 9:23 of the fourth served as the knockout punch as Seattle took a 27-3 lead. The play was almost identical to a play in the first meeting between the teams that resulted in an 80-yard touchdown. A garbage-time, Clemens-to-Jared Cook touchdown, culminating a 71-yard drive, at 4:13 accounted for the final margin.

NOTES: The Seahawks lost a chance to set an NFL record for fewest punt return yards allowed early in the third quarter when Austin Pettis broke one for 32 yards. The Seahawks finished with 82 yards allowed. The modern NFL record is 49 by the 2008 Atlanta Falcons . . . TE Luke Willson suffered a high ankle sprain and the prognosis for his return isn’t yet clear. . . Five of the last six No. 1 seeds failed to win the Super Bowl . . . The division title was Pete Carroll’s second in Seattle . . . The Seahawks set a franchise record for point differential in a season at +186.