Thiel: Home field is what it’s about for Seahawks

For 11 months, the Seahawks made winning the NFC West title the one and only goal. Thanks in part to a petulant bunch of Rams, the deed is done. 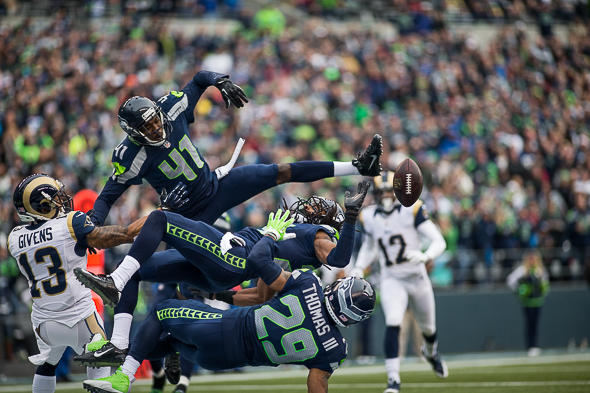 The Legion of Boom was too good for its own good. Byron Maxwell (41), Richard Sherman (25) and Earl Thomas (29) arrive in the end zone in the same spot to deny the ball to the Rams’ Chris Givens, as well as themselves. / Drew McKenzie, Sportspress Northwest

The campaign that began 11 months ago in Atlanta concluded Sunday with FS Earl Thomas rolling upon the “Thank You 12s” banner painted upon the Clink rug — his way of celebrating the relationship between team and fans that is like no other in the NFL.

“We are connected,” he said. Or as WR Golden Tate put it, “I wish I could do more to show how much we appreciate the fans.” Then DT Red Bryant, explaining the defense’s hip-swerving sack dances, said, “It’s just us showing our appreciation for (fans) with our enthusiasm.”

We’re going to hold it there, before all this gooey affection plunges from PG to X-rated. But the football love was returned — one and possibly two more home games in the playoffs, starting Jan. 11.

That was the point of the campaign — by winning the NFC West title, they avoid long postseason road trips, as they had last year to Washington, D.C., and Atlanta,  that shave chances for ultimate success.

“I’m really proud of this day,” said coach Pete Carroll. “We get a chance to start this playoff thing here . . . our fans have just been extraordinary.”

After the 27-9 triumph over the unnerved, ill-tempered St. Louis Rams, all the team-wide, season-long cliches about staying in the now, making each week championship week and believing they have accomplished little, finally bore real-time rewards.

For the buy-in, here’s the takeaway: They get a week off before they host one among Green Bay, San Francisco or New Orleans, whichever is the lowest seed after games in the wild card round. The Seahawks didn’t play Green Bay this season, but 49ers lost by 26 and the Saints by 27 at the Clink.

That’s why the win Sunday was a big deal. Teams would rather snack on radioactive nails than play in Seattle.

It was also a big deal since the Seahawks lost two of the previous three games, both to division rivals. That caused a reduction in the number of rose petals being thrown locally and nationally at the feet of the Seahawks, and an increase in anxiety among fans the Seahawks may have been exposed.

Not everything was fixed Sunday, but against a formidable St. Louis defense, they had 269 yards of offense and 20 first downs, compared 135 and seven in the first meeting Oct. 28. They still converted only four of 13 third downs.

But when the defense can hold an opponent to 13 rushing yards, the threat of defeat rolls away. That tied the franchise record (Green Bay, 1990) and completed a season in which it led the NFL in fewest points allowed per game (14.4), fewest yards (273.6), fewest passing yards (172), and most interceptions (28) and largest turnover margin (+20).

“There’s not many teams that win 13 games,” Bryant said. “The sky is the limit for us.”

They also crossed a threshold in emotional maturity when they kept relatively calm in the face of a reckless inferno stirred by Rams coach Jeff Fisher.

At 7-8, the Rams had nothing at stake and played like it in terms of foolishness. St. Louis was flagged an astonishing 21 times, but nine were offset by Seahawks penalties on the same play. The Rams finished officially with 12 penalties for 87 yards, which is significant when the offense managed only 158. At one point late in the third quarter, they had more yards lost to penalties than gained on offense.

Asked whether the normally hyper-aggressive Seahawks planned to hold back from the second punch to rope-a-dope the Rams, WR Doug Baldwin smiled, said he couldn’t say, then finally conceded, “Of course.”

“There were times where we could have got in some trouble with those guys,” he said, “but we kind of let them do their thing and they messed up, not us.”

Or as Bryant put it in a more down-home way, “We ain’t gonna put up with that s—.”

The biggest mess-up came in the third quarter when Rams DT Kendall Langford was ejected for striking, albeit accidentally, a referee who walked into Langford’s arm-swinging gesture. Langford was so enraged that he slammed his helmet to the turf in anger. Then he left the field to heckles from Seahawks fans, to whom he returned verbal fire.

“I didn’t know I got a flag for (accidentally hitting the ref), let alone get kicked out of the game,” Langford said. “I thought it was a bad call. I apologize for throwing the helmet.

“At the end of the day, we can’t hurt ourselves as a team with all these penalties. But I’m not going to say all the penalties were good calls.”

Both teams have a reputation for mouthiness, abetted by the divisional familiarity. But the Seahawks, who added to their league-leading total with seven more penalties for 65 yards, managed to stand back at the right time. Amid their best scoring drive of the past two games, an 80-yard, 14-play marathon that consumed 8:28, the Seahawks stood back as LB Alec Ogletree hit Lynch out of bounds at the St. Louis 22-yard line after he gained a yard.

That roughness call was the first of four penalties over two plays. After RB Robert Turbin rushed for no gain, Ogletree was busted again for a late hit. Langford entered the game as a sub, started talking with his wayward arm and was penalized and ejected. Then he threw his helmet and, apparently, was double-ejected.

The referees long-marched the ball down to a Seattle first down at the 2-yard line, where after one play, Lynch scored for a 20-3 lead to wrap up any doubt about the outcome.

“I’ve never seen that many personal fouls called after the play,” said Seahawks TE Zach Miller. “The one guy that got thrown out really lost it. It was kind of a crazy sequence. But I feel like we handled it well, scoring on touchdown on the drive. That’s what you’re supposed to do.”

The Seahawks did what they were supposed to do, Sunday and for the past 11 months. Through all the injuries, the controversies over drug busts, the mystery around newcomer Percy Harvin and the late-season offensive slowdown, the Seahawks are the best team in the NFC and in the best position to succeed in the playoffs.