The Seahawks play one among Packers, Saints or 49ers in two weeks in the divisional playoffs. Question: Which potential opponent is best for Seattle? Vote here. 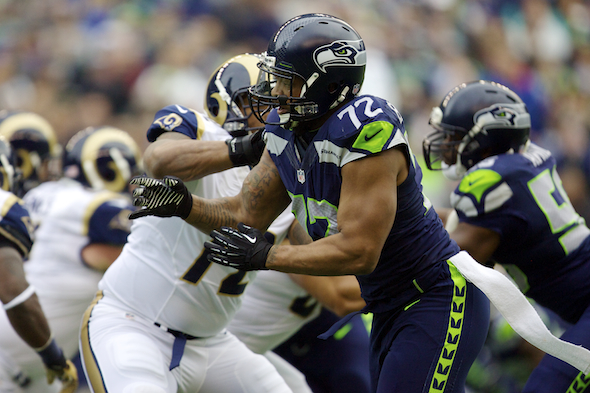 After tying a franchise record for fewest rushing yards (13) allowed in their 27-9 victory over St. Louis Sunday, the Seahawks have a week off before hosting one among Green Bay, New Orleans or San Francisco in the divisional round of the playoffs in two weeks. Seattle’s combined record at home the past two seasons against those three: 4-0.

In the infamous “Fail Mary” game, Golden Tate shoved a Green Bay defender out of the way, grappled with another for the ball, and was a awarded a disputed touchdown, officially 24 yards from Russell Wilson, on the final play. The national outrage against the NFL’s replacement referees reached its apex after the call, and helped settle the labor dispute. Tate also caught a 41-yard TD. Seattle’ defense beat up on Aaron Rodgers, sacking him eight times, four by Chris Clemons, all in the first half. Clemons’ performance matched Derrick Thomas’s 1992 NFL record.

Wilson threw a career-high four touchdowns, Marshawn Lynch rushed for 111 yards and scored two first-half TDs, and Richard Sherman returned Red Bryant’s blocked field goal 90 yards for another score as Pete Carroll snapped a three-game losing streak to arch-nemesis Jim Harbaugh. The Seahawks converted 11 of 13 third downs as Wilson finished with a Total QBR of 97.6, the highest allowed by the 49ers in a game since the start of the 2008 season.

Marshawn Lynch scored on runs of 14 and 2 yards and added a 7-yard TD reception in the second half, Seattle flustered Colin Kaepernick into his worst passing game as a starter (127 yards, 3 interceptions, 20.1 passer rating), forced the 49ers into five turnovers, and held them to no TDs in a game for only the third time since 1979. The Seahawks did all almost all of their damage in the second half. The 5-0 halftime score was the first in the NFL since 1992.

Wilson threw for 319 yards and three touchdowns and finished with a quarterback rating of 139.6 as the Seahawks became the first team to clinch a playoff spot. The Seahawks held QB Drew Brees to 147 yards and prevented the Saints from cracking 100 yards of total offense until midway through the third quarter. Although the Seahawks played without CB Brandon Browner (injured) and CB Walter Thurmond (suspension), Brees failed to complete a pass longer than 15 yards, the first time that had happened to him since 2006.

Based solely on numbers, Green Bay has the weakest defense of three potential playoff opponents, and therefore the best matchup for Seattle’s inconsistent offense. But the Packers also feature the most productive offense, especially with Rodgers back at quarterback. They average 26.1 points, same as Seattle. So which of the three would you most like to see Seattle play (see poll below)?

WILSON! By completing 15 of 23 for 172 yards with one touchdown and no interceptions, Russell Wilson compiled a 102.1 passer rating against the Rams, enabling him to finish the regular season at 101.2. That’s the highest single-season mark by a Seahawks quarterback with a minimum of 160 attempts, slightly ahead of Wilson’s 100.0 in 2012. The single-season record prior to Wilson: 98.2 by Matt Hasselbeck in 2005.

Had OT Russell Okung not been caught holding DE Robert Quinn just before halftime, Wilson’s touchdown pass to Golden Tate would not have been nullified. He would have finished the season with 27 TDs instead of 26. In that event, Wilson would have 53 to show for his first two seasons, one more than Peyton Manning in his first two (1998-99).

Wilson and Manning are tied for second on the list, behind Marino’s 68.

Wilson’s average gain is 8.09 yards, highest in franchise history, breaking the mark of 7.31 by Dave Krieg from 1980-91. Wilson is also the franchise record holder for highest percent of passes going for touchdowns (6.5) and lowest percentage of passes intercepted (2.38).

SPEAKING OF RYAN: The Seattle punter was not among the six Seahawks (Richard Sherman, Earl Thomas, Kam Chancellor, Max Unger, Marshawn Lynch and Russell Wilson) or three alternates (Steven Hauschka, Russell Okung, Golden Tate) named to the Pro Bowl Friday. He probably should have been.

Although Ryan ranked 19th in net punting yards — the stat apparently used to select Pro Bowl punters — he ranked first in fair catches and second in return yards against (82) and average return against (3.9). A 32-yard return by Austin Pettis in the second half Sunday kept him from leading the NFL in the latter two categories, and prevented the Seahawks from setting an NFL record for fewest punt return yards allowed in a season.

They entered Sunday’s game having allowed 25 in 15 games and permitted the Rams 57 on five returns. Minus net punting average, Ryan had a year comparable to both Pro Bowl punters — Miami’s Brandon Fields and Johnny Hekker of the Rams — and probably a better year than Fields, who allowed 407 yards on returns to Ryan’s 82.