Lowering the club record for points against to 14.4 per game was an achievement that Pete Carroll perhaps was proudest of in the wake of a 13-3 regular season. 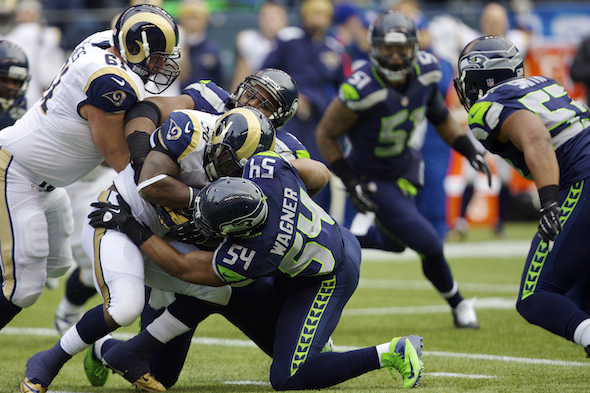 Among the feats attendant to the Seahawks’ claim Sunday of the top seed in the NFC playoffs is one that stands out to defense-minded Pete Carroll: The Seahawks broke the club’s record for fewest points allowed, set a year ago. They gave up 14.4 points per game compared to 15.3.

“That’s big time,” he said on his weekly ESPN 710 radio show Monday morning. “It’s a tremendous statement about where we are now. It’s very reassuring . . . something to be very proud of.”

The defense’s ability to dominate is a big part of the reason why the team’s 2-2 finish doesn’t seem to trouble Carroll, who is always quick to turn a negative into a positive.

“There wasn’t going to be an easy way for this division to be won,” he said. “This was a huge accomplishment, and why it was the goal of the program to win the NFC West.

“The (2-2) finish of the season was important to us. They learned there were further reaches of involvement . . . immersing themselves so they got right. I think guys studied more appropriately. For a young team to learn that, and not the hard way, we’re very fortunate.

“(Winning the division earlier) wasn’t just a next step taken, and guys had a few weeks to lay around.  I’m glad, in a sense, because it kept us on our game; we might not have otherwise. But I would have taken that challenge (of winning earlier). I’d love to have had it.”

Regarding the 27-9 win over the Rams, Carroll said LB Malcolm Smith’s first-quarter interception that he returned 37 yards for a touchdown was perhaps the difference-making moment in the game.

“The game takes a shape, and it’s my job to figure out what it takes that day to get the game won,” he said. “The (pick-six) was a great moment; a statement that said, ‘You better watch out, we’re gonna score again.’

“It was a very difficult (moment) for a team coming to our place. When the Rams came back again and couldn’t get a yard running the ball, and their quarterback was concerned (about passing), that meant, ‘Let’s take care of the football. Let’s wait it out.'”

Carroll’s deliberate conservatism with lower-risk offensive play calls meant in part that the Seahawks failed to convert a third down in the first half. But it also meant they reduced the chances of a very good Rams defense doing something to reverse the game’s momentum.

“At halftime, I didn’t tell (OC) Darrell Bevell to change anything about the way the game was called. We said, ‘You have this defense going, so let’s play to the defense.’ Did that change what Darrell called? No. You just have to be cognizant about what’s going on. Sometimes it can be the other way around, where we can’t slow them down.

“It’s not a drastic shift, but an awareness. I reminded (QB Russell Wilson) constantly to take care of the ball. If we don’t give them the football, the game’s ours.”

Of the chaotic game in which the Rams were flagged 21 times, with 12 accepted for 87 yards in losses, Carroll was pleased that his guys largely kept their cool. He said only LB Mike Morgan lost it and drew a personal foul when he attempted to bait an opponent.

“Other than that, we were great,” he said. “I thought it was championship poise. We knew what it would be like that going in, and we wanted it to not affect us.

“It looked like a hockey match out of control. It was amusing to see. I thought officials did a fantastic job with a very difficult game to call. Of course, I’d say that: We won.”

Carroll all but said WR Percy Harvin will be put on injured reserve this week, bringing an end to his season but allowing the Seahawks to bring onto the roster a player who can help.

They are already another man down, as LB K.J. Wright is recovering from a surgery to fix a broken bone in his right foot, and hopes to be back.

The Seahawks played Sunday without WR Jermaine Kearse, who suited up but didn’t get in because of a sprained ankle. The Seahawks completed only 15 passes, eight to Golden Tate. The Seahawks also lost backup TE Luke Willson to a sprained ankle (not a broken bone, as was originally feared), and ended up using WRs Ricardo Lockette and Ryan Walters more than anticipated.

But Harvin isn’t likely to be part of the solution this season.

“We’ll get to the bottom of it by middle of this week,” Carroll said. “It’s been a very difficult struggle for him. It’s a personal thing right now. He’s worked very hard to make it back, and he’s not gotten over the hump. He needs an off-season to get back full strength.

“We’ll have an extraordinary football player next season.”