How to make Seattle a sports empire in one year

After some major personnel moves in 2013, it’s possible to imagine that 2014 in Seattle sports could have aspirations to success throughout. Even the Mariners. No  question about fan support is in Seattle. Now it’s time for the sports enterprises to deliver. / Drew McKenzie, Sportspress Northwest

Things changed momentously in Seattle sports in 2013. The Seahawks, Mariners, Sounders and Washington Huskies football busted some big-time personnel moves. The most audacious enterprise — Chris Hansen’s attempt to build a basketball/hockey arena in SoDo — fell short, but remains alive. With fresh ideas, it can work.

So let’s have a little fun: Let’s imagine Seattle as a big-time sports empire.

All it takes is one deed per team.

As a hub of wealth and technology, Pugetopolis has the ingredients to be a sports success too. Such ambition is no longer such a reach because the sick man of Seattle sports, the Mariners, finally went Dennis Rodman — they tatted up, dyed blond and ear-plugged on the way to giving Robinson Cano, the off-season’s biggest free agent, $240 million over 10 years.

It’s as if Elmer Fudd twerked.

The other sports enterprises are much closer to success, but there is an intriguing possibility that most or all could peak at once with a move or two.

Here’s one guy’s imagination for transformation in 2014.

By far the most complicated endeavor, because Hansen is making something out of nothing. At this point, he has to consider something he has so far refused to do: Another site.

The reason Hansen appeared to go momentarily crazy in May, upping the bid to buy and 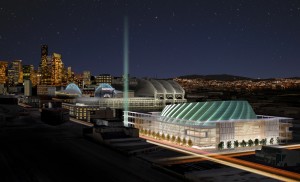 The arena in SoDo is attracting much opposition.

relocate the NBA Sacramento Kings, was because he had MOU and MO — a memorandum of understanding for an arena plan from the city, and momentum.

But after the NBA rejected his bid, and the NHL leaks periodic cruel teases but no serious relocation ideas, momentum is gone. So is Mayor Mike McGinn, Hansen’s strongest political supporter. More significantly, opponents of the arena location have been given time to armor up — Hansen’s worst fear, and why he conducted such a stealth operation prior to the February 2011 disclosure of his plans.

Without debating the merits of either side’s claims, there is no doubt the opposition has combined forces and tactics to pick apart the funding as well as the site. Be aware that the biggest foe has the least profile — railroad interests. In the local pecking order, trains come first. And they’re not moving any rights of way.

Some in city politics want to see the arena at Seattle Center, either replacing entirely KeyArena, or on the grounds of Memorial Stadium currently owned by the school district. Hansen is opposed because he can’t own the land that would also house his real money-maker: The entertainment district he wants to create on the SoDo site.

Hansen has a lot of money behind him, and ultimately wants to create a long-term civic asset. What he needs are a lot fewer foes in a hard-to-please town.

Short of an in-house sale of the franchise to Bellevue tech billionaire John Stanton, a 10 percent owner and a man wise in baseball and the future, the Mariners should hire Tony La Russa as president. Additionally, they need to create a shop of big-data analytics for baseball personnel as well as sports consumer habits. 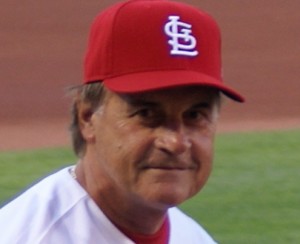 La Russa needs to be given full baseball/financial control, while moving CEO Howard Lincoln to emeritus status to help get the stink off the operation after disclosures by Eric Wedge and other former employees. La Russa has the baseball stature and cred Seattle long has lacked. At 69, La Russa would be a transitional figure, not a long-term guy, and that’s good because if/when Nintendo of America sells, Stanton or whomever will have a right to choose a successor.

The high-end data enterprise is a mandatory minimum to keep the slow-to-change Mariners competitive in a sophisticated consumer market where developments in technology will force strategic changes every season, if not every half-inning.

Make the Sounders Osvaldo Alonso’s team, and give him the stature to tell Clint Dempsey, Obafemi Martins and anyone else on the pitch to shut the hell up. Alonso is the team’s best player and the club has already made him a designated player so they can pay him better.

The Sounders have ambitions to be a world-class club, but after the clash of egos in last season’s primadonna festival, a field boss is necessary if they are to make order from chaos. Getting rid of the tempestuous Eddie Johnson is a start, but another diva is just a transfer fee away.

The importing of high-end talent after the seasonal is likely going to be a regular feature. But the introduction of U.S. star Clint Dempsey produced a miserable transition and led to one of the most embarrassing late-season collapses in the history of Seattle sports, which is saying something.

After five years of financial success, the Sounders have the resources, support and cachet to be the epicenter, not a sideshow, of American soccer.

In the last year, the Huskies solved their facilities shortcomings without needing tax dollars, and reached 9-4 with a head coach still using training wheels. Both are remarkable accomplishments, and helped land the key figure in a pending renaissance — a seasoned, successful coach at the peak of his game to succeed Steve Sarkisian. It’s rare to say something like this, but it’s true — they could not have done better than Chris Petersen.

I’m not sure what kind of offense Petersen will run in a Pac-12 giving over to the spread and up-tempo. But whatever success he will have depends on finding four-star big guys who will do for the Huskies what they are doing for Oregon and Stanford. The Huskies haven’t had a road grader practically since the days of Benji Olson.

The successes of RBs Chris Polk and Bishop Sankey as two of the greatest runners in UW history suggests that matters are far from hopeless. But the Huskies are 0-for-10 against the Ducks, and Petersen was 2-0 while at Boise State. He knows something. Imagine what he might do with better-than-average Pac-12 O-line talent.

The Cougars busted their move a year earlier with the big-money hire of Mike Leach. Two years into his tenure, Leach is the like the ancient saw about women: Can’t live with ’em, can’t live without ’em. Leach’s eccentric ways often devolve from charming to annoying, but he has a pass-first-last-always system that makes the Cougars competitive without needing premier players.

Imagine if he recruits something other than “empty corpses.”

This one is simple. Win Feb. 2, and names will be written in the mud of the Duwamish tideflats to the snows of Rainier, and every brass plaque in between.

Then imagine a Super Bowl championship as a start, not a finish.