A midseason return to fundamentals helped the Seahawks defense re-take the high ground. Opponents averaged only 10.4 points the past five games. 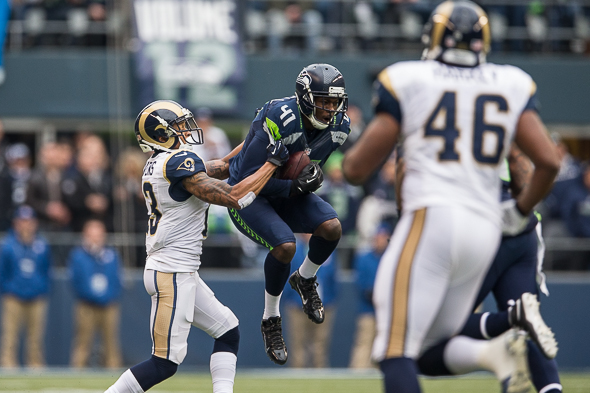 CB Byron Maxwell has stepped up in a big way during the defensive surge. / Drew McKenzie, Sportspress Northwest

NFL fans just witnessed the highest-scoring regular season in history, 46.8 points per game, breaking a 64-year-old record.  On the other hand, there’s the Seahawks defense, which in its final five games gave up an average of a 10.4 points a game. Therein lies the intrigue.

In terms of fewest points allowed in a 16-game season, the best defense was the 2000 Baltimore Ravens of Ray Lewis and Rod Woodson. They gave up an average of 10.1 points a game that season. So the Seahawks, in the late going of 2013, beat down at a near-record rate a league whose offenses have never been more prolific.

That’s not saying the Seahawks defense rates with the greats — yet. But they are getting better, because during a midseason stretch of four games where they gave up an average of 25 points, they were failing at fundamentals.

“We realized that we were going into the wrong direction,” Pete Carroll said Monday. “We were not playing really good, solid football fundamentally. It wasn’t scheme-wise, although that was part of it.

“It’s was the fundamentals of the game — all of the things that make up the high level of play that you’ve seen. We really stressed it. I think maybe the Tampa game (Nov. 3, when the Seahawks won 27-24 after being down 21-0 at the half) was probably when we turned it. It was really (about) running, hitting, tackling, leverage and pursuit, and block protection — all of those things that are so necessary. We wanted to be the best fundamental team in the league.

“We’re going to try to win with fundamentals and see if that doesn’t show up here at the end.”

Sometimes it’s hard for fans to imagine that professional players who have played so well can drift, for games at a time. But that’s where good coaching comes in, particularly when it’s realized that the Seahawks are, by average age, the fourth-youngest team in the NFL.

Carroll recalled an observation by the late Bill Walsh, the premier coach of the 49ers and Stanford Cardinal.

“He said, ‘It takes five years before you can really bank on the experience of being together,’” Carroll said. “He referred to that as the reservoir of experiences that you have that you can draw on. When you’re faced with adjustments and adaptations, you’ve been through it before. So you can swiftly make the changes.

“So (after) four years, we’re getting there. It hasn’t been everybody for four years, but there’s a nucleus of the guys that have been with us. They know our language well. They trust the background and history.  So we can make sense of things very quickly. Communication is so much clearer. It facilitates all of those things that you have to undertake to adjust, and get better all of the time. So I think that’s what’s going on here.”

The evidence backing Carroll’s explainer about how familiarity can breed success is the seamless transition the defense has made from the losses of CBs Brandon Browner and (the now returned) Walter Thurmond and LB K.J. Wright. Backups such as LBs Malcolm Smith and Mike Morgan, and CBs Byron Maxwell and Jeremy Lane, have made contributions that, far from being more vulnerable, have made the defense more solid.

Smith and Morgan go back to Carroll’s days at USC, where he recruited them, and Maxwell and Lane are sixth-round draftees who have been with Seattle for at least two seasons each. All the young guys benefit by having some supremely confident leadership from teammates in FS Earl Thomas and CB Richard Sherman.

What has developed in the late season is an effective balance between fundamental play and the risk-taking associated with creating turnovers. At 20, the Seahawks lead the NFL in turnover differential, a stat of which Carroll could not be prouder.

“I think through really clear understanding of the proportions of the emphasis — how much you can attack the football and how much you need to emphasize the fundamentals — there’s nothing more in our program that’s more important,” he said. “That’s why we say, ‘It’s all about the ball.’ That’s the first thing that I say to these guys, it’s the last thing I say to them before they go out. It’s our No. 1 emphasis.

“But they have to know how to and when to. So we’re constantly teaching and preaching what it takes. I’ve always found that some guys have a better knack for it than others.”

The Seahawks have gathered sufficient players with the knack that in the past four games they have given an average of 230 yards a game, a fair amount of which came after the outcome was in hand.

Then when audio interference is added, well, if you’re an opposing quarterback, it’s almost not worth bothering.