The Saints rebutted their critics with the first playoff road win in franchise history, and will be rewarded with a trip to Seattle, where New Orleans lost 34-7 Dec. 2. 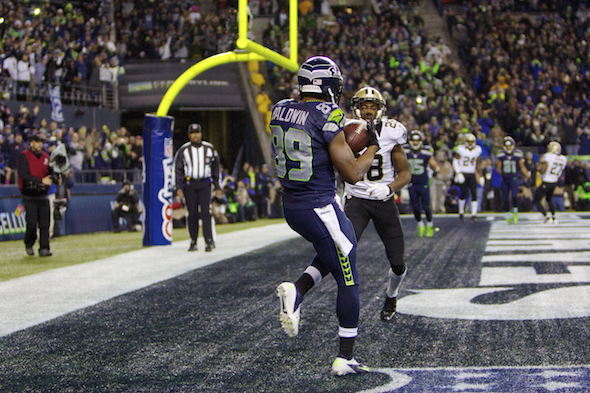 Doug Baldwin hauled in an easy touchdown against the the Saints at the Clink Dec. 2. / Drew McKenzie, Sportspress Northwest

A dramatic first day of the 2014 NFL playoffs produced an opponent for the Seahawks’ first postseason game: The New Orleans Saints, who on a chilly Saturday night in Philadelphia beat the Eagles 26-24 on a final-second field goal for the first road playoff win in the history of the franchise.

The sixth and final seed in the NFC playoff field advanced to play the No. 1-seeded  Seahawks at 1:30 p.m. Saturday at the Clink in a rematch of a regular-season rout.

On Dec. 2, the Saints arrived in Seattle with a 9-2 record, creating one of the most anticipated Monday night games in years, only to collapse in a 34-7 defeat to the 10-1 Seahawks and their surround-sound fans.

But Saturday, the Saints (12-5) disproved, for a game anyway, their critics who said they were weak on the road and in the cold. Playing without injured RB Pierre Thomas, their leading rusher, the Saints relied on RB Mark Ingram, who rushed for 97 yards, and QB Drew Brees, who was 20 of 30 for 250 yards.

More impressive was the Saints defense, which slowed down the uptempo offense designed by Eagles rookie coach Chip Kelly, the former boss of the Oregon Ducks. Philly had only 256 yards of offense.

The Saints D didn’t have nearly as much success in Seattle, and the offense was worse. The Saints rushed for 44 yards and Brees did not complete a pass beyond 15 yards. The 188 yards of offense were the fewest against Seattle since 2002.

“It’s loud, it’s crazy, they’ve got a good thing going there,” Brees said Saturday of the Seahawks, who seemed to have peaked with the Saints win. The Seahawks finished the final quarter of the regular season 2-2, including a loss to Arizona at the Clink, breaking a 14-game home winning streak.

In the only postseason meeting between the teams, the Seahawks won 41-36 in January 2011 in the famed “Beastquake” game.

The 7-9 Seahawks were the first team in NFL history to win a division title with a losing record, and the Saints were the defending Super Bowl champions. Led by Marshawn Lynch, whose 67-yard touchdown run was a seismic event, the Saints fell behind early and never took the crowd out of it. That was the fifth loss in five Saints playoff  games outside of the Big Easy since New Orleans entered the league in 1967.

A horse-collar-tackle penalty put the Saints at the Philadelphia 48-yard line. The Saints ate up clock on the ground and Shayne Graham, who tried out to be the Seahawks kicker in 2000 but was cut, scored the 32-yard game-winner.

In Saturday’s first game of the wild-card round, Andrew Luck made an early career bid for NFL immortality. He led the homestanding Colts to an astonishing 45-44 win over Kansas City, in which the Colts trailed 38-10 early in the third quarter, making for  the second-biggest comeback in NFL playoff history.

Despite three interceptions, Luck brought back the Colts with three of his four touchdown passes in the second half, including a 64-yard game-winner to T.Y. Hilton. Luck also had a rushing touchdown when he picked up a fourth-quarter fumble in the Colts backfield and scored from five yards out.

Luck finished 29 of 45 for 443 yards, the second-highest yardage total in franchise history for a playoff game. Hilton broke franchise playoff records with 13 catches and 224 yards, and also caught a second TD pass.

The Colts were one of three teams to beat Seattle, winning 34-28 Oct. 6 in Indianapolis.

The Chiefs (11-6) finished their turnaround season — they were 2-14 in 2012 — with three losses in a row. They also lost in the postseason for the eighth consecutive time, an NFL record.

The Saints’ victory means the other NFC wild-card game, a 1:30 p.m. Sunday match in frigid Green Bay between the Packers and San Francisco 49ers, will have no direct impact on the Seahawks. The winner of the game between the NFC’s fourth- and fifth-seeded teams plays at No. 2 seed Carolina next week.