The path to the Super Bowl goes through CenturyLink Field, and Seahawks fans that don’t own season tickets are paying the price. 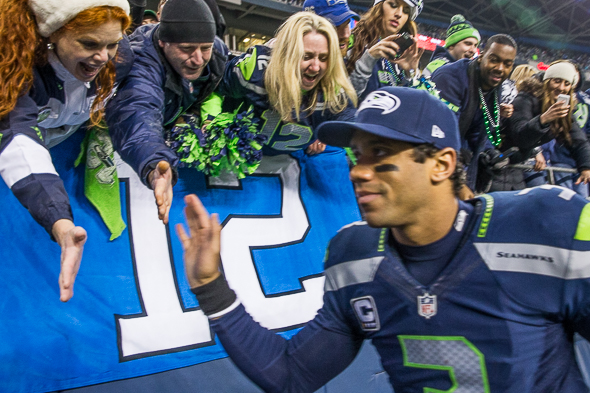 All are pricey gifts that cost less than a resold ticket to the Seahawks-Saints divisional round playoff game at CenturyLink Field. According to Seatgeek.com, a site that examines the secondary sellers market for concerts and sporting events, tickets to Saturday’s game are going for a $416 average resale price.

It’s the most in-demand divisional playoff game since the site was founded in 2009 and exceeds the average cost ($387) of the second-priciest divisional round game: A 2012 tilt between the 49ers and Saints at Candlestick Park.

That day, the game was was worth the price of admission. The 49ers won, 36-32, in thrilling fashion as quarterback Alex Smith threw the go-ahead, eight-yard touchdown to Vernon Davis with eight seconds left. San Francisco’s victory ranked among the most exciting games in Candlestick history and highlighted Jim Harbaugh’s first year as an NFL coach. The impatient will label a failure Pete Carroll’s fourth year if he can’t advance to the NFC Championship.

The demand for a divisional-round win has reached an all-time high, according to Seatgeek. Maybe, it’s because Seattle and New Orleans have history.

Saturday’s average single-game ticket is more than triple the average resale price compared to the last time the Seahawks hosted the Saints in the playoffs. In 2011, the 12th Man paid about $131 per ticket to watch a 41-36 triumph over the defending Super Bowl champion, according to Seatgeek.

The Seahawks clinched the win when running back Marshawn Lynch broke seven tackles on his way to a 67-yard touchdown run that created a seismic event.

In December, the 12th Man set off another earthquake while watching the Saints after Seahawks defensive tackle Michael Bennett returned a fumble for a touchdown. The average resold ticket for that Monday Night affair was $308, according to Seatgeek, which is 35 percent less than Saturday’s game.

The least expensive ticket is $203, but that puts the fan in the corner of CenturyLink Field’s upper deck. Lower-bowl seats start at $316, but those are in the end zone, where it’s difficult to make out yardage. Meanwhile, club seats around the 50-yard line are going for more than $2,000 per ticket.

Last week, fans had a shot to buy at face value the few thousand remaining playoff tickets, but those sold out in less than 30 minutes.

Seahawks fans needn’t worry whether Saints fans in the top one percent of income might buy up a chunk of seats.

Per Seatgeek Sunday, only four percent of traffic for the game’s ticket page came from Louisiana. More than 40 percent hailed from Washington and Oregon.

Perhaps most impressively, Seahawks-Saints is the most in-demand event of the weekend’s NFL playoff lineup. Resold tickets to the Broncos-Chargers game are going for about $355 each, with prices starting as low as $160. Panthers-49ers seats are getting resold for an average of $276 per seat, starting at $165.

Meanwhile, the peasants over in Foxborough are buying resold Patriots-Colts tickets for a $195 average, starting at $114. Freakin’ cheapskates.

That’s NFL commissioner Roger Goodell (net worth of $45 million) puffing a stogie on his secret yacht in the Cayman Islands. Don’t mind if he praises the free market like Gordon Gecko or Jordan Belfort.

For NFL fans, it would be more profitable to invest with Bernie Madoff than buy second-hand tickets to a potential NFC Championship game at CenturyLink Field. As of Monday, the cheapest seat was listed at $477.

The average price of a single-game ticket?