Seahawks’ Harvin: ‘I’m going to give it all I have’

Nearly two months after his most recent game, WR Percy Harvin says he’s ready for Saturday’s playoff game. No restrictions, so he will return kickoffs. 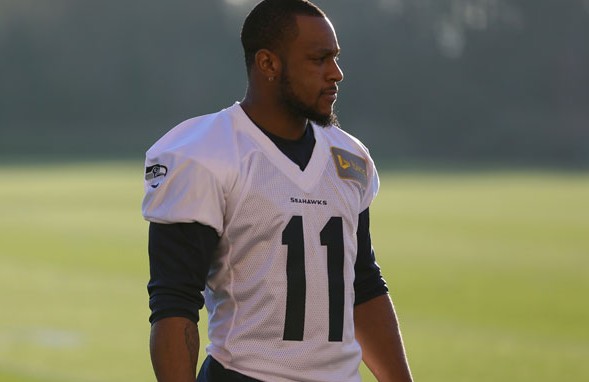 RENTON — Percy Harvin is “absolutely” coming back for the playoffs.

Harvin issued the definitive response four times after Thursday’s practice to affirm what became evident the past week when he returned to practice. He will play against the Saints in Saturday’s (1:35 p.m., FOX) divisional round game at CenturyLink Field.

“I’m going to go out there and give it all that I have,” he said, confirming coach Pete Carroll’s view that there will be “no restrictions” on his play, including returning kickoffs.

“He’s playing in the game,” said Carroll, who had grown weary of being vague with reporters about Harvin’s status. “We’re excited about him going and excited for him. It’s been a long, long haul for a guy that’s such a great competitor.

“For him to have the opportunity to join us now is really exciting for him, and for us.”

Harvin, who underwent surgery Aug. 1 to repair a torn hip labrum, played in one regular season game —  Nov. 17 against the Vikings — before returning to a rehabilitation program that included boxing, swimming and pool workouts.

Thursday Harvin said he didn’t believe he rushed his November comeback. However, he realized midway through the Vikings game that his hip hadn’t fully healed. When the Seahawks were on defense, Harvin rode a stationary bike on the sideline — a routine with in which he became familiar — to stay loose. It didn’t help.

“I kind of knew during the game that something didn’t feel quite right,” Harvin said. “It was expected, but we didn’t know to that extreme.”

After the game, his hip swelled and took on fluid. Harvin said it was one of three setbacks he had during what turned into a five-month rehabilitation.

“I had my days. They kind of went up and down. They kind of went from week to week,” Harvin said. “Going to sleep, not knowing if I was going to wake up the next morning with it swelled up . . . I knew it got real frustrating for the organization.

“It was frustrating too, knowing that I could practice one day and maybe not practice the next day. It was frustrating for a lot of people. My hats off to this organization for just staying patient with me. I’m just ready to make it all pay off.”

Eleven days ago, the coach told ESPN 710 radio he was ready to place Harvin on injured reserve. After Harvin apparently had a breakthrough workout that day, Carroll and Harvin met in what Carroll called an “eye-to-eye conversation.”

“Coach came to me with the whole IR thing. I just looked at him. I said, ‘Coach, I’m ready to play ball,'” Harvin said. “We took that, we talked to the doctors, we just kept rehabbing. I hit the practice field, and I felt pretty good.”

More important, post-practice Harvin didn’t experience pain, stiffness or swelling that kept him from playing in the last half of the regular season.

Thursday he credited teammates for helping him get to this point.

“Richard Sherman. He came to me every single day. Just letting me know that the team will keep it up. He would always say, ‘Man, we got it. We just need you to finish.'”

Carroll shot down the idea of limiting Harvin’s playing time. Against Minnesota, Harvin recorded only 16 snaps on offense but returned a kickoff 58 yards.

It wasn’t a disaster. It lasted about twice as long as last Friday’s awkward media session. RB Marshawn Lynch even had a friend.

FB Michael Robinson, who has a neighboring locker, stood smiling with his arm wrapped around Lynch.

As he did last week, Lynch had a number of one-word responses to questions from reporters. Lynch was terse when asked about his appeal of a $50,000 fine the NFL issued after he refused to speak with the media during the regular season, a violation of terms in the standard player contract that was bargained collectively with the union.

The fine wasn’t overturned but held in abeyance. Lynch doesn’t have to pay the penalty if he cooperates with reporters for the rest of the season.

Asked if he defended himself during his hearing with an NFL arbitrator, Lynch said, “That’s confidential.”

What does Lynch remember from his famous “Beastquake” touchdown run that came against the Saints in the 2011 wild card round?

If he doesn’t suffer an unlikely setback between Thursday and kickoff, Seattle tight end Luke Willson will be available Saturday after appearing to have broken a bone against the Rams in Week 17. At least, that was the rumored diagnosis.

“Something happened because they checked him out right off the bat, and it looked like he had a broken leg,” Carroll said. “They checked him out again that night, and he didn’t. So all I can tell you is that it was remarkable, whatever happened in there. There was a laying of hands or something. I don’t know what happened, but he jumped right back, and he had terrific work, and he’s ready to play.”

Safety Kam Chancellor Thursday returned to practice as a “full participant” after sitting out Wednesday’s session to rest a sore hip.