The Morris Trophy began in Seattle in 1980 to honor the Pac-10’s best offensive and defensive linemen. The award went away, to hated San Francisco. But now, it’s back. 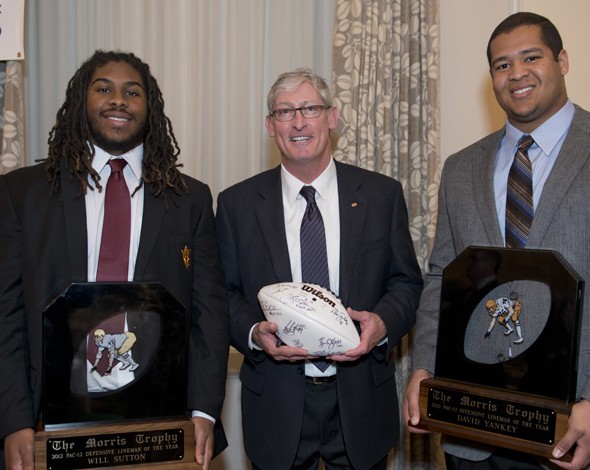 Editor’s note: In 2010 Mike Gastineau received a phone call from former University of Washington quarterback Tim Cowan, who wanted the then-KJR radio host to emcee a luncheon at the Washington Athletic Club. The prestigious Morris Trophy would be awarded to two Pac-10 Conference football players. Shortly after Gastineau agreed, he realized he had no idea what was involved. As with most of Seattle, he had never heard of the Morris Trophy.

Befitting an award born in the often quirky Northwest sports scene, the history of the Morris Trophy is unique and colorful.

The award is about as grass roots as these things can be. The idea started in the stands of Husky Stadium during a game in 1980 when a football fan, Traci Lee Morris, began to wonder why all the awards, attention, and glory in college football seemed to go exclusively to skill players.

Morris had a personal interest since she was married at the time to UW tackle Joe Sanford. As she watched the Huskies play she came up with the idea of honoring the top offensive lineman in the then-Pac-10 with an award; one that would be voted on not by the media but by the players themselves. Who better to determine the best lineman than other linemen?

The award was given for the first time after the 1980 season and continued since. Originally the award was presented at the annual Seattle Times Gold Helmet Awards in Seattle. When that banquet ceased to exist in the late 1980s, the Morris family was left with a difficult choice. They could either fund the entire award and banquet on their own, or find a new home for the trophy.

With the help of the Pac-10, a deal was struck with the PALO Club in Santa Clara, CA., where the presentation of the Morris Trophy became part of their annual “Million Dollar Awards Banquet.”

Welcome to Seattle, where our baseball team once moved to Milwaukee, our basketball team moved to Oklahoma City, and a college football trophy we invented ended up in San Francisco. The trophy might have stayed in the Bay Area, or simply gone away, had it not been for a fortuitous business meeting in Seattle in 2004.

Northwest native Patrick Crumb was, at the time, president of a Seattle company called Scout Media. He had a meeting with two business associates, Rudy Chapa and Andy Bark. Chapa was a star runner at the University of Oregon, a six-time All-America selection in track and cross-country. Bark was a wide receiver at Air Force and was running a company called Student Sports.

The trio met on an unrelated matter when Bark asked Crumb if he knew anything about the Morris Trophy. Bark told Crumb that the award had Seattle roots but had been in the Bay Area for almost two decades. Now, the PALO Club was in economic trouble and it looked again like the Morris Trophy would need a new home.

Crumb immediately was interested. He reached out to Traci Morris. With her blessing, he began working with the Washington Athletic Club and that organization’s 101 Club in what became a successful effort to bring the trophy back to Seattle.

Fittingly, when the presentation finally returned in 2005 it was James himself who presented the award at a luncheon at the WAC to defensive winner Bill Swancutt of Oregon State and offensive winner Adam Snyder of Oregon. The trophy has been presented at the WAC since.

The idea that an award would be invented here that honors linemen and is voted on by their peers is, in every positive way, a Seattle-type thing. Before we were a software, coffee, and biotech center we were as blue collar as an economy could get. We were home (still are, matter of fact) to the kind of hard workers who relate to linemen. Longshoremen and loggers, fishermen and airplane workers, the kind of people who toil often with little recognition.

The fact that the award is voted on by the players is also perfect for the process-mad Emerald City. That also matters to the players. Former Husky All-America pick Steve Emtman, winner of the defensive award in 1990 and 1991, once told Cowan that, of all the awards he won, he cherishes the Morris Trophy most, since it came from a vote of his peers (peers whom, in this case, he spent Saturday afternoons tossing around like bags of leaves).

That the award was allowed to slip away to a club in the Bay Area for years was a mistake not quite at the level of allowing the Sonics to leave, but in the same vein. History is an important part of a community’s fabric. Sports history is unique, because to a certain degree, we can all take pride in it. It’s a sad thing when that fabric unravels, It’s a rare thing when people are able to put it back together again.

That’s what happened with the Morris Trophy, a wonderful, a rare award that is back in the only home it ever truly had.

The award luncheon is noon Thursday at the Washington Athletic Club and is open to the public. Tickets are $30. For more information, contact Darrin Barr at 206-464-3074 or dbarr@wac.net.