Seahawks WR Percy Harvin made in an impact in Seattle’s divisional round win, but he sustained a concussion in the second quarter that knocked him out of the game. 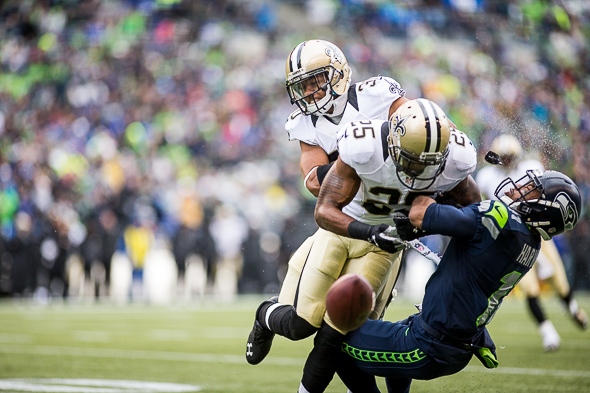 It took all of three plays on the Seahawks’ first drive before WR Percy Harvin was face down on the CenturyLink turf, hurting. Before halftime, Harvin was forced from the game after nearly catching a touchdown, only to slam his head hard to the ground in the south end zone.

Each time he was checked for a concussion, and didn’t come back after the second, a bewildering development in his first appearance since his only regular season game, Nov. 17, against the Vikings.

“That poor kid. He finally gets to play and he bangs his head on the turf really hard,” said Seahawks coach Pete Carroll. “He was OK the first time, but the second one really rocked him. He was just sick about the thought he couldn’t go back out.”

In his brief appearance, Harvin didn’t return a kickoff but caught three passes for 21 yards. He also added a nine-yard rush on a fly sweep, which set up RB Marshawn Lynch’s second-quarter touchdown run.

“If you get (Harvin rolling on that fly sweep), that’s something you gotta prepare for,” CB Richard Sherman said.

Harvin’s long-awaited return from hip surgery, which kept him out of 15 regular-season games, didn’t start well.

Harvin dropped the over-the-shoulder catch a split-second before Bush’s elbow connected. Harvin’s mouth guard went flying as his head snapped back, then hit the ground.

Harvin was motionless for a moment, then slowly went to both knees before Seahawks trainers guided him off the field. During their brief sideline evaluation, he appeared to shout something at team personnel before being ordered into the locker room for concussion testing, the standard NFL procedure.

Ten minutes later, Harvin returned to the sideline, then played in Seattle’s next series.

Late in the second quarter, Harvin made a leaping 16-yard reception, converting a third-and-8 and moving the ball to the Saints’ 35.

“That was a big-time catch, man,” QB Russell Wilson said. “(I was) just giving him a shot. He beat his guy, he got over the top and he just went up and attacked the football. That’s the thing that he does.”

The same drive, Seattle moved inside the New Orleans 10. On second down, Wilson scrambled and Harvin redirected his route toward the corner of the end zone. Wilson threw a near-perfect lob that Harvin, leaping backward, bobbled and dropped.

When Harvin stood and removed his helmet, there were rubber shards of FieldTurf smattered on his face. Harvin walked slowly to the locker room, his day finished hours before the Seahawks’ 23-15 win.

After the game, Saints defensive end Cameron Jordan wasn’t impressed with Seattle’s fleet wide receiver. An unofficial count said Harvin was in for 17 snaps, the same amount he played in November against the Vikings.

“I didn’t expect anything from Harvin. We have Keenan Lewis. Answer,” he said.

Harvin didn’t to speak to the media after the game. Carroll gave no timetable for his return. But it seems likely that, once again, Harvin’s status will be vague until game time, which will be 3:30 Sunday in the NFC championship game at the Clink.