Beastquake, the sequel, sends Seahawks ahead

Beast to the rescue as wind beat down passing game and the defense beat down the Saints. But enough was done poorly to prompt a serious week before NFC title game. 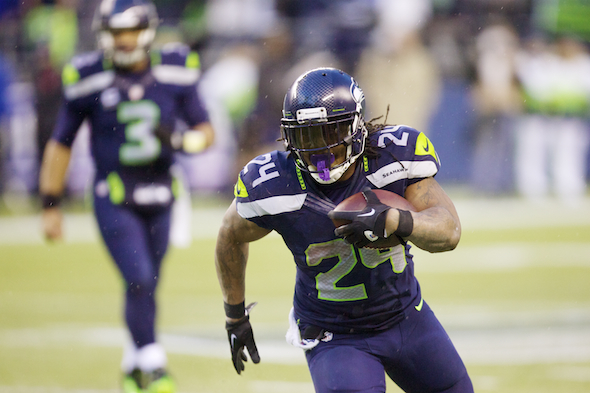 It’s just that a lot of the other stuff Sunday went as well as, oh, a punt snap into the manhood.

The Seahawks say they hadn’t run the particular play all season. Put it in just this week. With 2:48 left and holding a tenuous 16-8 led, it was time.

Called simply “power,” the O-line caved the Saints front, Lynch took the handoff, bounced outside and, behind a key block from WR Jermaine Kearse, went 31 yards for the winning score. He made a splendid downfield cutback and even threw in a stiffarm on a Saints defender, in case they forgot how the 2011 script went.

A few lockers away, Kearse recalled experiencing the same play as a collegian. The Washington Huskies in 2010 beat Cal 16-13 on a last-minute touchdown by Chris Polk on a similar tailback dive.

Both times, the play provoked a hallelujah chorus, Sunday from 68,388 Clinksters who thought they were gliding to a rout until a late Saints rally called a halt to more plate tectonics. The 23-15 win was a big deal, but an awkward route to the the NFL semifinals.

Whether natural or spiritual, the play was the last of Lynch’s 28 carries that brought him 140 yards, two touchdowns and the NFC title game at 3:3o p.m. Jan. 19 against either San Francisco or Carolina, who play Sunday.

The Accidental Oracle of Occidental Avenue was asked to explain the play.

Never has a self-summary from a great running back been delivered with such terse eloquence. And now Seahawks fans may understand why his words supplement well his deeds.

Lynch does not run to be tackled. Hello, Saints defense. Do you hear the man?

Actually, minds reeled over many things Sunday in a weird game, whipped by soaking gusts to 45 mph, that Seattle dominated despite modest offense. Through three quarters, the Seahawks defense, going back to the Dec. 2 regular-season game, allowed the Saints seven points in seven quarters.

That changed in the fourth quarter after the Saints went 74 yards in nine plays and 80 yards in nine plays, producing two touchdowns, a two-point PAT, and — after New Orleans recovered an onside kick with 26 seconds left — a Seattle-wide gulp that probably registered on seismometers.

The threat ended when New Orleans WR Marcus Colston committed the last of several plays of mystery, catching a pass at the 35-yard line with a few seconds left, then trying a cross-field lateral that was a blatant forward pass. The penalty advanced the clock 10 seconds and ended the game, causing a community exhalation that was a close second in air velocity to anything found in nature’s Sunday rudeness.

But it’s hard to overlook the fact that the Saints, despite losing a fumble, missing two field goals, having a punter take a snap in an indelicate manner and never finding their All-Pro weapon, tight end Jimmy Graham, needed to have better outcomes on just a couple of plays to have pulled off the upset.

And as stout as was the defense generally, the Seahawks missed numerous first tackles dropped a few interceptions.

“It just didn’t feel like it was normal,” said coach Pete Carroll. “It was a very good day on defense, although I’m really disappointed in the way we tackled.

“We’re thrilled to be moving on — with areas to get better and things we can continue to improve.”

That would include Russell Wilson, who survived a nightmare day for any quarterback by completing 9 of 18 passes for a meager 103 yards.

“It’s tough to throw when the wind’s blowing that bad,” said Wilson of his season-low passing performance. “When the wind is that severe, you have to be smart. There’s definitely certain circumstances where I have to be conservative and making sure that I’m not taking any shots down the field.”

It was a prudent strategy, but doesn’t account for incompletions on three short crossing routes that were not hampered by wind, pass rush or defensive backs. Plainly, Wilson’s accuracy is something to occupy the practice week, along with another health watch on WR Percy Harvin, knocked from the game before halftime with a concussion.

In eight days, the weather won’t be any better. The opponent, however, will.