Seahawks’ Bowie stepped up in win over Saints

Michael Bowie was inactive for five of the Seahawks’ final six games. But he beat out James Carpenter in practice and started his first game at left guard in win over Saints. 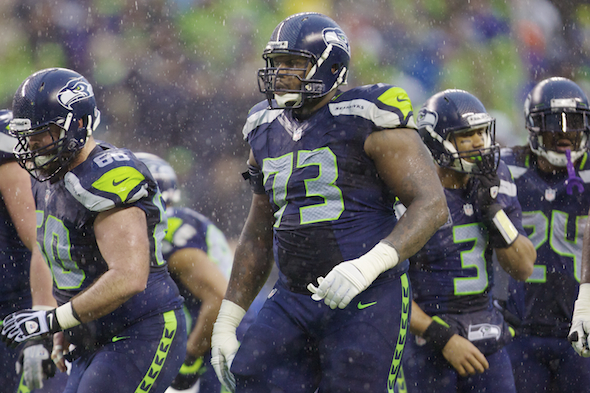 Rookie Michael Bowie made his first start at left guard in the Seahawks’ playoff win Saturday over the Saints. / Drew Sellers, Sportspress Northwest

RENTON — The Seahawks may have settled on a left guard that enhances the offensive line. Michael Bowie, a rookie, seventh-round pick the coaching staff deemed unfit to play most of the final month of the regular season, started instead of James Carpenter against the Saints.

In five of Seattle’s final six regular-season games, Bowie was healthy but listed as inactive.

So it was a bit of a surprise when Seahawks coach Pete Carroll chose to start Bowie and designate Carpenter, a former first-round draft choice, a healthy scratch a few hours before Seattle’s 23-15 win over New Orleans. He likely will remain in the lineup Sunday for the NFC Championship game against the 49ers.

“It was competition. It truly was competition,” Carroll said Monday. “Mike had done a lot of good things. We think he’s a fine athlete. He’s shown poise and smarts in the nine starts that he’s had.”

Still, changing an offensive front after a 13-3 regular season is far from typical — especially when the front is charged with opening holes for one of the league’s best running backs. Marshawn Lynch finished another impressive year (1,257 rushing yards and 12 touchdowns) in line coach Tom Cable’s zone blocking scheme.

The reasons for a shake-up were clear-cut.

Since tackles Russell Okung and Breno Giacomini returned from injury during the last month of the regular season, Carpenter and Paul McQuistan split time at left guard.

That coincided with decreased production from the offense. Though they weren’t the sole reason for the scoring drop-off, neither Carpenter nor McQuistan were playing well, and the Seahawks running game wasn’t as productive as it was.
Lynch failed to surpass 100 yards in each of the final six regular-season games and averaged just 3.52 yards per carry, more than a full yard less than his average (4.56 yards per carry) through the first ten weeks.

After Seattle capped its regular season with a 27-9 win against the Rams and drew a first-round bye in the playoffs, Carroll felt it was time to make a switch.

“With the two weeks, we said, let’s give it a shot and take a look at it. So he started in the bye week (practices) and carried it through. He did a nice job,” Carroll said.

Bowie fits well with Seattle’s stereotype of finding productive players who were overlooked, underestimated or ran afoul earlier in their careers. Before his senior year at Oklahoma State, Bowie was kicked off the team by coach Mike Gundy after violating team rules. He transferred to FCS Northeastern Oklahoma State, a lower-tier FCS school.

In April’s draft, the Seahawks took the 6-foot-4, 334-pounder in the seventh round, to the notice of almost no one. A strong preseason, as well as early injuries to Giacomini and Okung, was Bowie’s opening to the starting lineup.

Bowie started seven games at right tackle after Giacomini underwent surgery on his right knee. Against Arizona in Week 16, he started at right guard when J.R. Sweezy was out with a concussion.

“Michael Bowie’s a tremendous athlete,” quarterback Russell Wilson said Monday. “He moves his feet extremely well. He’s stepped up for us when Breno was out, when Russell Okung was out. His intelligence for the game . . .  he really loves the game of football. He has tons of talent.”

Carroll hinted Bowie will remain left of center Max Unger, assuming Bowie keeps showing in practice what he did during the two weeks leading up to the playoffs.
Not bad for a guy that, entering last week, hadn’t played left guard in the NFL.

“We thought we had some flexibility there,” Carroll said of Bowie. “He’s such a big kid. He could be a tackle. He seems very comfortable at guard, though.”

Carroll said linebacker K.J. Wright, who had surgery five weeks ago to repair a bone broken in his right foot, could return for Sunday’s game. Wright, hurt against San Francisco at Candlestick Park in early December, missed the final three weeks of the regular season and Seattle’s divisional-round win.

“We’re going to take a look at him Wednesday,” Carroll said. “He ran well today and over the weekend. He has a chance. We’re excited about that for him.”