Fervor for 49ers-Seahawks game is such that some Californians thought about coming to Seattle in January for an outdoor event. Didn’t they read about Lewis & Clark? 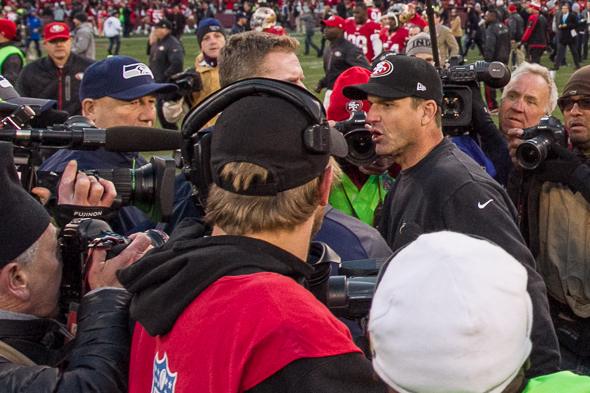 Delirium in Seattle and San Francisco over the pending football disagreement Sunday has reached a point where mayors in both cities have reached out to their colleague, Toronto mayor Rob Ford, to restore order and appeal for calm. Ford was zip-lining naked and couldn’t be reached for comment.

In Seattle, a security issue is normally the province of the police chief,  but the job occupant changes on an almost weekly basis — a policy adopted from the Seattle Mariners’ operations handbook, “Everyone is Always Interim,”  which governs tenure of the baseball manager.

New Mayor Ed Murray took charge of the problem and immediately raised the minimum wage to $50 an hour for every worker in the city, which had the desired effect of distracting many from the civic crisis of Seahawks quarterback Russell Wilson’s declining passing numbers.

But in San Francisco, Mayor Ed Lee has no similar option to change pay levels to $50, because popular opinion runs strongly against cuts. City policy prohibits any wage decrease that would diminish property values, which remain sufficiently high as to render the city unaffordable and thus unlivable, a key principle in reducing garbage pickup and BART ridership.

Unchecked, delirium in San Francisco reached its apex over the weekend when the 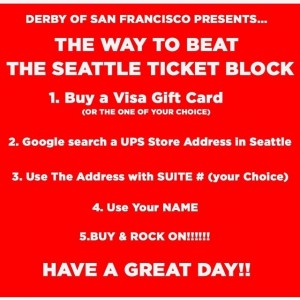 Seahawks announced that about 3,000 tickets would go on sale Monday for the Sunday game at the Clink, but only to residents of Washington, neighboring states and western Canada, AND NONE TO ADDRESSES IN CALIFORNIA.

The decision, which is within NFL rules and has precedent, nevertheless sent many in California into an 8.5 dither (all measurements in California are presented on the Richter scale for ease of use). Comment sections on fan and news websites were filled with contempt for the Seahawks and the arrogance of Seattle, and included advice on how to circumvent the ticketing software to induce a sale to Californians.

But public health officials detected in the inflammatory rhetoric a potentially serious psychological problem — a desire by Californians to go to Seattle in January for an outdoor event.

Research is incomplete, but so far there is nothing in the medical literature in California to suggest precedence.

The most recent entry regarding population migrations from the agreeable to the disagreeable ends with the logs of the Lewis & Clark expedition of 1805-06, which spent the winter at Fort Clatsop near the mouth of the Columbia River. Meriwether Lewis lamented the troubles with the Northwest winter:

. . . Our tent is not Sufficient to keep off the rain we are Compelled to have Some other resort for a Security from the repeeted Showers which fall . . .

Clearly the vast majority of newcomers to the west read the experience of the explorers, said, “Hell with that,” and made a left turn. Witnesses to the Seahawks-Saints game Saturday at the Clink saw that in the intervening 208 years, nothing changed.

The idea of potentially hundreds of Californians entering thoughtlessly into Seattle without “some other resort for a Security” created emergency planning preparations, including a “Candy-ass Crisis” hotline, in the capital of Sacramento (Motto: “Yay Kings!”). Fortunately, travail was averted when the remaining tickets were purchased in seconds by zip codes known to be allied with the 12th Regiment Audio Bombardiers.

Far as is known.

That ended one threat. Not all threats. Awkward episodes developed both cities among people attempting to understand the delirium and its perpetrators.

The San Francisco Chronicle reported that the death toll among high school English teachers attempting to parse a standard press-conference sentence by 49ers coach Jim Harbaugh, bereft of any pattern that conformed to subject-verb-object, reached seven. Police are looking at a possible eighth death after discovering a professor of freshman English at Stanford dangling by a participle after Harbaugh violently mixed a metaphor.

The problem in Seattle was a failure of public works. The tunnel-boring machine, Big Bertha, was diverted from the waterfront to the Seahawks practice facility in Renton. Its massive digging tools created a hole in Seahawks coach Pete Carroll’s verbiage big enough to insert commas, periods and spaces between words.

After a couple of commas and a few periods were installed Monday, progress ended Tuesday when Bertha struck a solid steel exclamation point. Experts considered its removal nearly impossible.

Fortunately, the risk to public health and works in the cities figures to abate by Sunday evening. Delirium will have drained. Order will be restored. One city wins will on, one side will be left to kiss biceps.