Seahawks and 49ers are about as close statistically as two teams can be. Who has the edge Sunday? As the numbers suggest, both of them do. 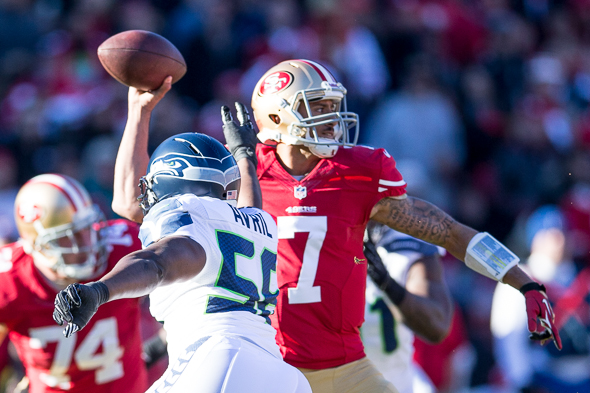 San Francisco is the hottest team in the NFL playoffs. The 49ers have won eight in a row, five on the road, including a pair in the playoffs at Green Bay (23-20) and Carolina (23-10). While the 49ers are peaking at the right time, the Seahawks have flattened. They went 2-2 in their final four regular season games before defeating New Orleans 23-15 in a divisional playoff game that came closer than it should have to getting away.

But the NFC Championship will be played in Seattle, where the Seahawks have overwhelmed the 49ers the past two years. That would seem to give a significant edge to Seattle, but Arizona proved Dec. 22 it’s possible to silence the 12th Man by scuttling the Seahawks 17-10. Needing to beat San Francisco a week later at home to reach the postseason, the Cardinals couldn’t get it done, losing 23-20.

Seattle and San Francisco are about as evenly matched as can be. Within the context of league rankings, the Seahawks finished No. 8 in scoring offense, the 49ers No. 11. Seattle has the No. 1 scoring defense, San Francisco the No. 3.

League rankings provide little illumination as to what will happen Sunday except to suggest it will be a close, low-scoring game, which is what most odds wizards are predicting. The head-to-head summary of the two previous games this season is no more enlightening in determining separation points between the top two teams in the NFC.

Seattle defeated San Francisco 29-3 at CenturyLink Sept. 15, and the 49ers prevailed 19-17 at Candlestick Park Dec. 8. But the games were closer than the point differential suggests.

There’s not a dime’s worth of difference in there except turnovers, San Francisco committing six (four interceptions, two fumbles) to Seattle’s two (both interceptions).

So does either team have an edge Sunday? Well, yes and no.

EDGE 49ERS: Jim Harbaugh’s 49ers haven’t lost since Nov. 17 at New Orleans and permitted more than 20 points only once in that stretch (24 to Atlanta). They’re also more experienced in this position, with three straight NFC title-game appearances. None of the Seahawks have been here, most glaringly Russell Wilson, shaky in the divisional round.

EDGE SEAHAWKS: The Seahawks, 16-1 at CenturyLink the past two seasons, have not allowed more than 19 points in any of their past six games, averaging 11.2 per over that stretch.

EDGE 49ERS: San Francisco held five of its past six opponents to fewer than 100 yards rushing, which includes Marshawn Lynch and the Seahawks, who totaled 86 against the Niners in their last meeting Dec. 8.

EDGE SEAHAWKS: Lynch has rushed for a touchdown and caught a pass for a touchdown twice in the same game twice in his career and both came against the 49ers, on Dec. 23, 2012 and Sept. 15, 2013. Both games were at CenturyLink.

EDGE 49ERS: San Francisco’s front seven is littered with Pro Bowlers. In fact, 71 percent of the front seven has been selected to a Pro Bowl.

EDGE SEAHAWKS: The last two times the Seahawks and 49ers met at the Clink, Lynch combined for 209 yards rushing and three touchdowns.

EDGE 49ERS: Seattle’s offense has been stagnant lately, averaging 20 points per game over the last five.

EDGE SEAHAWKS: The Seahawks know how to pile up points against San Francisco at CenturyLink, outscoring the Niners 71-16 in the last two meetings, and 46-22 this season. No team put up more points on San Francisco this year than Seattle’s 29 Sept. 15.

EDGE SEAHAWKS: Total QB Rating grades quarterbacks on a 0-100 scale with 50 about average. By this metric, Kepernick has had two “below average” starts in his NFL career and both came in Seattle – 27.6 Dec. 23, 2012 in San Francisco’s 42-13 loss, and 14.0 in Week 2 this year in a 29-3 defeat. In the latter game, Kaepernick had a career-low NFL passer rating of 20.1. Also, Kaepernick has looked far more confused than confident in Seattle, where he has completed a combined 32 of 64 passes for 371 yards with one TD and four picks.

EDGE 49ERS: No NFC quarterback with more than 300 passing attempts threw fewer interceptions than Kaepernick’s eight. Since Week 12, Kaepernick has thrown 12 touchdowns vs. two interceptions and completed 59.7 percent of his throws.

EDGE SEAHAWKS: Seattle has intercepted 12 passes since Dec. 8, including five against the Giants and four vs. Arizona. The last time Seattle played San Francisco at CenturyLink, the Seahawks sacked Kaepernick twice, hit him twice and hurried him 14 times. During the regular season, the Seahawks held opposing quarterbacks to a league-low 63.4 passer rating. Seattle’s defense ranks No. 1 in passing yards and No. 1 in interceptions, a feat accomplished by only two other teams since the 1970 merger, Miami in 1982, Tampa Bay in 2002. Both teams reached the Super Bowl.

EDGE 49ERS: Although primarily a running team, the 49ers have expanded their passing game since the return of WR Michael Crabtree Dec. 1. Crabtree has averaged 14.95 yards per catch and opened things up for WR Anquan Boldin and TE Vernon Davis. Boldin caught eight passes for 136 yards last week against Carolina.

EDGE 49ERS: Wilson’s early-season play placed him in the conversation for MVP, but he hasn’t looked like a franchise or even a Pro Bowl quarterback for five weeks. Wilson hasn’t thrown for more than 200 yards since Dec. 2, while the offense overall is averaging 266 total yards over the last five. During that span, the running game has also been limited to fewer than 90 yards per game, compared to 113 over the first 11.

EDGE SEAHAWKS: The Seahawks are talented enough to win even when Wilson is off his game. Wilson passed for 103 yards in Seattle’s victory over New Orleans last Saturday, marking the lowest passing-yardage total by a winning quarterback in any of the NFL’s last 41 postseason games, dating to when the Jets won at San Diego following the 2009 season with 93 passing yards. Wilson also defeated San Francisco earlier this season with a less-than-thrilling 63.9 passer rating.

EDGE SEAHAWKS: None of Gore’s 50-yard runs occurred at CenturyLink Field. Gore has not produced a 100-yard rushing game in Seattle since 2006, and in his last two appearances at the Clink he has combined for 44 yards on 15 carries and zero touchdowns.

EDGE 49ERS: Aside from his big catch late against the Saints, Doug Baldwin has been MIA in recent weeks. Golden Tate has struggled to get open and Jermaine Kearse hasn’t caught more than three passes in a game all year.

EDGE SEAHAWKS: Percy Harvin has yet to be cleared to play (concussion), but the last time he faced San Francisco (Sept. 23, 2012), he caught NINE passes for 89 yards and returned three kickoffs 74 yards.

EDGE 49ERS: The Seahawks finished the season ranked No. 1 in the NFL in fewest points and yards allowed, but in all three of their losses, including a 19-17 defeat to San Francisco Dec. 8, they held a lead in the fourth quarter only to see it evaporate.

EDGE SEAHAWKS: The 49ers didn’t have leads to blow in three of their four losses, scoring three points at Seattle (29-3), seven vs. Indianapolis (27-7) and nine vs. Carolina (regular season).

EDGE 49ERS: Since Harbaugh followed Pete Carroll into the pros in 2011, the Niners have beaten Seattle four of six times. In those games, the 49ers have outscored Seattle 84-57.

EDGE SEAHAWKS: In Carroll’s two wins, both at home, the Seahawks have outscored the 49ers 71-16.

With all of that, we know two things for sure: The team that scores first in this rivalry usually wins (five out of eight times). And we know that the team that wins the rushing battle ALWAYS wins. Since Carroll took over in Seattle in 2010, the team that had a statistical edge in rushing is 8-0, as the chart shows:

If San Francisco hosted this game, it would be foolish to bet against the 49ers. But it’s in Seattle, where the Seahawks have a .688 winning percentage since 2002.