Thomas: Seahawks ‘can bully whoever we want’

Anquan Boldin and Michael Crabtree have upgraded the 49ers pass offense, which means FS Earl Thomas has some big-boy bullying to do. 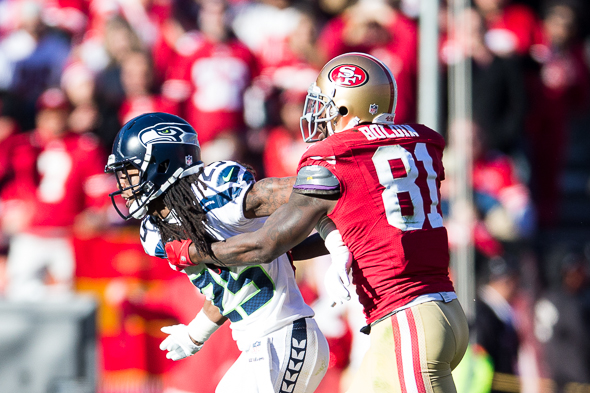 Since 49ers WR Michael Crabtree returned to the lineup Dec. 1, the 49ers are 7-0. Since San Francisco owns an eight-game winning streak, and has the look of last year’s Super Bowl runner-up, plus the addition of WR Anquan Boldin, it raises concern for the Seahawks’ No. 1-ranked pass defense.

“I like that he’s blue-collar, and I’m ready for him,” Thomas said Wednesday. “He’s a great blocker. He tried to cut me a couple of times. So we’ll meet each other again, because I’m definitely going to find where he is.”

Last weekend, in San Francisco’s divisional round win over Carolina, Boldin again led a Niners passing attack that has become increasingly potent since Crabtree returned from a torn Achilles. Against the Panthers, Boldin caught eight passes for 126 yards, helping San Francisco to a 23-10 win.

Crabtree, meanwhile, was a non-factor, making  just three catches for 26 yards. However, he caught eight passes for 125 yards during the Niners’ win over the Packers in the wild card round, including a key third-down reception that helped extend San Francisco’s game-winning drive.

Unlike last season, the Niners have two game-breaking wide receivers instead of one. And both are tall. Boldin is 6-foot-1 and Crabtree is 6-4. Yet it’s Boldin, at 220 pounds, who’s considered among the most imposing, dominant receivers in the league.

“It’s a more physical, downhill attack, and we definitely have to have or big-boy pants on this week,” Thomas said. “I think we can bully whoever we want to bully. It’s about us. It’s about a mindset.”

Last off-season, the 49ers traded a sixth-round pick to the Ravens for Boldin, agreeing to take on his $6 million salary. The Seahawks found out how well the move worked Dec. 8, in a 19-17 loss at Candlestick Park. Crabtree and Boldin both played. When the Seahawks faced a Crabtree-less Niners in Week 2, they routed San Francisco, 29-3.

In that game, Boldin caught one pass for seven yards, both season lows. In the Niners’ win over Seattle in December, Boldin led all receivers with 93 yards.

In the teams’ first meeting in the 2012 season, 49ers beat the Seahawks, 13-6, at Candlestick, coach Jim Harbaugh complained about the physical play of Seattle’s defensive backs. Harbaugh said he would ask the NFL league office to review a series of plays in which he felt the the Seahawks committed but weren’t called for pass interference and holding penalties.

Seahawks coach Pete Carroll Wednesday wasn’t buying into the thought that Seattle’s secondary was being called for fewer penalties in the playoffs.

“I keep hearing that’s what’s going to happen,” Carroll said. “That has no factor on us at all. First off, we have a style. We’ve been playing the same style for as long as (I have coached)  back to North Carolina State. It’s a long time ago we started teaching guys in this manner. It hasn’t changed or adapted to the refereeing or the time of the year, and it’s not going to do that now.”

In the NFC divisional round, Harvin caught three passes for 21 yards, and added one rush on a fly sweep that went for nine yards. However, his playoff debut ended late in the first half when he slammed his head on the end zone turf, knocking him out of the game.

LB K.J. Wright, who hasn’t played since breaking a bone in his foot against the 49ers in Week 14, practiced Wednesday. Carroll said Wright could be available for Sunday’s NFC Championship.