Seahawks fans lamenting Russell Wilson’s decline in productivity should know it’s not going to take a makeover to find success in the NFC championship Sunday against the 49ers. 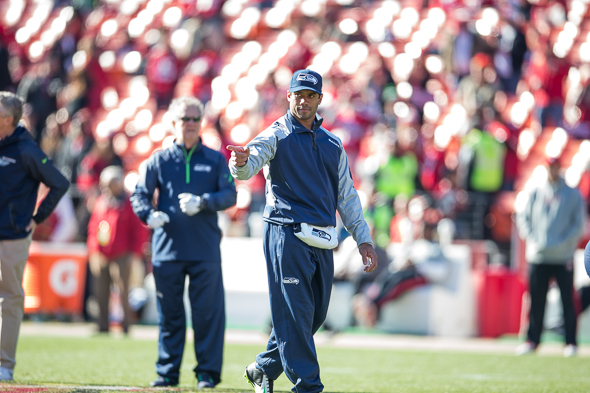 Russell Wilson tries to think of everything ahead of time, then let his practice habits take over. / Drew McKenzie, Sportspress Northwest

“For me, one of the big challenges is shutting my brain off,” Seahawks kicker Steven Hauschka said Wednesday.  “There’s only so much control you have over the kicking motion. At some point, you want your training to come out, and not think about it. Trust your instincts, trust your practice.”

That’s what any successful pro athlete does, regardless of task. The same can’t work for most fans because the brain usually isn’t engaged.  The engagement is all hormonal, so the fan’s primary instinct is fear.

Certainly that is true in Seattle, where sports championships happen with the frequency of Mt. St. Helens eruptions. (The Sonics won in 1979, the eruption was 1980; at least half the mountain is still here). The Seahawks are again close, playing for the NFC Championship against the 49ers. Which only increases the neurosis for the experienced Seattle sports fan.

The sports-title threshold bears some notable Seattle carcasses: The Sonics in 1996, the Mariners in 2001, the Seahawks in 2006, and to a lesser extent the Sounders in each of their five years.

But history is the burden of the fan. The burden of Seahawks quarterback Russell Wilson is, say, 49ers All-Pro linebacker Patrick Willis.  Wilson may have the tougher task, but at least he can do something about Willis. The sports scoreboard is forever.

Which brings us to something Wilson said Wednesday. He was asked to address the chief anxiety of fans who see the diminishing production in the passing game and have worked themselves into a state of doomsday anxiety about Sunday’s game.

Saturday against New Orleans, Wilson was 9 of 18 passing for a career-low 103 yards. Seattle won 23-15. The game wasn’t all that different from the Clink game the last time the Niners were here, a 29-3 Seattle win despite Wilson completing 8 of 19 passes for 142 yards. But fans forget that.

“I think,” said Wilson, “the biggest thing is to be more accurate on a couple throws I normally make.”

If a fan were seeking a revelation that merited trumpets and a commentary from the Pope, Wilson’s remark fell woefully short. But if you can stand a simple explanation, Wilson just offered it.

“That’s what it comes down to,” he said. “It’s nothing I need to search deep down for, or go study a whole bunch for. It’s just: Put the ball on the money, right where it needs to be.”

Obviously, that’s easier said than done, but he’s done it so many times that the odds would seem to be in his favor. Notably against the Saints, Wilson missed a couple of short slant routes that would have been easy first downs, errors that increased the whispers.

Wilson’s career from high school has been on an upward trajectory that has been unbroken, so he’s partly a victim of his own success. It’s also true that he’s in a temporary performance decline due to defenses catching up to his style of success, including limiting his chances to run from the pocket.

Even coach Pete Carroll was willing  to concede the latter point.

“Defenses have changed a little bit,” he said. “They have not wanted to deal with the (running) quarterback as much. It’s been pretty clear, which is no surprise.  The league always adapts. The coaches are too smart, players are too good.

“There was a little bit of a run of (quarterback domination in 2012) for a very short time. In the off‑season, everybody turned it around a little bit. So that definitely happened.”

It’s also fair to wonder whether the intensity Wilson has brought to his two-year run as NFL wunderkind has worn him down.

I asked him if he would even know if he was too intense.

“I guess I’m an intense guy,” he said. “I’m one of those guys that’s always in the moment and trying to be focused on what I need to do to be successful, and how can I help other people be successful.

“At the same time, I keep my poise. I’m always relaxed inside. My mind is not over-thinking.  It’s thinking about the right things.  Am I intense?  Over-intense? I think I’m just the right amount.”

An answer to that question has no measurables, has no validation except in hindsight after a loss.

So to Wilson, it seems that the angst over his decline in productivity can be dissolved with a couple of more completions. As with Hauschka, he can shut off his brain and let his training take over.  As for fans and their fears, the choice is clear: Trust in Russ, or maybe alcohol.