Seahawks WR Percy Harvin hasn’t made it back to the practice this week, and his availability for Sunday’s NFC Championship remains a question. 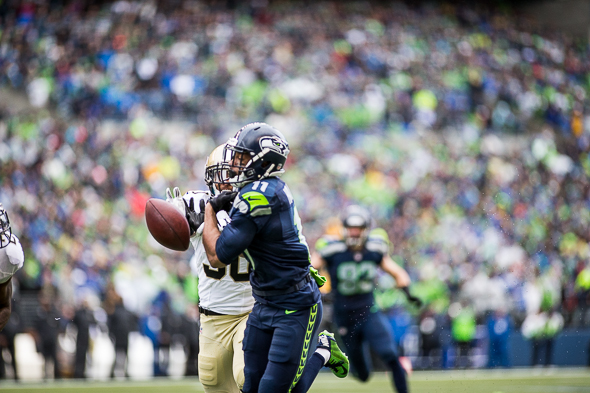 Seahawks WR Percy Harvin had three catches for 21 yards against the Saints, but was forced to leave the game at the end of the first half. / Drew McKenzie, Sportspress Northwest

Seahawks coach Pete Carroll said Thursday that he doesn’t know when WR Percy Harvin will return from the concussion that knocked him out of Seattle’s divisional round win over the Saints. Harvin didn’t practice Thursday. Carroll said that the doctors evaluating Harvin’s injury haven’t determined a timetable for his return.

“There’s a deadline from the doctors. They’re really the ones that are in charge of this thing at this point, and I don’t know what it is,” Carroll said. “They’ve got to go through the process.”

Carroll then tried to clarify the NFL’s concussion testing protocol, which can vary depending on a player’s history with head injuries and how he responds to treatment.

“That they’ve got next stages to get through. (I have) no indication to help you understand more, because I don’t know anymore.”

According to NFL guidelines, a player diagnosed the previous week with a concussion is allowed to ramp up his physical activity as he progresses through tests administered by the team’s neuropsychologist. To be cleared, the player then has to pass a test given by an unaffiliated concussion expert approved by the NFL and the NFL Players Association.

Saturday against the Saints, Harvin was forced to leave the game in the first quarter after Saints S Rafael Bush administered a helmet-first hit, for which he was penalized. Harvin was slow to get up, so Seattle doctors took him to the locker room for a concussion test. Harvin returned to the game for Seattle’s next series.

On the Seahawks’ final drive of the first half, QB Russell Wilson tried to find a leaping Harvin in the back of the end zone. Harvin dropped the pass, his head hit the ground hard, then Saints S Malcolm Jenkins hit Harvin as he laid on the ground.

Harvin was forced to the locker room for another evaluation. The second test indicated a concussion, which knocked him out of the game. He finished the first half with three catches for 21 yards and added a nine-yard run.

“He makes an impact just by being on the roster,” WR Golden Tate said Thursday. “We all know he’s a dangerous player. He’s explosive. He’s fast, and he’s quick. With him on the field that’s definitely something that they have to scout for.”

“We miss him obviously, but I think we’re fine without him  . . .we feel like he gives us a better chance to win, but the show must go on.”

Meanwhile, LB K.J. Wright looks to be on track to play in Sunday’s NFC Championship (3:30 p.m., FOX). Wright was a limited participant Wednesday, though Carroll said he wouldn’t have any restrictions during Thursday’s practice.

Wright hasn’t played since breaking a bone in his foot Dec. 8 against the 49ers.