Thiel: Why so much anxiety? One good reason

Sports fans in Seattle have never been in this place where the Seahawks have taken them. The anxiety is thicker than Puget Sound fog. 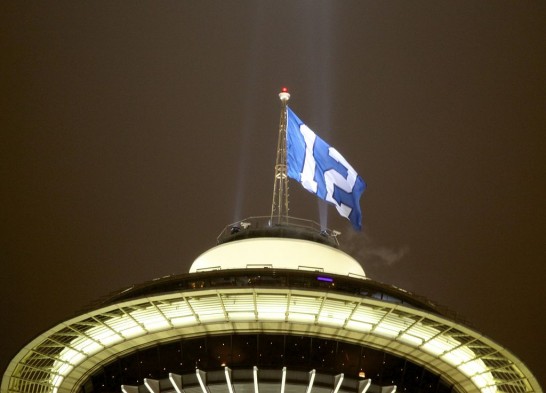 Not heavily worn, this path from Seattle to a major pro sports championship.

The Mariners made three American League Championship Series in one seven-year stretch. But in 37 years, they never made a World Series.

In a similar span, the Seahawks made the Super Bowl one time. If you don’t know what happened in Detroit in 2006, ask a friend, neighbor or co-worker. If immodesty permits, they will lift a shirt to show you the hole. It is unlikely to have healed so soon.

So yes, Sunday in Seattle is a big damn deal. It’s making some sick.

“I have to quit thinking about it,” said a friend. “But I can’t. It’s making me so nervous, my stomach hurts.”

Some variation on that theme was heard wherever I went in town this week. Certainly there are many who are confident and optimistic, and my encounters were a very small sample size, although the anxiety echoed on sports talk radio.

But the almost crippling civic bellyache, fueled by dread, makes perfect sense. Why?

Sunday’s game against the San Francisco 49ers for the NFC championship . . .

That has never happened. At least, not since the Sonics won.

The few times Seattle teams reached the pinnacle match, they were underdogs. Happy to be there. Surprised, even, to be there. Easier to be dismissed. The pressure was lessened.

This is different. The Seahawks were picked by many to be the NFC’s No. 1 badass the day after the Super Bowl, and here they are. No. 1 seed. At home to the best advantage in football, if not in all sports. A 3½-point favorite over the hottest team in the game, which has won eight in a row, including the past three on the road.

This is unknown. Terra (not Richie) Incognito. Thar be dragons. In space, no one can hear you scream.

To be expected to succeed is not in the Seattle pro sports psyche. I doubt the players share it; nearly all of them come from somewhere else, and most are too young to have any experience with the lamentable local history. Besides, they get to act on their emotions Sunday. But 99.9 percent of their fans will be chewing arms off chairs.

The 68,000 lucky ones who can act Sunday will stand on concrete for three hours and scream so hard they will separate ribs.

During an interview with a Chicago radio station Thursday, I was asked just what the hell the deal is with sports fans in Seattle.

“Pain,” I said. Emotional pain. But as my friend pointed out, it’s turning to physical pain.

Fans come by it honestly. Their skepticism is legit. In the middle 1990s, the Sonics of George Karl, Gary Payton and Shawn Kemp were a fearsome bunch. But they  unexpectedly flopped in the playoffs of 1994 and 1995. When they pulled it together in 1996 with a 64-win season and reached the Finals, they met the 72-win Chicago Bulls of Michael Jordan, Scottie Pippen and Dennis Rodman — one of greatest teams in NBA history.

The previous two years, Jordan was off chasing his baseball dream, and the Houston Rockets became two-time champions. A team the Sonics could handle. Unfortunately for Seattle fans, the Sonics at that juncture couldn’t handle themselves.

In 2001, the Mariners won 116 games, one of the most prodigious seasonal feats in sports history. “To this day,” manager Lou Piniella said years later, “I don’t know how we did that.”

But the postseason happened after 9/11. Nothing was ever the same anywhere, much less baseball. The Mariners were unable to handle the world.

In 2006, Seattle was the surprise Super Bowl entrant against the much-loved Pittsburgh Steelers and Detroit homie Jerome Bettis. Even the referees regarded the Seahawks as brown shoes at a tuxedo event. The Seahawks couldn’t handle the most poorly officiated Super Bowl in history.

The peculiar breadth and depth of passion in the 12th Man phenomenon is an exertion of community will against what has happened, and what has not happened. Much pride is taken in influencing outcomes, because, well, the damn teams haven’t handled it themselves.

Prior to the 2005 season, the Seahawks won three playoff games in 30 years. Their most nationally noteworthy play was a failure, when the Raiders’ Bo Jackson nearly ran out of the Kingdome on Monday night after freight-training the Seahawks’ cartoonish doof, Brian Bosworth, the most erroneously celebrated player in team annals.

The only previous NFC Championship game in Seattle, a 34-14 win over Carolina, was a sleigh ride after a season that began 2-2 without portent of championship. It was 90 percent giddiness, 10 percent anxiety. Yet it was washed away by the semi-sinister Super Bowl outcome.

This time, the emotional metrics may be flipped. Compounding the anxiety is the opponent, the 49ers, who in a few years of NFC West play have become something Seattle, because of its geographic isolation, almost never has had — a true sports rival, also playing at a peak level. A defeat Sunday will have a multiplier effect because insufferable coach Jim Harbaugh will be happy. The villain gets the whiskey, the horse, the girl and shoots the piano player.

Team oracle Richard Sherman was asked this week to explain Seahawks-49ers from his perspective as a hired gun.

An apt assessment describing the participants. Above him in the stands, there will be hands, shaking. From the unfamiliar, unbearable heaviness of being good.