Seahawks Rally, And They’re Off To Super Bowl!

The Seahawks trailed 10-0 early, but rallied for a 23-17 win over the San Francisco 49ers Sunday in the NFC Championship game. Seattle will pay Denver in the Super Bowl. 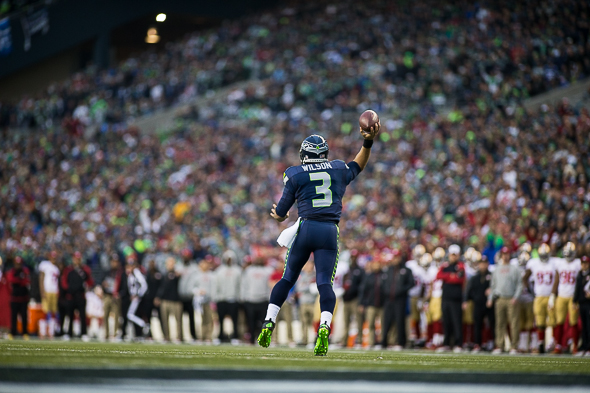 Russell Wilson and the Seahawks offense struggled in the NFC Championship Sunday, but came away with a 23-17 victory over the San Francisco 49ers to advance to the Super Bowl. / Drew McKenzie, Sportspress Northwest

Fireworks erupted over Puget Sound within moments after the end, an improbable 23-17 Seattle victory over the San Francisco 49ers that, in two weeks, will pit the Seahawks against probable MVP Peyton Manning and Denver Broncos in Super Bowl XLVIII. What seemed to be shaping up as one of the most agonizing playoff losses in Seattle sports history instead resulted in one of the great moments in the annals of Northwest sports.

The Seahawks, who trailed 10-0 early, rallied for the victory — barely. 49ers QB Colin Kaepernick made his third turnover in the 49ers’ final three possessions when Richard Sherman deflected an end-zone pass into the arms of Malcolm Smith in the final minute, clinching the victory.

Seattle makes its second appearance in the Super Bowl and first since following the 2005 season.

“This feels even sweeter than in 2006,” said owner Paul Allen, who hoisted the George Halas NFC Championship trophy three hours after raising the 12th Man flag. “It’s been amazing. The job done by Coach Pete Carroll and (GM) John Schneider to put this team together has been remarkable.”

“This is really special,” said Carroll. “It would be a mistake not to remember the connection between this team and the 12th man. It’s really amazing. This team was ready to finish and we got it done.”

“I love Seattle and I love my teammates,” said quarterback Russell Wilson. “We played so hard. It doesn’t get any better than this. We knew it was going to be a battle to the end. But why not us? To play the Denver Broncos, that’s a tremendous opportunity. Our goal now is to go 1-0 and win the whole thing.”

“We’re going down in history in two weeks,” side wide receiver Golden Tate.

“Some people thought San Francisco was the best and we proved them wrong today,” said safety Earl Thomas.

In a game that could have gone either way, the differences were Kaepernick’s mistakes, a dramatic  fourth-down gamble by Carroll and offensive coordinator Darrell Bevell, and Sherman’s deflection to Smith.

On the fourth-down play, Wilson, using a double snap count, got 49ers end Aldon Smith to jump offsides. With a free play, Wilson threw a 35-yard TD pass to Jermaine Kearse to give the Seahawks their first lead, 20-17. After a Steven Hauschka field goal to push the margin to 23-17, the defense was tasked in the final three minutes with keeping the 49ers out of the end zone.

After a first down at the Seattle 18-yard line with 30 seconds remaining, Kaepernick aimed for Michael Crabtree the end zone, which could have given the 49ers a win. But the ball was tipped up and back by Sherman into the arms of Smith, sending home a formidable San Francisco team, in its third consecutive NFC Championship,  and a record crowd at CenturyLink Field into the streets delirious.

Kaepernick nearly won the game for San Francisco by himself.

On the game’s first scrimmage play, DE Smith sacked and stripped the ball from Wilson and recovered the fumble. The defense held San Francisco to a field goal — the first points allowed on an opening drive by an opponent all season. Then the 49ers quarterback took over, bedeviling Seattle with his escapes from the pocket and designed runs.

Kaepernick rushed for more than 100 yards by halftime, including a 58-yard dash that set up Anthony Dixon’s one-yard run for a 10-0 lead. The 49ers led 10-3 at halftime, but a Marshawn Lynch 40-yard touchdown run in the third quarter tied the score.

Kaepernick threw a 26-yard touchdown pass to Anquan Boldin in the third quarter for a 17-10 lead. Hauschka sliced the San Francisco lead to 17-13 with a 40-yard field goal.

Although sacked four times, knocked down numerous times and hurried throughout the game, Wilson completed 16 of 25 passes for 215 yards and finished with a passer rating of 104.6. Lynch, held to 33 yards in the first half, finished with 109. Doug Baldwin caught six passes for 106 yards and had a 69-yard kickoff return.

“A lot of people like to throw our receivers under the bus, but Baldwin really came up big for us,” said Sherman.

Starting from their one-yard line on their third possession, the Seahawks put together a drive that had potential, but a holding penalty on Breno Giacomini and an 11-yard sack on Wilson by NaVarro Bowman ruined it.

On Seattle’s first possession of the second half, Lynch went into Beast Mode, going 40 yards for a touchdown. That was the longest run against the 49ers this season and also the longest against San Francisco in the Jim Harbaugh era.

Kaepernick came back with a 22-yard completion to Michael Crabtree and glided for 20 on a designed run. After the Seahawks stripped Kaepernick and nearly recovered a fumble, Kaepernick threw a remarkable touchdown pass to Boldin, over Earl Thomas in the end zone.

Baldwin countered with a 69-yard kickoff return to the San Francisco 34. But the Seahawks settled for Hauschka’s second field goal, a 40-yarder.

The Seahawks had all sorts of problems on their next possession, with Wilson called for intentional grounding, among other miscues. But it came down to a fourth-and-seven at the SF 35. Carroll gambled. It was a spectacular decision that instantly became one of the epic moments in Seattle sports history.